A proverb in the hand…

The Royal Society Library has acquired a copy of 'A collection of English proverbs' by John Ray FRS. Library Manager Rupert Baker puzzles over the contents.

Dogs feature prominently in some of the oddest examples: ‘Brag’s a good dog, but that he hath lost his tail’, or ‘A covetous man is like a dog in a wheel that roasteth meat for others’, anyone?

‘Strike Dawkin, the Devil is i’th’hemp’. No, I have no idea what this means either, but I do know that it can be found in a fascinating book recently acquired by the Royal Society Library, A collection of English proverbs by John Ray. 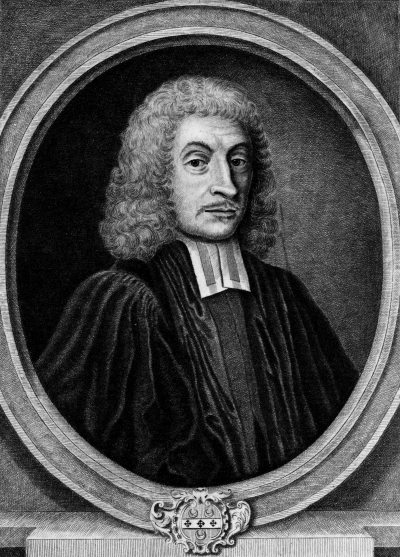 Portrait from The select remains of John Ray, 1760

Ray was one of the most prolific writers among the Society’s early Fellowship, and we hold an extensive set of his works, from important treatises on plant classification and taxonomy such as the Historia Plantarum to studies of insects, along with books describing his travels and religious beliefs. He also played an important role in the creation of Francis Willughby’s Historia Piscium.

We were therefore very pleased to be able to fill one of the gaps on our Ray shelf by purchasing, from an antiquarian bookseller opposite the British Museum, a 1678 edition of his Proverbs – it’s the second, enlarged version of a work which had first appeared eight years earlier. Funding for this new acquisition came from a legacy bequeathed to the Royal Society by Anne Ross Miller Robson, a lady from Sheffield who passed away in 2012 and kindly left us a generous sum in her will ‘to be used for the purchase of books for the Library’. 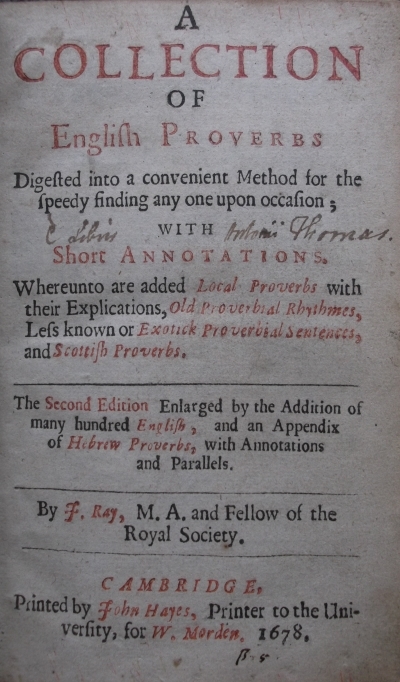 As you can see from the above title page, Ray’s book consists of a mixture of annotated English proverbs, local variants, rhymes and ‘exotick’ proverbial sentences, plus Scottish and Hebrew sections; his preface lists ‘observant and inquisitive persons’ who have sent in their favourites from all over the country. The first proverb, ‘Better to go about then to fall into the ditch’, seems sensible enough, and there’s a fair sprinkling of pithy wisdom in there: ‘In a calm sea every man is a pilot’, ‘Good ale is meat, drink and cloth’ (agreed!), ‘A mouse in time may bite in two a cable’, and the laudable ‘Giving much to the poor, doth increase a mans store’, for example. Some, such as ‘A cat may look on a King’, are still in modern use, though it’s interesting to see that possession appears to have been fractionally more important in the seventeenth century: ‘Possession is eleven points of the Law, and they say there are but twelve’, compared to the current nine-tenths.

It’s when we venture off the beaten track that Ray’s Proverbs becomes truly entertaining. Dogs feature prominently in some of the oddest examples: ‘Brag’s a good dog, but that he hath lost his tail’, or ‘A covetous man is like a dog in a wheel that roasteth meat for others’, anyone? Or, even less comprehensibly, ‘Hang a dog on a crabtree, and he’ll never love verjuyce’. Answers on a postcard for that particular specimen, please. Food, too, provides a rich source of folk wisdom, with ‘Great doings at Gregories, heat the oven twice for a custard’ (?), ‘He loves bacon well that licks the swine-sty door’, and ‘Take heed of enemies reconcil’d, and of meat twice boil’d’.

Ray notes in his preface that ‘some proverbs admitted in the former edition have given offence to sober and pious persons’, and pledges to omit these from his updated version, as ‘I would by no means be guilty of administering fewel to lust, which I am sensible needs no incentives’. There’s still a bit of a risqué giggle to be had from ‘If the bed could tell all it knows it would put many to the blush’, though, and bodily functions haven’t been fully erased: ‘A turd’s as good for a few as a pancake’, for example, and ‘Look high and fall into a cowturd’, which I shall invoke next time I’m on a country walk with my children and they start to lord it over each other. And 50 per cent of modern-day readers will still fume at the casual sexism on show, of which ‘He that tells his wife news, is but newly married’ is one of the least offensive offerings…

Notwithstanding the potential for offence, or just sheer incomprehension, we encourage you to visit the Library to take a look at Ray’s Proverbs. Meanwhile, do take note of Ray’s excellent proverbial advice: better mouse-proof those cables, and be wary when someone offers you meat twice boil’d. Or pancakes.