Visitors to the Royal Society's home in the eighteenth century included a strongman, a talking dog, and the original snake-oil salesman.

The autumn television schedules seem to be filled with the usual Saturday variety shows. I’m still waiting for the scientific one where a competitive bunch of minor celebrities get to develop nuclear fission or investigate global warming – yes, Dancing on Thin Ice would work nicely…

Looking over the Society’s financial records for the eighteenth century you’d be forgiven for thinking that the Fellows were running their own brand of entertainment revue, flea circuses included. Account books might seem terribly dull but, as I’ve been discovering, they can provide some useful insights into the detailed, colourful (and strange and occasionally hilarious) daily life of eighteenth century London in and around Crane Court, the Society’s headquarters at the time. For example, what would a librarian such as me use to dust his books in the 1720s? A fox’s tail, that’s what. 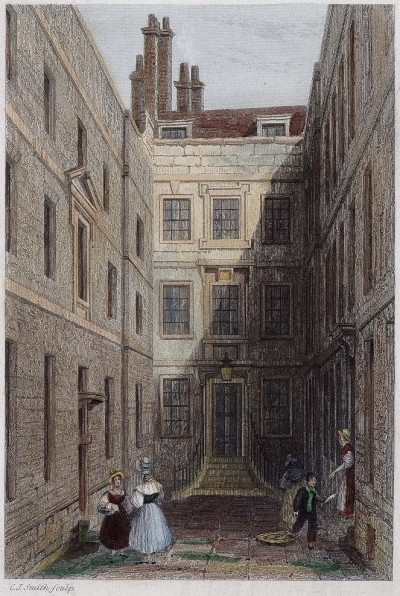 Crane Court, from an engraving by C.J. Smith

But it wasn’t just dead creatures that crossed the threshold. The Fellows viewed a hermaphrodite lobster in 1729, paying the man responsible (inevitably, a Mr Fisher) ten shillings and sixpence for the privilege. Expenses were also due to an anonymous woman (probably William Oliver’s wife) who volunteered to be bitten by a snake in 1734 – quickly followed by carriage payment for '2 boxes of Snakes & Vipers' – well you’d want to be sure, wouldn’t you? Amusingly, a subsequent account in the Philosophical Transactions notes that one William Oliver, viper-catcher of Bath, was bitten in order to test his olive oil cure – making him an original snake-oil salesman. The husband-and-wife team took no harm from this since they were bitten at Windsor Town Hall and at the Buffalo Tavern in Bloomsbury too. The Buffalo Tavern hosted theatre rehearsals for a new play in the same year, so this was certainly science as public entertainment. 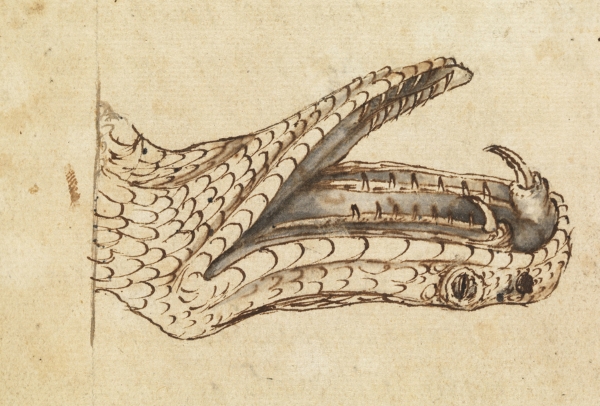 Back to Crane Court showbiz: in October 1711, five shillings were given to Mr Honnyman 'for Entertaining the Society with male and female voices' – a choir, or Honnyman himself in a vocal demonstration? John Theophilus Desaguliers (1683-1744), who was the Society’s main experimenter of the period, introduced the strongman Thomas Topham (d.1749) to Crane Court, where he demonstrated bodily feats to the gathered natural philosophers and racked up significant food and drink expenses in the process. More sadly, Edward Lambert, suffering from a rare and possibly genetic scaled skin condition, was exhibited and paid expenses from 1731: a description of him by John Machin appeared in the Philosophical Transactions and there were more visits as the Society tracked the condition of his similarly-affected male children. 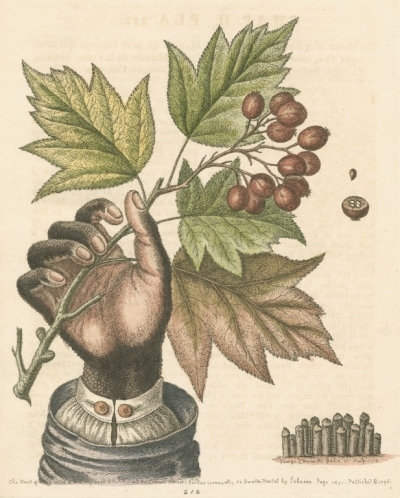 ‘The hand of a boy with a distempered skin, and a branch of the common Service Tree’ by George Edwards, 1756. 'In the year 1755, [Edward Lambert] was shewn again, in London, by the name of the Porcupine Man, with a son of his in the same condition … The figure of the hand, expressed in this plate, was taken after nature from the son.'

You have to pinch yourself to remember that some of this was in the heyday of Sir Isaac Newton. Indeed, a Presidential order for binding two copies of his Commercium Epistolicum (1712) is recorded in the accounts during May 1718. But immediately before that, Newton is also recorded as approving the usual ten-and-six to 'a German for his performance in making his Dog to speak…' Now you may have expected the mutt to communicate in his master’s language alone, but the Society’s account of the event states that the animal pronounced 'several words in English, French and High Dutch and repeated all Letters of the alphabet very distinctly by pressing the Dog’s Lips, throat and the other organs of the voice thereby articulating his sound”. Is this an early example of ventriloquism? It’s an intriguing thought but there’s just not enough detail to be sure. One thing is certain – Newton was funnier than he’s given credit for.

There is a serious side to all this of course, if like me you are interested in understanding how the Royal Society presented itself in its early homes of Gresham College and Crane Court (and there are no known sketches of the Society during this period). The information that a painted pedestal was commissioned for a bust of Charles II, or that Irish Elk horns were displayed but needed the purchase of concrete, wire, nails and a pipkin, allows you to construct a mental image of the scientific interiors of the time using the preserved expenditure records. Crane Court may appear a slightly ramshackle establishment against our modern notions of neat offices and pristine laboratory conditions – they used Thames river water for cleaning – but it is where great ideas and discoveries were made and discussed.

After getting over my initial mixed reactions of amusement and horror, it did get me thinking about the period and that perhaps, after all, people approached science in a way that was not too different. Why shouldn’t science be fun and enthralling? I’m not suggesting that Alice Roberts should offer herself up as a snake-venom guinea-pig or that Jim Al-Khalili might be better with a canine stooge, but engaging audiences is what counts. Our views on what constitutes entertainment may have changed since the eighteenth century, but the desire to communicate remains, even if the medium isn’t quite so theatrical these days. That said, I’m not forgetting that Michael Moseley gave himself tapeworms for television – I hope he was paid more than our guinea-a-bite snake-woman.