Mike Glazer is Emeritus Professor of Physics at the University of Oxford and Visiting Professor at the University of Warwick. For the special issue of Philosophical Transactions A celebrating the 350th anniversary of the journal, he has written a commentary on a paper by one of the first female Fellows of the Royal Society, Kathleen Lonsdale, on ‘Divergent beam X-ray photography of crystals’ (1947). Here he answers a few of our questions.

"She placed the crystal of interest very close to the source of an X-ray beam where its divergence would be highest. This has to be one of the simplest scientific experiments ever!"

Why was this a landmark paper?

Although the basic idea of divergent beam photography had been known for many years earlier, Lonsdale used it in a novel way. Instead of just observing it as a curious phenomenon, she applied it to determine numerical information about crystals. To do this, she placed the crystal of interest very close to the source of an X-ray beam where its divergence would be highest. This has to be one of the simplest scientific experiments ever! She went on to show how to use the technique to measure the unit cell parameter and hence the carbon-carbon bond distance in diamond to much higher precision than had hitherto been possible. This precision was such that it even enabled her to distinguish between different diamonds.

Kathleen Lonsdale was one of the first women to become a Fellow of the Royal Society at a time when women were under-represented in science. What was it that made her so influential in her time?

She had several years before determined the crystal structure of hexamethyl benzene, and proved that the benzene ring was flat. Now this idea had been suggested for a while by chemists, but they lacked the proof. Having a flat benzene ring lies at the heart of understanding the chemical nature of aromatic compounds. I should explain that her method to obtain the structure in the 1920’s involved painstaking measurements by eye and computing the atomic structure by hand. It must have taken many weeks to achieve: today it could all be done within an hour automatically. Lonsdale also played an active part in establishing the rules for specifying the symmetry of crystals and was deeply involved in the International Tables for Crystallography.

In your article, you mention that you were one of Kathleen Lonsdale’s last research students. Tell us a bit about how she influenced your career.

Working in Kathleen Lonsdale’s laboratory meant that I was exposed to a very large range of crystallographic techniques, many of which were classical and no longer used. For instance I learnt from her and members of her group how to align a crystal in an X-ray beam in several different ways that had been passed down by word of mouth and have never been published. Unfortunately, this art has now been largely forgotten because of the use of automated diffractometers, but it did mean that I had an excellent grounding in basic crystallography. My research has been in understanding the relationship between physical properties and structure, rather than on crystal structure per se. I owe this to Kathleen Lonsdale’s encouragement. 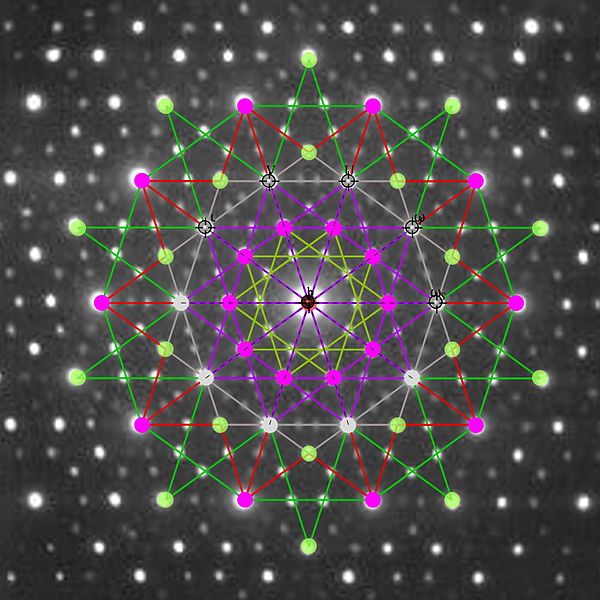 How has crystallography developed since you first worked with Kathleen Lonsdale?

The increase in computing power and the development of automated diffractometers has meant that problems that used to take me weeks to solve can now be done in a few minutes. When I started, I had to align crystals in an X-ray beam, take photographs (many of them) and measure the intensities of the spots on the films by eye. As there could be 1000 or so such spots, you can imagine how long that took. Now no-one today aligns crystals, uses X-ray photographs, nor measures diffracted intensities by eye. It is all done for them by machines using electronic detectors. Electron diffraction has also advanced tremendously, enabling individual atoms to be seen. Recently, the free-electron laser has been developed, and there are now very exciting experiments going on to use this to find the structures of proteins extremely rapidly. Another advance, for which I can claim some credit, is in the development of instruments that enable crystals in an X-ray beam to be cooled with high precision; the Cryostream was invented by John Cosier and myself. Crystallographers had always wanted to cool their crystals to reduce atomic motion and hence give better diffraction patterns, but the methods available were crude, difficult to use and therefore were generally avoided. Kathleen Lonsdale had originally cooled benzene by dropping liquid nitrogen directly onto the crystal, a very unstable method, but nevertheless worked reasonably well for her purposes. There is a nice quote by Hume-Rothery when he visited her: ‘the figure of Dr. Lonsdale appeared through a cloud of mist, like a glorified spectre of the Brocken, while her assistant pumped liquid air over a crystal’. The Cryostream changed all that and the result was the development of the new subject Cryocrystallography. I think my role in this also owes much to the training I received as a student of Kathleen Lonsdale.

More information about the anniversary issue can be found on the website. All commentaries, archive papers and supplementary files can be accessed for free. Check back at this blog for more Q&As, videos and blog posts over the coming months.