To celebrate the 350th anniversary of the first publication of Philosophical Transactions we are publishing special issues of the journal, looking at highlights from the archive.

In this guest blog post, Dr Noah Moxham tells us about the early publication process. Noah is a Postdoctoral Research Fellow at the University of St Andrews researching the history of Philosophical Transactions. 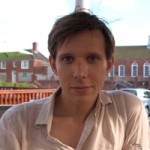 Dr Noah Moxham's PhD investigated the administrative cultures of the early Royal Society, and the various strategies of publication it experimented with in establishing and maintaining an institutional identity.

To celebrate the 350th anniversary of the first publication of Philosophical Transactions we are publishing special issues of the journal, looking at highlights from the archive. In this guest blog post, Dr Noah Moxham tells us about the early publication process. Noah is a Postdoctoral Research Fellow at the University of St Andrews researching the history of Philosophical Transactions.

Philosophical Transactions, the world’s first and longest-running scientific periodical, began life in 1665. The early journal consisted of letter-excerpts, reviews and summaries of recently-published books, and accounts of observations and experiments from European natural philosophers. Until 1753, the journal was linked to the Royal Society, but was actually run independently by the editor.

The process of submitting papers to Phil Trans during its earliest years was a little opaque. Some authors communicated their research to the founding editor, Henry Oldenburg, in the hope that he would read it out to the Royal Society; some specifically expressed the hope that he would publish it in Transactions if he saw fit. But in many cases Oldenburg simply dipped about like a magpie. Many pieces he wrote himself, summarising accounts of what had gone on in Society meetings; others he adapted or translated out of printed sources; others were cobbled together from communications on related subjects by different people. Some were printed at the specific request of the Society – a particularly interesting report or experimental demonstration might be ‘ordered for the Transactions’, although whether this expressed the will of the Society or their response to a request from Oldenburg himself is seldom clear.

By the time the Society took the journal over in 1753, it had been in practice very rare for some years for anything printed in the journal not to have been previously read to the Society; the takeover formalised this arrangement. To be considered for publication, a paper had to be communicated to the Society (by a Fellow, if the author were not a Fellow himself); and all papers read to the Society had to be considered for publication. The Secretary would read it out at a meeting, and it would then be considered by the Committee of Papers. The Committee would consider all the papers read since their previous meeting; they deliberated in silence and then voted (by secret ballot, to ward off accusations of nepotism and blackballing) on each paper – often working from the short account in the Society’s minutes rather than the paper’s full text. There were four possible verdicts: a paper might be printed, rejected, consideration of it deferred to a future meeting, or referred to someone more expert – in which case the Committee could call upon an ordinary member of the Society, who would sit in on the relevant meeting and vote not just on the specific paper he’d been called to give an opinion on but on all papers considered at that meeting. (This was not very widely applied, but it is the first instance of provision for peer review being written into the statutes of the Society).

The beginnings of peer review

Over the following century, the processes for submission and evaluation were gradually formalised, including more systematic reviewing of papers by the middle of the nineteenth century. The Society’s Committee of Papers was finally abolished in 1989, when individual Fellows were given editorial responsibility, supported both by editorial advisory boards, and by the Society’s staff of professional publishers and editorial assistants. Today, Philosophical Transactions publishes theme issues, organised and managed by Guest Editors, who handle the peer review of all papers. The other Royal Society journals also operate a rigorous peer review process.

The Royal Society archives are a fascinating catalogue of the changing practices, and we have provided some examples of the correspondence and paperwork relating to the papers featured in our anniversary issues as supplementary material. Click on the ‘Figures and Data’ tab on the commentaries to see scans of the original manuscripts, minutes from the meetings that papers were read at, and early referee reports. Highlights include Leeuwenhoek’s beautiful handwriting, Robert Hooke’s comments on Newton’s manuscript, and early referee reports on Faraday’s 1832 paper.

The anniversary issues, archive papers, supplementary material and additional videos and blogs can all be accessed for free. Physical sciences and mathematics are covered in Phil Trans A, and life sciences in Phil Trans B.