LTP and Phil Trans B

Papers on long-term potentiation published in Philosophical Transactions B.

Interview with Tim Bliss, Graham Collingridge and Richard Morris about theme issues they have edited.

Tim Bliss, Graham Collingridge and Richard Morris have co-edited two issues of Philosophical Transactions B devoted to the study of LTP. In 2003, they convened a discussion meeting at the Royal Society to celebrate the 30th anniversary of the first papers on LTP. Ten years later they held another. The proceedings of both meetings were published in Phil Trans B. This being our anniversary year – celebrating 350 years of scientific publishing – we spoke to Tim, Graham and Richard about those first papers and how P  hilosophical Transactions B had been an ideal space to communicate the latest developments in this constantly evolving, far reaching and debatable field.

LTP stands for long-term potentiation. It’s a physiological phenomenon which allows the strength of the synaptic connections between certain neurons in the brain to become stronger by activity. The idea is that the strength of connections has to be reasonably stable for the brain to operate properly – so it shouldn’t happen all the time – but that changes in its connectivity might occur when new things happen and we learn. So while LTP is in one sense a laboratory phenomenon, most neuroscientists think it is very relevant to the mystery of how the brain learns and remembers.

So what was discovered 30 years ago?

In experiments1, 2 conducted in the late 1960s it was discovered that repetitive activation of a specific pathway from the neocortex into the hippocampal formation of the mammalian brain led to a persistent increase in the strength of synapses at the very first relay – called the dentate gyrus. They documented this phenomenon and identified some of the central characteristics of what soon came to be called LTP.

A lot. A key group of scientists in Australia – David Curtis and Jeffrey Watkins – identified glutamate as the major excitatory neurotransmitter of the mammalian brain. They really should have won the Nobel Prize for Chemistry for this incredibly important discovery3. And then Graham Collingridge and Stephen Kehl in Hugh McLennan’s laboratory in Canada, went on to show that the NMDA receptor, one of several separate receptors on which glutamate acts, was critical for the induction of LTP4.

So these were the first steps in understanding the mechanism?

Yes, it would be fair to say that. However, as we all know, science is international and soon everyone piled in. Groups in Norway, Sweden, the USA as well as the United Kingdom started to contribute, and then research groups all over the world.

There was a realization that LTP could be very important – and that there were all sorts of strands of research to undertake.

It is difficult to capture all the dimensions of this – but suffice it to say that research on LTP represents a wonderful example of the emergence of neuroscience as a discrete discipline. Instead of acting as isolated anatomists, physiologists, pharmacologists or behaviourists, quite apart from the important liaison with chemists, there was rapidly a sense that we were all in it together and had much to learn from each other. And to fight about!

Certainly! One keenly disputed question was: where did the change take place? Did the synapses get stronger on the sending side or the receiving side? The zeitgeist favours a largely postsynaptic explanation, but there are all sorts of reasons for doubting that this is a complete explanation5, 6. The positive impact of this is that there is now growing realization that a full account of LTP will recognize that there are changes on both sides of the synapse – a view that both Tim Bliss and Graham Collingridge have long championed7.

And other disagreements and major issues?

At least two are worth highlighting. Much of the early work on LTP was done on synapses in the hippocampus. But of course there are lots of other synapses in the brain and some show little plasticity in the adult brain, such as those relaying visual information from the eye to the visual cortex of the brain. However, there are many other places where plasticity is essential for proper brain function and, even in the hippocampus, it turns out that the mechanisms of LTP can vary at different synapses. The terminals of the cells from different regions of the hippocampus include different kinds of glutamate receptor, called kainate receptors, and research by the team led by one of us (Graham Collingridge) has identified the key mechanisms8. Once again, there has been debate between different labs about mechanisms and the papers in Philosophical Transactions are probably the best summary of the rival positions in print.

But what about learning and memory?

Well, exactly. It is all very well working out the mechanism of change, but what of the functional relevance? Various groups have worked on this with pioneering work done by Carol Barnes and Bruce McNaughton, but the early work of one of us (Richard Morris) provided what is considered the most persuasive early evidence that pharmacologically blocking LTP can impair spatial learning9. This led on to innovative molecular-genetic work led by Nobel Laureates Eric Kandel and Susumu Tonegawa that was discussed at both meetings. A new era is now being ushered in involving the use of optogenetics, with Tonegawa’s lab providing laboratory models of memory retrieval and false memory. Three decades of work, beginning with Morris’s original observation, is summarized in the special issues of Philosophical Transactions B of 2004 and 2014. 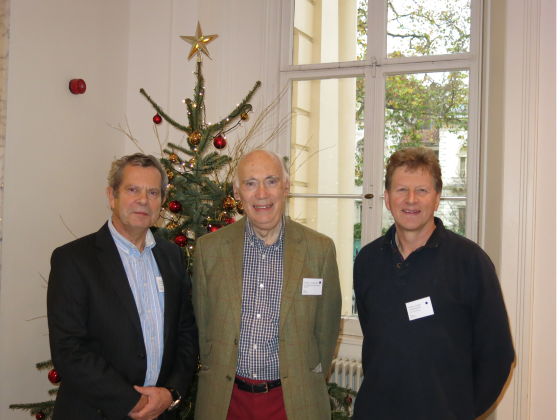 There are still all manner of important and detailed issues concerning LTP to be worked out. But an important point to note is a change between 2004 and 2014 in the general approach being taken in the field. Biomedical scientists repeatedly make the important point that basic research is fundamental for making discoveries that can lead to novel treatments. The better understanding of mechanism that comes from serious, state-of-the-art basic research, is generally a better way to make progress than direct attacks on clinical issues without that understanding. The changing atmosphere in research on LTP reflects precisely this point.

The dysfunction of LTP is widely believed to play a part in Alzheimer’s, schizophrenia, autism…

Work presented in the 2014 issue reveals that we now have a solid understanding of the molecular basis of synaptic plasticity, and this has led on to striking new findings relevant to the management of pain, post-traumatic stress disorder and other conditions where the relevance of plasticity might not have been appreciated at the outset. The dysfunction of molecular processes involved in LTP is now widely believed to play a part, maybe even a causative role, in most major brain disorders, including acute (e.g. stroke) and chronic neurodegeneration (e.g. Alzheimer’s disease), schizophrenia, autism, anxiety, depression, mental retardation and epilepsy. Many of these topics were discussed in the 2014 issue. So gradually, but now with this firmer understanding, we are moving from bench to bedside.

Finally, will there be a 50th anniversary meeting at the Royal Society?

That’s a long way in the future, but there’s likely to be many exciting new discoveries to discuss and debate, given the current level of interest surrounding LTP and the increasing sense that synaptic plasticity in general do indeed contribute to the encoding and storage of memory.

Richard Morris FRS
Professor of Neuroscience at the University of Edinburgh
As well as co-editing two issues of Phil Trans B, Richard also contributed a commentary on Marr’s 1971 paper ‘Simple memory: a theory of archicortex’ to the journal's 350th anniversary issue published earlier this year.