Alchemy in the Transactions

Today Michael Hunter, Emeritus Professor of History at Birkbeck College, University of London tells us about a very strange paper from the archive.

To celebrate 350 years of scientific publishing, we are inviting our readers to tell us about their favourite papers from the Royal Society archive. Today Michael Hunter, Emeritus Professor of History at Birkbeck College, University of London tells us about a very strange paper from the archive. Michael is the principal editor of the Works, Correspondence and workdiaries of Robert Boyle and author of ‘Boyle: Between God and Science’ (2009), as well as many other books on the intellectual history of early modern England.

I have chosen what must be one of the strangest papers ever to appear in Philosophical Transactions. It is an alchemical text by Robert Boyle, published in 1676 under the rather transparent pseudonym ‘B.R.’ It is unique in the history of the journal in that English and Latin texts were printed in parallel columns, the intention being to make the piece available both to the journal’s normal readers and to the learned adepts on the continent whose feedback Boyle wished to solicit. 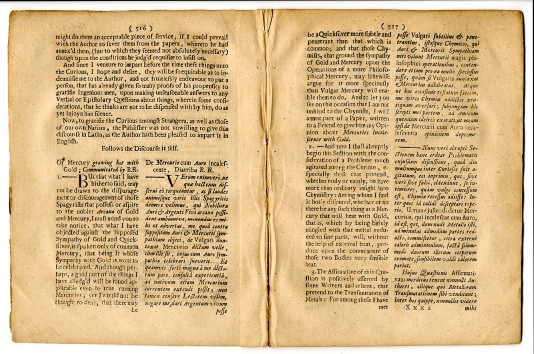 Boyle’s relationship with Philosophical Transactions, which provides the background, is interesting in itself. By the time Henry Oldenburg launched the journal in 1665 Boyle was already an established author, and its early editions include reviews of his books such as New Experiments and Observations Touching Cold (1665). But Boyle was an early convert to the format of the journal article, and in the late 1660s he became a regular contributor to the Transactions. Not only did his influential questionnaire, ‘General Heads for a Natural History of a Country, Great or small’, appear here along with other, similar items; Boyle also used the journal to publish major experimental findings, which sometimes took up a whole issue or even two successive ones. Indeed, Boyle’s experience of publishing in Philosophical Transactions seems to have affected his own preferred publication method, since the books that he brought out in the 1670s frequently comprised self-contained essays, rather similar to the ones that he had previously published in the journal. 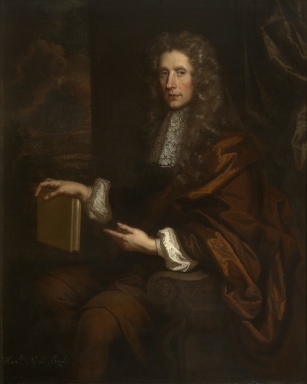 In the case of the 1676 paper, it must have been due to Boyle’s influence on his protégé, Oldenburg, that this rather bizarre piece was published. It reported on a kind of mercury that would ‘incalesce’ with gold – readily forming an amalgam, and generating heat in the course of doing so, in a way that normal mercury would not. This suggested that Boyle had achieved the longstanding aim of alchemists to create a ‘philosophical mercury’ that could transform base metals into gold, and the article was intended to invite fellow alchemical adepts to compare notes on the subject. As Boyle admits, his original trials had occurred as early as 1652 (when he had received the recipe from his American mentor, George Starkey). That he decided to ‘go public’ at this point signalled a newly intense period of alchemical activity on his part in the late 1670s which has been most fully documented by Lawrence M. Principe in his book, The Aspiring Adept: Robert Boyle and his Alchemical Quest (1998).

Just how much useful feedback Boyle received is unclear. His paper did, however, have the effect of encouraging another alchemical enthusiast, Isaac Newton, to write to Oldenburg advocating greater discretion in such matters, which were ‘not to be communicated without immense dammage to the world if there should be any verity in the Hermetick writers’. Oldenburg took the hint, and the article on the incalescence of mercury remained a one-off, not to be replicated in the history of Philosophical Transactions.