Q&A: What makes a great city?

A paper published this week in Journal of the Royal Society Interface, which combines mathematical modelling with London Crossrail, suggests that the greatest cities are those with the best connectedness. We spoke to the lead authors Dr Aaron Sim, Professor Mauricio Barahona and Professor Michael Stumpf, all from Imperial College London, about their work.

Can you explain the title ‘Great cities look small’?

A great city is one which feels smaller than it really is. The point is that this size is measured in terms of the time it takes for people to reach others to build enriching interactions, rather than in units of space.

What makes a great city?

A great city is a connected city – with a large number of opportunity-spawning, face-to-face, physical interactions between its inhabitants.

Is transport a good measure of greatness?

Only to a point. We often hear about cities with unused twelve-lane highways, railway stations connecting deserted towns, duplicate roads constructed on routes with low traffic volume, etc. The transport infrastructure is just one aspect of something deeper. Transport is a necessary ingredient of making a city better connected, but it is the interplay between the population size and distribution, the transport infrastructure, the complex geography and layout of the city, and the maximum amount of time a person is willing to spend travelling, ie the travelling time budget, that can lead to productive interactions.

How reliable is connectivity as a measure of greatness?

It is important to note that there is no single connectivity measure, simply because one has different travelling time budgets for different activities. For instance, an ideal city might be said to be one where everyone is less than ten minutes from a supermarket, half an hour from friends, an hour from the office – the latter, of course, being no more than two minutes from a decent cup of coffee! Therefore, it is important to recognise that cities are made of many competing and reinforcing activities, all of which constitute the mesh of human interactions we identify with city life. Connected cities allow for individuals to try and optimise the encounter of rewarding opportunities on different levels. These are some of the ideas underpinning our modelling work.

How did you develop the model?

In the past few years, there have been many discussions that there might exist some universal theory of cities. Most of these claims are based on the intriguing and elegant observation that the attributes of urban living – wealth, crime, innovation, etc – all scale in the same way with population size. But these power-law behaviours are simply phenomenological observations and, at best, only point to something potentially deeper. What is needed is a mechanistic model from which those empirical observations emerge naturally.
For us, the key to the puzzle was human mobility. It is the recognition that, even in the era of the internet and online social-media, having opportunities for face-to-face contact with others is why we still choose to live in cities. From this starting point, everything fell into place quite rapidly. By adapting the radiation model of mobility to social-tie formation within a city, we discovered that we could easily derive a previously conjectured empirical scaling behaviour. Using available online detailed mobility data (eg from Transport for London, Google Maps and other indicators from open data initiatives by governments and local civic authorities) we were able to test our model on real city data, rather than artificial and unrealistic simulations. 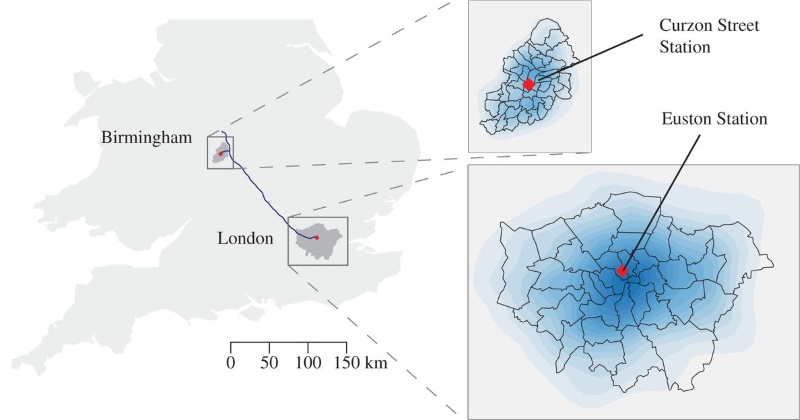 You tested the model using London Crossrail and High Speed Rail 2 as examples – what did you find out? Will these transport developments make London a greater city?

For High Speed Rail 2 (phase one only), our model predicts that the expected increase in the total connectivity of both London and Birmingham will not be much higher than 1%. Much more interesting, and usually neglected by other models however, is the dependence of the predicted increase on the average travelling-time budget. We were able to identify a ‘sweet spot’ of maximum connectivity just above the two-hour mark. If this time budget is much smaller, then the journey times, although improved, will still be too long to tempt one to travel further; if the time budget is much larger, then the expense of HS2 will simply be wasted on a population already willing to endure longer commutes.

As for London Crossrail, there is no doubt that London will be more connected as a whole. Nevertheless there are large tracks of the capital where connectivity actually decreases, in some places by 5-10%. If you run a retail shop, for example, then there is a real risk that some of your current customers might choose to hop on a fast train to your competitors than take the relatively longer walk to you, say. This is something that everyone probably knows intuitively; but, crucially, using the model we can now quantify and map out this local impact in detail. We have done this not only for the current Crossrail project under construction, but also for the proposed Crossrail 2.

Applying and testing the model to different cities, in particular to new global cities that are undergoing rapid growth in both population and infrastructure. In these cases, the challenge is the availability of data, which for many developing countries may not be as openly available or complete.

Also, what we have proposed is fundamentally a model for the evolution of networks of human interactions driven by personal optimisation and constrained and mediated through the multimodal transport infrastructure in cities. For the moment, we have only used the simplest of network properties (ie, the number of connections established), but there are certainly more network features that can be extracted beyond this average connectivity. These additional features could then be used either to paint more subtle and complex pictures of cities, or in the context of model selection with other competing models in the future.

‘Great cities look small’ is open access and available to read in full. To learn more about Journal of the Royal Society Interface please visit our website.