Dr Steve Yanoviak holds the Endowed Chair of Conservation and is Associate Professor in the Department of Biology at the University of Louisville. We spoke to him about his latest paper which shows how certain spiders living in the rainforest canopy have adapted to life up high, published today in Journal of the Royal Society Interface.

Endowed Chair of Conservation and is Associate Professor, Department of Biology, University of Louisville 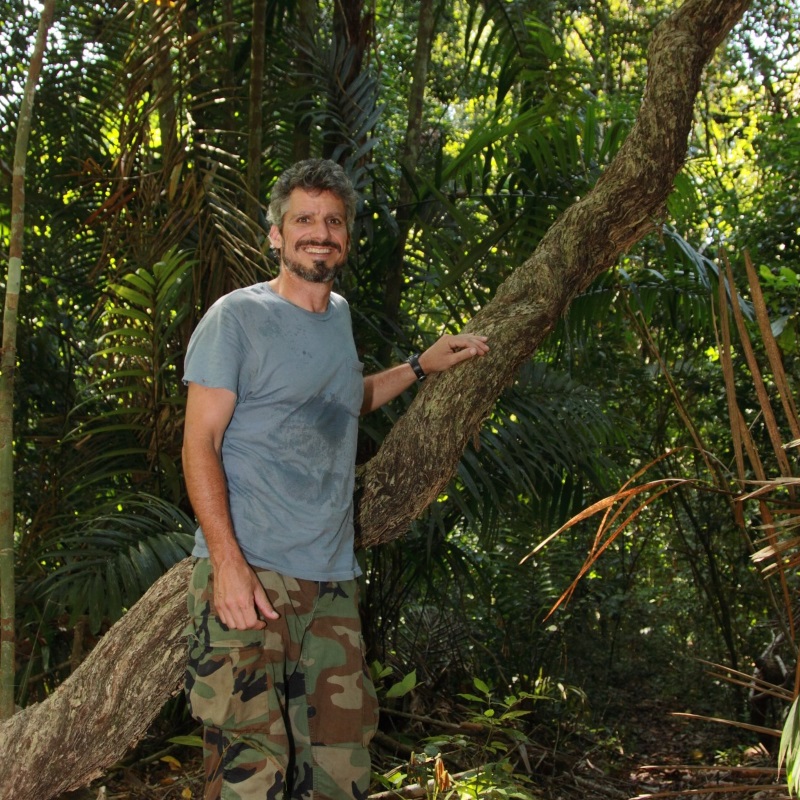 Endowed Chair of Conservation and is Associate Professor, Department of Biology, University of Louisville

Can you tell us about your research background?

During my PhD at the University of Oklahoma, I spent time in Panama conducting research which examined the ecology of animal communities inhabiting water-filled tree holes. I had to climb rainforest trees, which dramatically changed my perspective on the forest and ultimately formed the basis for two decades of subsequent research. Some of my postdoctoral research measured the effects of deforestation on mosquito communities in the Peruvian Amazon. It was during this time, climbing trees to collect canopy-dwelling mosquitoes, that I became acutely interested in the ecology and aerial behaviours of wingless arthropods.

Can you briefly summarise your paper?

This paper shows that certain spiders (in the genus Selenops) living in the rainforest canopy can glide back to tree trunks if they are dislodged or jump from the treetops. Such aerial gliding behaviour was completely unknown in spiders until now. We show that gliding performance (the ratio of vertical drop to horizontal distance travelled) declines with increasing spider mass. We also report the results of wind tunnel and video analysis, which suggest that the spiders use their forelegs to change direction while airborne.

How did you end up studying spiders in the rainforest?

The gliding spider discovery that forms the basis of this paper originated from a larger collaborative effort with Dr Robert Dudley to test for aerial behaviour in a broad range of wingless canopy arthropods. In 2005 we reported the discovery of gliding behaviour in tropical canopy ants. Before then, aerial gliding was unknown for any wingless arthropod. Subsequently, we have collected and dropped various arthropods from tree crowns to determine which species can modify their trajectory during a fall, for example by spinning or gliding. Some of my favourite test subjects included scorpions, tarantulas, bullet ants, and amblypygids.

Given that all spiders are wingless, and that none of the other arachnids we tested showed aerial behaviours, we were very surprised to discover that Selenops spiders can glide to tree trunks. After determining that the behaviour was consistent and repeatable, we decided to pursue it further as a separate project.

So what happens when a spider falls from a tree, and why is this important?

In most cases, any spider falling from a tree will land on its feet and immediately seek shelter. Unlike relatively large-bodied organisms such as primates, a fall from 30m does not visibly damage most arthropods due to their small mass and tough exoskeletons. However, the leaf litter in the rainforest understory is home to a variety of predators and scavengers, for example ants, frogs, lizards, birds, and small mammals that are accustomed to foraging in the dark and structurally complex conditions there. Moreover, many tropical forests are flooded for at least part of the year, and the resident fish commonly attack arthropods landing on the water surface.

Canopy-dwelling spiders are therefore very likely to become prey for other organisms when they fall into the understory. Although some spiders leave silk draglines behind as they fall, the spiders observed in this study did not use silk this way, and were rarely seen to use silk at all (apart from constructing egg cases). We show that some tropical canopy spiders avoid potential death in the understory by gliding to tree trunks during a fall. Such gliding behaviour is known for very few arthropod taxa, and was unexpected in spiders.

How do you measure this in the field?

Major logistical challenges included accessing tree crowns and collecting the spiders, both of which were overcome by using the canopy walkway in Peru and by climbing trees in Panama. The spiders are very fast and difficult to collect while hanging from a rope next to a tree trunk, so the walkway really made completion of this study possible.

Once settled on a tree branch or on a canopy platform, a spider was dropped by quickly launching it from a container and carefully following its trajectory to a landing point. The spiders are fairly unpredictable and not easy to handle, so preventing their escape was pretty challenging and required a lot of patience. Because we were unable to recapture individual spiders after testing them, we had only one opportunity to obtain good video of gliding behaviour for any particular spider, and success was never guaranteed. The field methods for this project generally were very fun and always exciting, but considerably more challenging in practice than they appear to be in writing.

What does the data tell us about the evolution of spiders, or evolution in general?

Many species of canopy-dwelling wingless animals, from spiders to primates, possess conspicuous specialized traits to support an arboreal lifestyle. Some of these traits, like prehensile tails, adhesive toes, etc. clearly prevent animals from falling. The alternative strategy, aerial gliding, allows canopy animals to control the speed and direction of a fall. Gliding behaviour occurs in many canopy vertebrates including mammals, lizards, snakes, and frogs, and usually involves some specialized morphology like a patagium (a wing-like structure, as in flying squirrels) or a temporary flattening of the body (as in gliding snakes). The gliding spiders documented in this study are a special case in which directionality and aerodynamic lift are created by subtle movements of appendages rather than by changing the overall shape of the body. This is interesting in an evolutionary context because it shows how very different (and unrelated) taxa have different adaptations to solve a similar problem. 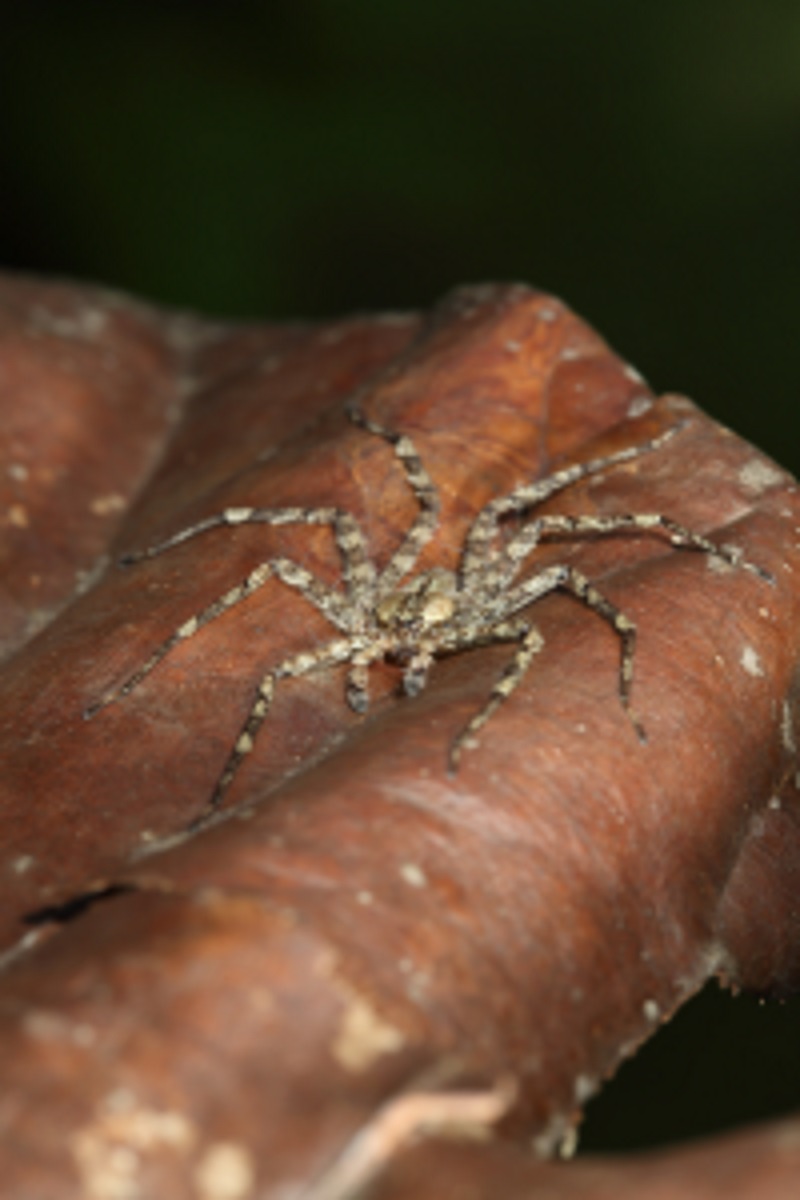 The presence of aerial gliding behaviour in canopy spiders is further evidence (along with gliding ants) of strong selection pressure against landing in the understory. Whereas flying squirrels and other wingless vertebrates use gliding as a mode of transportation from one patch of resources to another, spiders glide to tree trunks to avoid becoming food for predators on the dark, debris-covered or flooded, forest floor.

What’s the best thing about the type of research you do?

The best thing about my research is that I can justifiably spend large amounts of time outdoors observing nature. The fact that I also get to do that in the tropical rainforest canopy is icing on the cake.

This discovery exemplifies how little we know about the behaviours of even relatively common rainforest inhabitants, and underscores the need for further field-based research on organismal biology in tropical forests; certainly many more exciting phenomena await discovery. In a practical sense, understanding the mechanisms of aerodynamic control in these spiders and other arthropods could provide solutions to engineering problems for biomimicry applications and micro-air vehicles.

‘Arachnid aloft: directed aerial descent in neotropical canopy spiders’ is available to read in full. To learn more about Journal of the Royal Society Interface please visit our website.