This year’s Darwin Review, which was published today in Proceedings B, outlines a new conceptual framework for the study of evolutionary biology. I asked the lead author, Professor Kevin Laland from the University of St Andrews to explain the importance of this new framework, and what it means for the field.

Professor of Behavioural and Evolutionary Biology, University of St Andrews

Professor of Behavioural and Evolutionary Biology, University of St Andrews

Can you briefly explain what the current conceptual framework – the modern synthesis – is, and how the field of evolutionary biology has changed since its conception?

The Modern Synthesis (MS) represents a particular way to understand the process of evolution. It primarily focuses on genes: new variation arises through random genetic mutation; inheritance occurs through DNA; and natural selection of genes is the sole cause of adaptation, the process by which organisms become well-suited to their environments. This way of understanding evolution has been highly productive but, like all conceptual frameworks, it shapes what data are collected, and how findings are organized and interpreted.

Following the advent of the MS, the field of evolutionary biology has continued to evolve, allowing incorporation of many new theoretical and empirical findings (eg neutral theory, inclusive fitness theory). As a result, today’s evolutionary theory is vastly more sophisticated than the original synthesis and covers a broader range of phenomena. However, this does not imply that the underlying conceptual framework is optimal and alternative perspectives are of value to the extent that they draw attention to new lines of enquiry or novel hypotheses.

How is the extended evolutionary synthesis different to the modern synthesis? 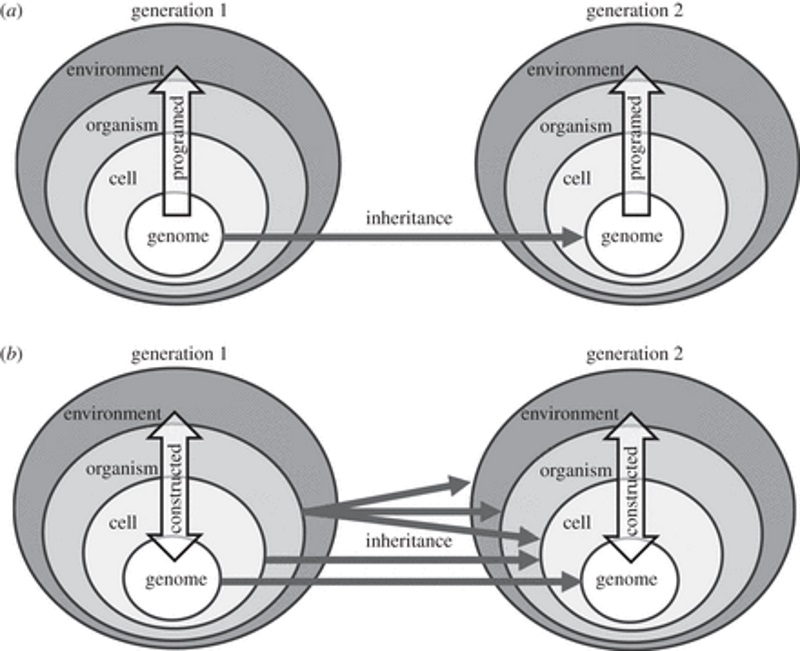 Figure 1 from the paper, showing contrasting views of development

The ‘extended evolutionary synthesis’ (EES) provides another way to think about and understand evolutionary phenomena, complete with its own set of core assumptions, themes, structure and predictions. It does not replace traditional thinking, but rather can be deployed along side it to stimulate research within the field. The EES retains the fundamentals of evolutionary theory – genes and natural selection remain important, for instance – but differs in its emphasis on the role of developmental processes, which share with natural selection responsibility for the direction and rate of evolution, the diversity of life, and the adaptive fit between organisms and their environments. The EES emphasizes that variation is not random, that there is more to inheritance than genes, and that there are multiple routes to the fit between organisms and environments.

Can you provide an empirical example which suggests that a new theoretical framework is required to understand evolutionary questions?

There are many, but of particular interest is the observation that phenotypic variation can be biased by the processes of development, with some forms more probable than others. Developmental bias helps to explain how organisms adapt to their environments and diversify into many different species. For example, cichlid fishes in Lake Malawi are more closely related to other cichlids in Lake Malawi than to those in Lake Tanganyika, but species in both lakes have strikingly similar body shapes. Traditionally evolutionary biologists explain such parallels as convergent evolution: similar environ­mental conditions select for random genetic variation with equivalent results. However, this account requires extraordinary coincidence to explain the multiple parallel forms that evolved independently in each lake. The EES suggests that developmental bias and natural selection work together. Certain morphologies are more readily produced in development than others. Rather than selection being free to traverse across any physical possibility, it is guided along specific routes opened up by the processes of development. However, if that is the case, developmental bias needs to be recognized as a cause of evolution and adaptation.

Where do you think the field will be in another 50-100 years time?

Evolutionary biology already encompasses research in multiple fields, but in the future it will be even more diverse and interdisciplinary. The recognition that developmental processes are playing important roles in evolution will mean that developmental biology will become far more central to the study of evolution. However, many other fields will take on new significance. For instance, the EES recognizes that inheritance results not just from genes but also through the transmission of a wide variety of resources (epigenetic marks, antibodies, hormones, symbionts), through which parents construct developmental environments for their offspring. In addition, extra-genetic inheritance includes socially transmit­ted behaviour in animals, such as nut cracking in chimpanzees or the migratory patterns of reef fishes. Researchers that study such phenomena will all become integral to the study of evolutionary biology. We believe that the EES will integrate evolutionary biology more effectively with ecology, developmental biology and the social sciences.