Voyages to the Azores

Charles Darwin spent four days exploring Terceira before the Beagle moored briefly off São Miguel, where he noted from a distance the ‘neat and pretty’ houses and churches and the patchwork of fields around the town.

It’s that time of year when the Royal Society quietens down a bit, and staff – at least, those with school-age children – take their annual holidays.

My offspring are always wryly amused when I bring aspects of my job on leave with me: following the excellent Robert Hooke Trail in the West Wight, holding forth on John Walsh’s electric ray experiments while visiting La Rochelle Aquarium, and so on (and on). This year we’re going slightly farther afield, for an activity holiday in the Azores, so I thought I’d do some preliminary scouting in the Royal Society’s collections, and share the results with you before presenting my educational lectures to the family audience. Well, I’ve found a few Azores-related items, one picturesque and a couple slightly worrying! 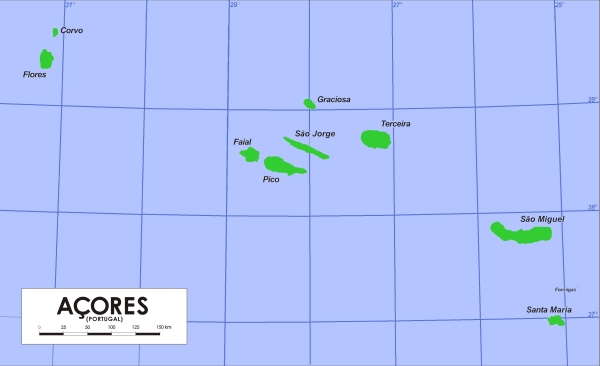 Map of the Azores (Wikimedia Commons)

Our holiday will feature cycling, whale-watching (in the wake of the late Malcolm Clarke FRS), jeep safaris and hiking, all based on the main island, São Miguel. And very pleasant it looks too, judging from this illustration I found in a German travel book from 1860, Die Azoren in ihrer äusseren Erscheinung und nach ihrer geognostischen Natur by geologist Georg Hartung. It depicts the Lagoa do Fogo (lake of fire), a crater formed during a 1563 volcanic eruption and surrounded by steep hills. I have a feeling we might be cycling up a couple of those hills at some stage, but with our current lift replacement works in Carlton House Terrace I’ve been walking up a lot of stairs recently, so I’m hoping I won’t be too unfit.

Hartung’s name crops up several times in the correspondence network of Charles Lyell, J D Hooker and Charles Darwin. Having read the Penguin paperback of Darwin’s Beagle Diary I had vague memories that Darwin visited the Azores on his way home – sure enough, a check back to the source revealed that the Beagle dropped anchor off Terceira, one of the central group of islands, on 20 September 1836. Darwin spent four days exploring Terceira, meeting ‘a number of fine peasantry’ and observing geological features and birdlife, before the Beagle moored briefly off ‘St Michaels’ (São Miguel) while a boat was despatched to collect correspondence. From a distance, Darwin noted the ‘neat and pretty’ houses and churches and the patchwork of fields around the town, before taking ‘thanks to God, a direct course for England’ and the end of his lengthy voyage.

So far so good, but when I turned to our archive catalogue I was reminded again that we’ll be holidaying on top of what is basically a very large volcano, part of a chain which has been active well within Royal Society-recorded history. A meeting of the Society on 24 May 1722 was presented with ‘Observations of a new burning island risen at the Azores’, from Captain John Robeson of the Richard and Elizabeth (CLP/9i/67 – the observation date should actually be January 1721, it’s an Old Style calendar thing). It’s maybe not the most sophisticated piece of artwork you’ve ever seen; nonetheless, it must have been a spectacular sight to the captain and his crew. Robeson recorded the burning island’s length as ‘about two leagues’ (six or seven miles), although other reports gives a more modest figure of 1.5km and note that the island was eroded away by the sea within a couple of years: 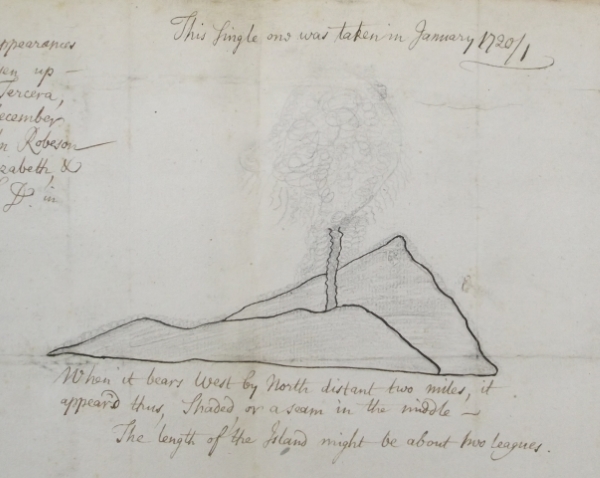 Captain Robeson’s drawing of the ‘burning island risen at the Azores’, 1721 – detail from Royal Society CLP/9i/67

Also read out at the May 1722 meeting was an accompanying letter from Paul Dudley of Roxbury, New England, sent along with ‘a small piece of the Cynders or pumice stone which [Captain Robeson] took up either upon his Deck or in the Sea I forget which’. Dudley had recently been admitted to the Fellowship of the Royal Society, though his precision in reporting scientific observations perhaps leaves something to be desired in this instance…

A little later in the 18th century, there’s a Philosophical Transactions paper which also mentions some seismic events affecting the Azores. Here, the Cornish antiquary and rector William Borlase FRS gives ‘Some account of the extraordinary agitation of the waters in Mounts-Bay, and other places, on the 31st of March 1761’, when a tsunami was set in motion by an earthquake off Lisbon – not as cataclysmic as the Great Lisbon Earthquake six years earlier, but still strong enough to cause large and hazardous waves to surge around the British Isles. Around the Azores, too: in Terceira, ‘the sea rose to a great hight [sic], and fell again so low, that the quays were left dry; all the lighters and fishing-boats, that were hauled up in Portorico, were carried down into the bay, and broke to pieces upon the rocks’.

Well, we’re not visiting Terceira, which is where most of the worrying stuff seems to have happened, so I’m keeping my fingers crossed for a holiday free from lava, tidal waves pummelling fishing (and whale-watching) boats, and other geophysical nasties. The safe haven of the Royal Society Library will remain open during August if you’d like to visit and see any of the documents mentioned above; in the meantime, wish me luck pedalling up those volcanic hills, and happy holidays to you too!