Part of the British contribution to the International Geophysical Year came courtesy of the Royal Society.

We are fast approaching the 60th anniversary of the International Geophysical Year (IGY), which began in July 1957...

We are fast approaching the 60th anniversary of the International Geophysical Year (IGY), which began in July 1957. I am currently attempting to catalogue our collection of photographic material in time for any anniversary-related events, as it offers a fascinating insight into the project.

The International Geophysical Year was a world-wide co-operative study designed to reveal more about the physical aspects of our planet. Part of the British contribution came courtesy of the Royal Society, who set up a research station in Antarctica, a major geophysical observatory known as Halley Bay.

The site was first established in early 1956 by the Advance Party under the leadership of David Dalgliesh and was named to mark the tercentenary of the birth of Edmond Halley, the distinguished astronomer, sea captain and Secretary of the Royal Society. 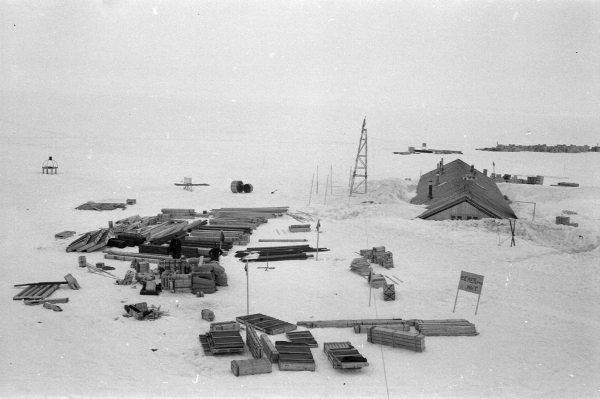 This photograph shows the Halley Bay Research Station just 11 months after the construction of the main hut by the Advance Party. The hut is now completely enveloped by drift snow; efforts to excavate the snow from the entrance were eventually abandoned and a hatch in the roof was used for getting in and out of the building.

The bulk of our photographic collection is by George Hemmen, former Expeditions Officer for the Royal Society, who was originally appointed to the post of Stores Officer by the Falkland Island Dependencies Survey (FIDS) to organise the Halley Bay expedition on behalf of the Society. George has generously allowed us to include his collection of photographs on our Picture Library database. The first few films have been digitised and include the voyage to Antarctica of the ship carrying the main expedition party, the MS Magga Dan, which left Butlers Wharf in London on 15 November 1956. Travelling south via Madeira and South Georgia, the Magga Dan continued through the hummocked sea ice of the Weddell Sea in search of the Antarctic coastline. The image below shows members of the expedition party excavating ice from the side of the ship to release it from the grip of the sea ice. 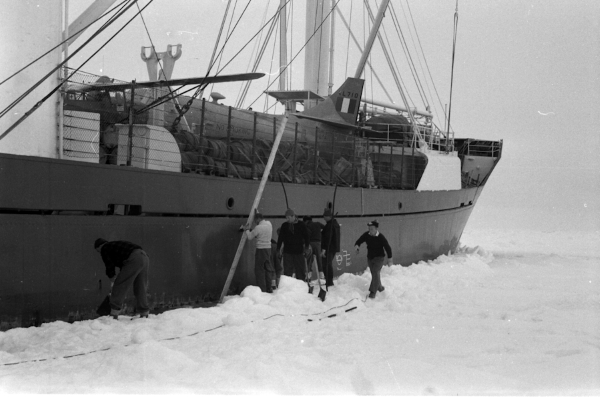 Excavating the MS Magga Dan from the sea ice, 1956 by George Hemmen

The image archive also includes pictures of Shackleton Base, the starting point for the Commonwealth Trans-Antarctic Expedition. Led by Vivian Fuchs (later FRS), this party successfully completed the first overland crossing of Antarctica via the South Pole, a feat that took place at the same time as the IGY. Although not related, certain facilities were shared between the two expeditions: they travelled to Antarctica together on the Magga Dan, and the IGY party helped with the unloading of stores at Shackleton Base. 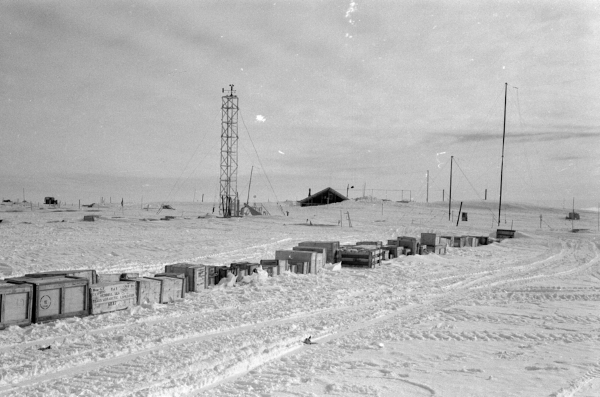 Store dumps and base hut at Shackleton, 1956 by George Hemmen

The research station at Halley Bay has remained – it was handed over to FIDS (now the British Antarctic Survey) at the end of the IGY and has continued to be a station for earth, atmospheric and space weather observation ever since. It is known more simply as Halley these days and the building is in its sixth incarnation, today taking the form of a series of contemporary pods elevated on skis, designed to cope with the movement of the ice shelf towards the sea. The original has long since gone out to sea – it was spotted sticking out of an iceberg by German explorers in the late 1970s!

I am working towards digitising the whole photographic collection and uploading it to our Picture Library website, but if you are interested in the expedition then you are welcome to visit the Library. Notification is advisable so we can ensure the collection is available to view.