The mathematics of sniffing (in crabs)

Previous research published in Interface has been expanded to include an interdisciplinary combination of a computational model and experimental flow data to compare sniffing performance between two species of crabs.

"...marine crabs have an extremely effective strategy for collecting odours. Even though diffusion occurs much slower in water, they were able to capture nearly as many molecules as terrestrial hermit crabs in air!"

Earlier in the year we reported on a paper which identified the differences in odour capture between terrestrial and marine crabs. Now, this work has been expanded to include an interdisciplinary combination of a computational model and experimental flow data to compare sniffing performance between two species of crabs.

Can you tell us a bit about your research interests and how you got involved in this paper?

SK: As an applied mathematician, I focus on trying to develop modelling and computational tools that can be used to test biological hypotheses, including ﬂuid-structure interaction problems. Lindsay and I overlapped as postdocs together at UNC and we were having a conversation about her wanting to understand how well marine and terrestrial crabs would sniff in different environments. We started working on some mathematical modelling ideas, and when she came to UC Merced we were able to ﬁnalize this project and answer these questions resulting in this paper.

LW: Snifﬁng by crabs was a part of my dissertation work at UC Berkeley as a graduate student. I was interested in how aesthetasc arrays responded to all sorts of things, but I was really curious about how these structures evolved, and seeing the big differences between marine and terrestrial arrays I wondered if these differences are adaptations to snifﬁng in air. The ﬁrst step to determine the answer is to see what happens if you stick them in each other’s ﬂuid environments, but this isn’t possible with real animals. I brought this question up with Shilpa one day and she thought we could do it with a model instead.

LM: I am a theoretical biologist and my work focuses on ﬂuid-structure interactions in organisms at scales on the order of hundreds of microns. Lindsay’s dissertation work on crab snifﬁng always fascinated me since these organisms operate at really interesting scales. Also, the ﬂuid physics behind their snifﬁng is related to my own dissertation work that considered air ﬂow between the bristles of tiny insect wings. Lindsay and Shilpa asked me if I would like to get involved in this project, and I said of course with no hesitation!

When did the evolutionary split between marine and terrestrial crabs occur and why? 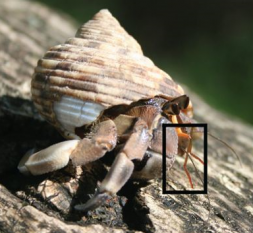 There are a few different lineages of terrestrial crabs, but only one that uses their antennules on land: terrestrial hermit crabs. This family has two genera: shelled hermit crabs in Coenobita (like the ones that you would buy in a pet store) and the robber crab, Birgus latro. The family split away from marine hermit crabs roughly 84-39 million years ago. Why probably involves the idea that there was a pretty strong habitat division between terrestrial and marine hermit crabs, with neither marine crabs being able to spend lots of time on land and terrestrial crabs not being able to spend a lot of time in water, making interbreeding impossible. But no one knows for sure.

How is this paper different to previous work?

My previous Interface paper actually formed part of the base of the current research. Some of the same data that are reported in the previous paper was used to construct our mathematical models. In terms of methods, this was our ﬁrst paper that used mathematical modelling to describe the advection and diffusion of a chemical. In terms of the scientiﬁc question addressed, this is the ﬁrst paper to directly compare not just ﬂuid ﬂow produced by marine and terrestrial crabs but odour-capture performance as well.

We can infer a lot of how these animals use their antennules based on observing the ﬂuid ﬂow, but modelling capture allowed us to not only directly compare each crab, but to put each crab in the other’s habitat to see how each would perform if challenged with a different ﬂuid. It would have been extremely challenging to use physical models alone as there would have been too many parameters when one considers the diffusion of chemicals and their uptake. In this situation, mathematical modelling allowed us to fully explore the effect of each parameter independently.

What do the results tell us about the differences between land and water crabs? 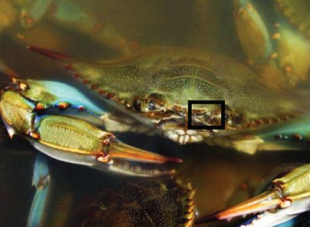 First, marine crabs have an extremely effective strategy for collecting odours. Even though diffusion occurs much slower in water, they were able to capture nearly as many molecules as terrestrial hermit crabs in air! Second, that it is likely that the slow diffusion of odours in water places very heavy physical constraints on marine crabs’ arrays: the morphology needs to have certain features in order to work very well and pick up any odour molecules at all. You can see this when we put the reduced array of the hermit crab in water: it barely captured anything!

Which crab is better at capturing smells – the land crab or the marine crab?

Why is important to understand the snifﬁng behaviour of crabs?

Snifﬁng is one important component of olfaction, which plays a major role in mediating reproduction, ﬁnding food, and avoiding predators. This study is unique because it allows us to test the arrays of the marine and terrestrial crabs in different environments and understand some of the evolutionary forces at play as animals evolve from water to land. From our study, we also gain insight into what may be needed to develop tools to chemically sense in both air and water.

Furthermore, many animals use bristled appendages to sniff, and bristled arrays and their interactions with ﬂuids is a common tool for a variety of tasks, including swimming, ﬂying, swimming, and of course chemical uptake or snifﬁng. Understanding how snifﬁng works in different environments gives us information into how some of these other tools also function.

LW: There is a huge diversity of array designs in both decapods crustaceans (shrimp, crabs, lobsters) which operate primarily in water and insects which operate primarily in air. I would love to use this model to explore how small changes in the array design affects performance, or if there are any combination of features that are critical for arrays to function in air or water.

SK: One clear direction for this project would include developing ways to solve for the ﬂuid ﬂow with computational technologies. This would allow us to easily modify the kinematics (arrangement, size, and shape of the aesthetascs) and test what role this plays on the snifﬁng of marine and terrestrial crabs.

LM: I am interested in uncovering other biological systems that exploit this ﬂow-no ﬂow pattern for snifﬁng but also for other functions such as feeding, swimming, and ﬂying.

This work was published in Journal of the Royal Society Interface ‘A tale of two antennules: the performance of crab odour-capture organs in air and water‘