"...recent discoveries have prompted the need to fully understand the multiple roles of mitochondria in biology..."

What is the function of mitochondria? 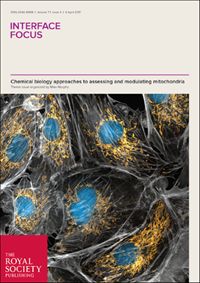 , ATP, respiration, energy and, if you’re lucky, a mention of the Krebs cycle. But the mighty mitochondria have a new role… they are turning up unexpectedly in all areas of biomedical science including ageing, neurodegeneration, cell death, obesity, diabetes, cancer and inflammation. This new job is secondary to their metabolic roles, and instead involves other biochemical processes such as the generation of reactive oxygen species.

These recent discoveries have prompted the need to fully understand the multiple roles of mitochondria in biology, how their dysfunction might lead to disease, and their importance as a potential drug target.

Dr Mike Murphy, based at the MRC Mitochondrial Biology Unit at the University of Cambridge, is at the forefront of mitochondrial research. In September last year he organised a scientific discussion meeting entitled ‘Chemical biology approaches to assessing and modulating mitochondria‘, bringing together biologists, chemists and clinicians to discuss recent developments in the field. Select talks were subsequently published in an issue of Interface Focus as a record of work to date and as a stimulus to future work.

In the video below, we speak to Mike about his research, why he put the meeting together, and how the field might progress in the future.

Each Interface Focus themed issue is devoted to a particular subject at the interface of the physical and life sciences. Formed of high-quality articles, they aim to facilitate cross-disciplinary research across this traditional divide by acting as a forum accessible to all. Topics may be newly emerging areas of research or dynamic aspects of more established fields.