"Stomatopods provide such an exciting group for exploring questions about the relationship between diet and morphology."

Tell us about yourself and your research

I am a Postdoctoral Scholar at Scripps Institution of Oceanography, University of California, San Diego. My research integrates trophic ecology, animal behaviour and biomechanics to understand the fundamental relationship between feeding morphology and feeding ecology. I mostly focus on a group of fascinating crustaceans known as mantis shrimp, or stomatopods.

Stomatopods have an incredible ability to strike at prey with extremely high speeds and accelerations using their raptorial appendages. In fact, some species have raptorial appendages that are capable of producing one of the fastest movements ever reported in the animal kingdom. Competition for prey is thought to contribute to the evolution of these impressive appendages. It is for these reasons that stomatopods provide such an exciting group for exploring questions about the relationship between diet and morphology.

What made you submit to Biology Letters and what was your experience of the process?

I was excited about Biology Letters‘ commitment to publishing articles with clear, succinct findings, and I thought that my project fit well with this journal. My experience with the process was great. The reviewers and editors were very thoughtful, and the publishing editor and publishing team made the process simple.

What does your paper tell us?

I focused on two sympatric stomatopod species from Mo’orea, French Polynesia: a smasher that has hammer-like appendages to produce the impressive speeds and accelerations described previously, and a spearer that has elongated, spear-like appendages. Smashers are thought to consume hard-shelled prey, while spearers are thought to consume soft-bodied prey. Given that these two species share the same coral rubble habitat but have very different appendage types, I hypothesized that they would also have different diets.

I found that both mantis shrimp species have diverse diets that are composed of both hard-shelled and soft-bodied prey. This result is exciting because it counters a longstanding observation that specialized morphology corresponds to a specialist diet, and instead suggests that both of the distinct appendage forms broaden diet breadth. Yet the spearer consumes more soft-bodied prey, indicating that, although smashers strike with greater speeds, small spearers are stronger competitors for soft prey. Thus, a smasher’s ability to access hard prey may have reduced competition for soft prey and conferred an important benefit favouring the evolution of the impressive smashing strike. 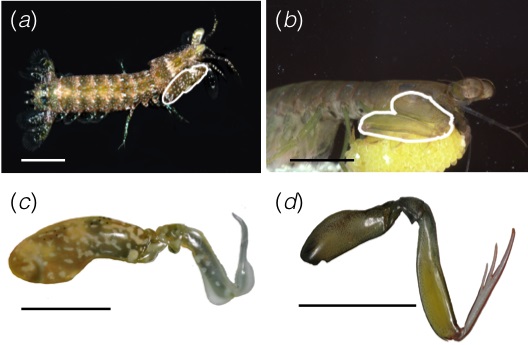 Were there any surprising observations made?

Learning that both species have evolved raptorial appendages that broaden diet breadth was quite unexpected. The fact that both species are really small (20-30mm adults) likely contributed to this result, because at small sizes, spearers and smashers may both be able to capture evasive prey and to produce enough power to break open hard shells, therefore allowing them to include a range of prey in their diets. 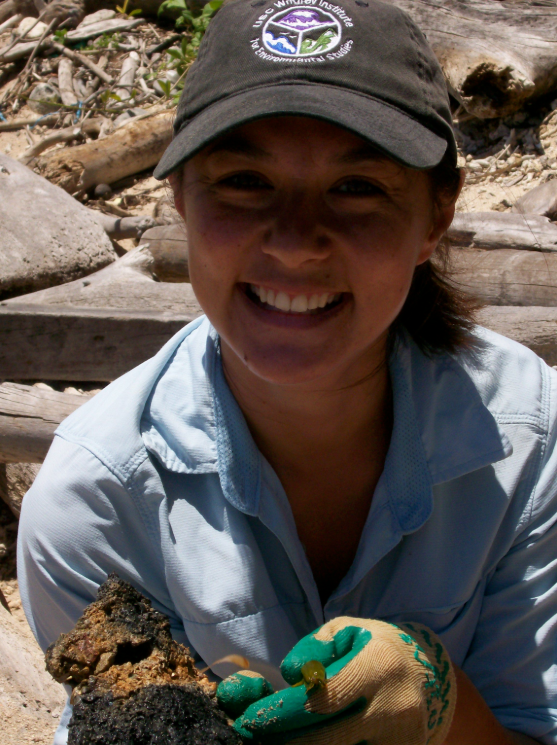 What implications does your research have on the field?

The finding that both spearers and smashers have diverse diets counters the assumption that specialized morphology limits animals to narrow diets. It also shows that these animals, which were thought to have very distinct diets, actually have a considerable amount of diet overlap. This finding lends insight into the role of feeding ecology in the evolution of these distinct appendages.

I want to understand how ontogenetic changes in raptorial appendage morphology and kinematics may alter the kinds of prey that a mantis shrimp can consume. For example, unlike the small spearer studied here, perhaps larger spearers are more limited in their ability to consume hard-shelled prey.

I also think that there is a lot more to learn about the role of competition in shaping diet breadth and raptorial appendage morphology. A future goal of mine is to apply these methods to other mantis shrimp species in order to explore the dynamic interplay between diet, morphology and competition across mantis shrimp, and to begin to understand how these amazing raptorial appendages evolved.