What Goes Around Comes Around

Artwork by Hannah Scott, part of the creative project What Goes Around Comes Around, was inspired by research in Royal Society Open Science on ocean microplastic pollution.

"I wanted to make a piece addressing the idea of Anthropocene, and future geology and plastic core samples. Reading the article brought the piece together and helped me decide upon the aesthetics and staging of the work – thinking about the locations and colours of the microfibers sampled in the paper."

What Goes Around Comes Around is an on-going creative project by artist Hannah Scott which explores ways of visualising and communicating climate change. One of the project artworks – Core – was inspired by the research paper ‘The deep sea is a major sink for microplastic debris’ published in Royal Society Open Science in 2014.

What Goes Around Comes Around explores the relationship between consumer lifestyle in Britain and the Arctic Circle, with a particular focus on the impact of plastic waste. The project aims to challenge audiences to question the impact of their own lifestyle choices; central to this is an exploration of how art can effectively communicate scientific issues without being overly moralistic.

Hannah began the project in 2016 whilst studying on the MA Art and Science course at Central Saint Martins, and her work closely references current scientific research on climate change and plastic pollution. Whilst trying to find out where the location of the largest plastic accumulation on the sea floor, Hannah discovered the article ‘The deep sea is a major sink for microplastic debris’ at the top of her Google search.

The paper examines the presence of microplastic fibres (anything smaller than 1mm) in deep-sea sediment from the Atlantic Ocean, Mediterranean Sea and Indian Ocean, showing that their abundance is up to four magnitudes greater than that previously found in contaminated surface waters. Commenting on the paper, Hannah said:

“For me, what was most interesting and important about the paper is the fact that vast amounts of plastic are accumulating in places that are mostly out of sight and so easily forgotten. The source of microplastics is also really interesting and not widely appreciated, for example washing clothes, cigarette butts, city dust, car tries, road markings, etc. Core was inspired directly by this paper.” 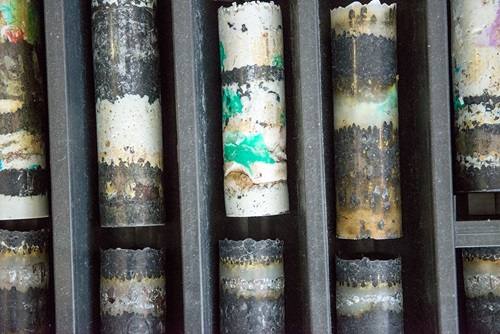 The plastic casts are made from recycled polyethylene and polypropylene, heated in metal moulds. Each batch took about 8 hours to fire, gradually and deliberately building up layer by layer to resemble geological core samples.

Describing the artwork, Hannah said: “I wanted to make a piece addressing the idea of Anthropocene, and future geology and plastic core samples. Reading the article brought the piece together and helped me decide upon the aesthetics and staging of the work – thinking about the locations and colours of the microfibers sampled in the paper.”

Other artworks from What Goes Around Comes Around include Strata and Slice.

For this project, Hannah has been shortlisted for the MullenLowe NOVA Awards 2017 which recognises the work of students selected from the degree shows at Central Saint Martins. From 1,300 graduating students, five awards will be presented to students whose work represents original creative thinking and execution, with an emphasis on craft, skill and exceptional accomplishment. The public can also vote for their favourite work until 4th July.

What Goes Around Comes Around continues later this year with a trip to the Arctic Circle, where Hannah will be visiting on an artist and scientist led residency to consider the impact of changes to the Arctic environment on Britain. During the residency Hannah will sample the atmosphere and land for microplastics, contributing directly towards current research led by Dr Stephanie Wright, research fellow at Kings College London, on the impacts of microplastics on the environment and human health.