A recent issue of Interface Focus examined the idea of convergent minds, which pertains to how distantly related species can think about problem solving in very similar ways. We spoke to the authors of one of the papers from the issue that investigates counting ability in spiders.

"We could never have anticipated that spider cognition would one day become our obsession, but we have learned over the years that spiders are full of surprises."

A recent issue of Interface Focus examined the idea of convergent minds, which pertains to how distantly related species can think about problem solving in very similar ways. The special issue is a multi-disciplinary investigation into the evolution of cognition and its various forms. One of the papers, a research article called ‘Representation of different exact numbers of prey by a spider-eating predator’ shows that spiders can differentiate between one, two and many. We spoke to authors Fiona Cross and Robert Jackson to find out more.

What species of spider are you working with here? 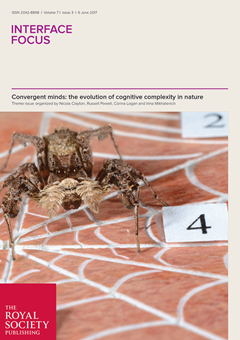 Portia africana, the salticid (jumping) spider we used in these experiments, targets other spiders as preferred prey, but this is a dangerous way for Portia to make a living. Another spider is another predator and Portia’s task is to get something to eat without being eaten in the process.

Portia belongs to the spider family Salticidae, known for remarkably good eyesight, but Portia leads the pack when it comes to having intricate vision-guided behaviour. For example, Portia excels at seeing its dangerous prey in the distance and then, by executing a pre-planned detour, arrives at an optimal location from which to attack the other spider. However, the task is often more complicated than this because Portia often confronts more than one prey spider at the same time.

How exactly are spiders capable of distinguishing between one, two and many?

In our experiments, we let Portia see a specific number of prey spiders in the range of 1–6, but the experimental apparatus was designed in such a way that Portia could access these spiders only by walking along a detour path that involved losing sight of the prey, and the detour route could be initiated only by first walking directly away from the prey. An important feature of these experiments is that they were based on using expectancy-violation methods. These methods are unconventional in studies on spiders and other arthropods, but they are often used in studies on the numerical aptitudes of primates, including human infants. 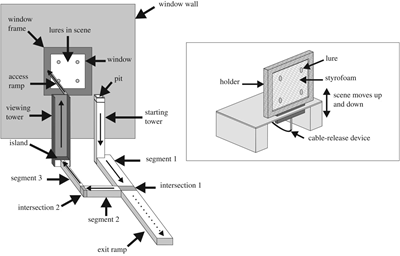 There was no evidence of expectancy violation when the number changed between 3 vs. 4 or 3 vs. 6 prey spiders, but there was consistent evidence of expectancy violation for every other change in number. This was the case regardless of whether the larger number was seen first or second, and regardless of prey size and orientation. The results of this study can be characterised as P. africana counting 1, 2, and many, which is similar to what has been observed with human infants.

Have you always worked with spiders?

One of us had decided early on that almost nothing could be more fascinating than a spider, whereas the other began with the conventional fear-and-loathing attitude toward them. Over time, our interests converged, and yet we both started out assuming that spiders were mindless. We could never have anticipated that spider cognition would one day become our obsession, but we have learned over the years that spiders are full of surprises.

How does this work relate to humans? Why is it important?

Like Portia, human infants show evidence of expectancy violation when they observe a change in number and, like Portia, human infants can be said to count 1, 2 and many. There has also been a lot of interest in using a wide range of different animals to investigate numerical cognition. Attending specifically to number has often be envisaged as beyond the capacity of animals with small brains, but Porta’s performance in our experiments illustrates the need for more research aimed at understanding how widely numerical capacities are expressed in the animal kingdom.

Are there other aspects of a spiders’ cognition you can test?

There are many questions that remain unanswered about expectancy violation by spiders and how spiders make plans, and research on the numerical capacities of spiders is still in an early phase. Next on our own agenda is to determine whether Portia pays attention to the number of more than one category of objects at the same time. This is relevant to Portia because conspecific rivals are often searching for prey in the same neighbourhood, suggesting that it would be advantageous for Portia to pay attention to the number of rivals as well as the number of prey. We want to know whether, with a brain that could sit comfortably on a pin head, Portia can manage these two numerical tasks simultaneously.

You provided the cover photo for the special issue – can you tell us a bit more about it? Did the spider behave itself?

This photo was taken in Kenya last year, using a Portia female from our laboratory. A few years ago, Fiona had the good fortune of finding a locally-made coaster with a spiderweb pattern – the perfect backdrop for her photo. For a size comparison, the numbers in the photo were in 12 point font. Fortunately, although Portia is a small subject to photograph, these spiders are known to move slowly. This particular individual was the perfect model for Fiona’s photography.

Emeritus Professor Robert Jackson and Dr Fiona Cross have both worked in the School of Biological Sciences at the University of Canterbury in Christchurch, New Zealand, and they both have contracts as Visiting Scientists at the International Centre for Insect Physiology and Ecology in Mbita, Kenya. Although Robert’s background is that of a zoologist, Fiona’s background was initially in psychology, especially cognitive psychology, before she began working in the School of Biological Sciences to study spiders.