A discussion of the history and benefits of transparency in peer review.

Transparency is important in helping journals focus on the quality and rigour of the research process rather than its likely impact, originality and even fashion. A vital part of this opening up of peer review is recognising the value of such work as an essential ‘output’ in assessments for grants and tenure.

In 1832, the Royal Society moved from using committee minutes to written peer review reports for determining what was published in Philosophical Transactions. This was conveyed by Frederick Augustus, The Duke of Sussex in his Presidential address of November that year.

The reports were written by members of Council and were often made public. They were ‘often more valuable than the original communications upon which they are founded’.

The reporting was collaborative and referees were expected to reach a consensus. This was time consuming and could be problematic, especially when referees disagreed. It was therefore abandoned after 1832, and both reports and the names of reviewers were kept confidential.

It wasn’t until the dawn of the 21st century that publishers (such as BMC, BMJ and PLoS) started to seriously experiment with open peer review.

Transparency is back in vogue

Why is this? The first reason is the politicisation of science. A good example is climate change — when scientists from the University of East Anglia were bombarded with freedom of information requests by climate sceptics, it became clear there was a lack of transparency and this was used to undermine the veracity of the research. Policy based on published research is under increased scrutiny.

The second reason stems from the open science and open access agenda. Much research is funded by the public purse and it is argued that the published output from this research should be available to all. It follows that the evidence — data, peer review — on which claims are made should be made open too.

Finally, transparency has the potential to improve the quality of research and reduce research misconduct. Traditional peer review is confidential, with research papers scrutinised by a small number of anonymous experts. Although publishers are vigilant, this secrecy provides the opportunity for fraud.

In 2014, the Royal Society launched the journal Royal Society Open Science which offers optional open peer review where reports are published along with articles. This has proved popular with the majority of authors opting for publication of peer review reports and half of reviewers signing their reports. The uptake varies by scientific discipline. 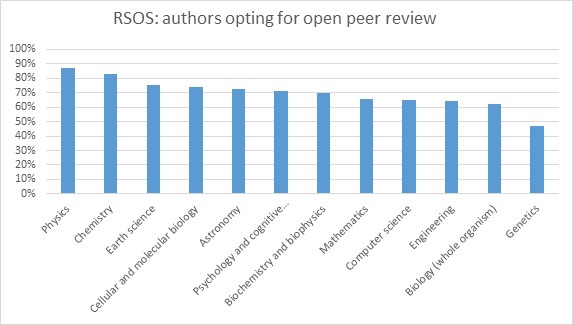 Since then, open peer review has been introduced on two further Royal Society journals, Proceedings A and Open Biology.

Benefits of transparency in peer review

There are several benefits to open peer review.

Overall, the whole peer review process gains more trust and accountability when everything is transparent.

Back in 1832, science wasn’t ready for transparency – producing detailed written reports for public judgement on the value of a paper was just too much work for the small number of referees, and publicly criticising peers was socially very difficult.

Today, because science is funded largely by the public purse and informs so much public policy, transparency is essential. In recent decades many believe that impact and citations have played far too prominent a role in determining what is published. Transparency is important in helping journals focus on the quality and rigour of the research process rather than its likely impact, originality and even fashion. A vital part of this opening up of peer review is recognising the value of such work as an essential ‘output’ in assessments for grants and tenure. There is cause for optimism that the abandonment of open peer review in 1832 will not be repeated.