Research priorities at the interface of the environment and human health

A two day residential meeting brought together researchers and policy professionals from across the environment and health sciences to discuss topics at the nexus between environmental change, natural resources and human health.

On 16 and 17 October UK Future Earth and the Royal Society’s Global Environment Research Committee (GERC) hosted a meeting at The Kavli Royal Society International Conference Centre at Chicheley Hall in Buckinghamshire. The two day residential meeting brought together researchers and policy professionals from across the environment and health sciences to discuss topics at the nexus between environmental change, natural resources and human health. The aim was to identify interdisciplinary research priorities relating to natural resources and human health in the context of both the Sustainable Development Goals and land use priorities in the UK post-Brexit.

The atmosphere of co-operation and co-creation between the environment and health experts throughout the two days was fantastic. We gained some fascinating perspectives on longstanding issues as well as new insights into some less well explored and yet potentially important interdisciplinary areas. The full meeting report is now available.

Here I summarise some of the most interesting discussions and cross-disciplinary research priorities:

People on the move

An unstable environment can have severe health implications. Displaced populations often live in multilingual temporary communities, and when combined with malnutrition this environment can act to exacerbate existing health problems, especially in children. Malnutrition makes children more susceptible to diseases and a cycle of recurring sickness. It can also have a potentially devastating impact on their cognitive behaviour. Protein malnutrition and constant childhood illness can cause brain shrinkage and affect cognitive development. This and the stress of displacement can result in mental health problems affecting future prospects.

Biodiversity has a complex relationship with human health and many of our breakout groups discussed the need for further research in this area. Discussion points included:

Meat consumption is a leading contributor to climate change, while obesity is one of the world’s biggest health challenges. The global consumption of meat is forecast to increase by over 75% as wealth grows and tastes change globally. Research is required into the cultural, economic and behavioural drivers of diet choice and behavioural change, as well as into the development of alternative protein sources.

Green and blue space is known to have positive effects on both physical and mental health – but how can these benefits be accessed more widely in an urbanising world? Access to nature for those living in cities is becoming a pressing issue in many societies and regions. Urban green space can have the same positive mental and physical health benefits but research is also required into the features of green space that brings greatest benefits and encourage its use.

How to attract young people into farming?

The average age of a farmer in the UK is 58 and young people are leaving the land the world over. The future sustainability of farming everywhere depends on raising its attractiveness for younger people. Advances in technology and precision agriculture will change agricultural livelihoods and will require farmers of the future to have different skills. Evidence-based connections between health and nutrition are likely to lie at the heart of this more attractive, higher value, high technology future farming.

The use of futures techniques to explore environment and health issues was advocated. In particular, the youth perspective – considering the world through the eyes of the next generation – was felt to be a good starting point (see image).

The Royal Society has been exploring the use of futures techniques to supplement its own policy work. Earlier this year our New Horizons team worked with schoolchildren to imagine future scenarios with the aid of objects in a time capsule. 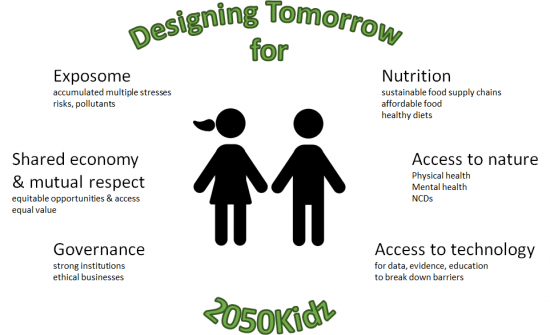 Thoughts from event attendees on the ‘youth perspective’ to inform research priorities in environment and health.

Underpinning all of these discussions is how we usefully translate this interdisciplinary research for use in policymaking and practice. Evidence synthesis has a vital role in this. Policymakers and practitioners often require rapid summaries of evidence to inform decision making. There is a value in both building up an evidence base on relevant topics, such as the interactions between environment and health, as well as developing new rapid mixed-method research methodologies to generate evidence quickly.

The Royal Society is currently running a programme of work on evidence synthesis in collaboration with the Academy of Medical Sciences. This aims to describe a set of principles for good evidence synthesis to inform policymaking. These will be published in early 2018.