After receiving an enquiry about the papers of physicists Hans von Halban and Lew Kowarski, Virginia Mills finds some documents with great significance to the history of nuclear science, and catalogues them as her first project as Royal Society Archivist.

Halban and Kowarski's papers were deposited with the Royal Society in 1941 on the understanding that they be sealed ‘until conditions allow’. The papers contained highly secret information on the components needed to make a nuclear reactor and how to create plutonium from uranium.

Back in January I started the new year with a new job. Since then, I have had the great privilege of getting to know the Royal Society’s collections as Archivist for the Early Collections. I’m the latest in a long line of custodians to all the institutional records from the founding of the Society in 1660 up to 1900, as well as looking after manuscripts by and about Fellows of the Society. Along with taking on some less common archivist’s duties (such as clock winding and bell ringing – don’t ask), I’m trying to cram over 350 years of institutional history into my head and remember which archive records it can be found in. 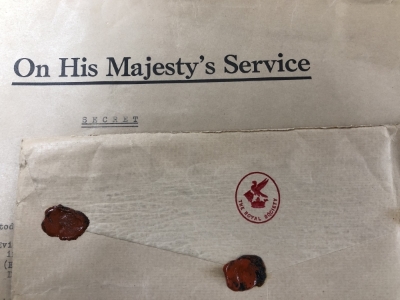 The general manuscripts collection in the Royal Society archive alone contains nearly 10,000 sets of records and papers, ranging from single volumes to series of correspondence containing hundreds of letters. The subject coverage is just as broad, showing the evolution of scientific understanding and study over the centuries of the Society’s existence, from schools of thought which we now consider outside the realm of science such as astrology and alchemy, to the earliest scientific papers on nuclear chain reactions. 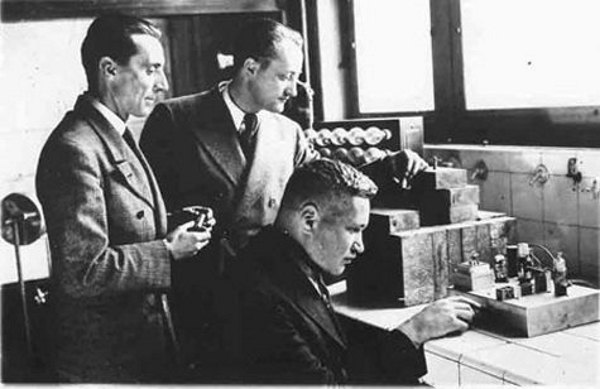 As someone new to this role, every enquiry sent in from a researcher or Fellow is an opportunity for me to discover more about the amazing historical collections of the Society. After receiving an enquiry from Norway about the papers of nuclear physicists Hans von Halban and Lew Kowarski, I was intrigued to find that there are documents here with incredible significance to nuclear science. The circumstances in which they came to be in the Royal Society archive are rather unusual too, and therefore I decided to catalogue these manuscripts as my first mini-project as Archivist. 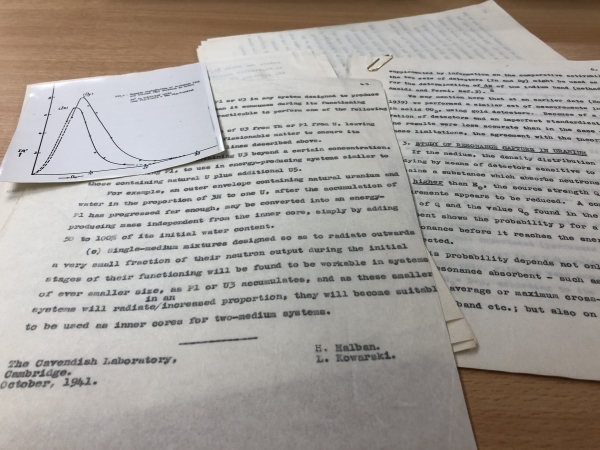 Cataloguing and improving access to collections is part of my job, but it’s also sometimes an archivist’s remit to keep information confidential when required, for example to protect personal data. In the case of Halban and Kowarski, the papers were deposited with the Royal Society on the understanding that they be sealed ‘until conditions allow’ them to be published. The year was 1941 and the ‘condition’ that made it imprudent to publish the papers was the Second World War. The papers contained highly secret information on the components needed to make a nuclear reactor and how to create plutonium from uranium. 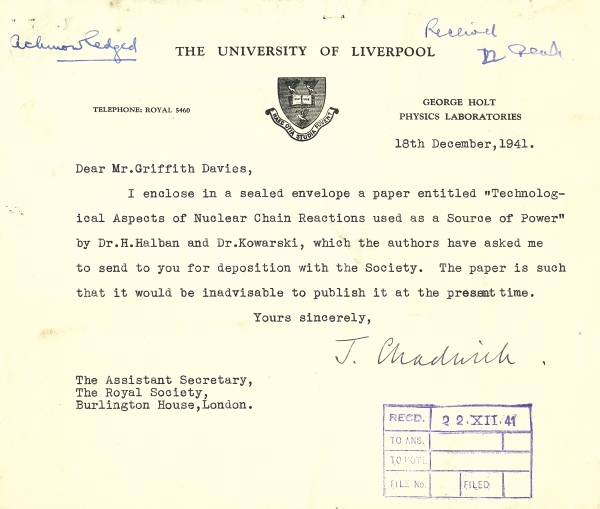 Letter in which Sir James Chadwick FRS, discoverer of the neutron, asks the Royal Society to act as custodians of one of Halban and Kowarski’s papers as it would be ‘inadvisable’ to publish. Royal Society Archive MS/850/2/7

During the early years of the war, Hitler’s Germany was investing considerable resources into nuclear research under the auspices of the ‘Uranium Club’, with the aim of weaponising the splitting of the atom (fission). They were not alone – in Paris, a team led by Frédéric Joliot-Curie was attacking similar nuclear problems. Hans von Halban and Lew Kowarski belonged to this group, and their scientific papers show their interest in moderators to the fission process – substances that might enable sustained nuclear chain reactions. They concluded that both heavy water and graphite had the necessary properties. When the French secretly procured the only existing stockpile of heavy water (from the Norsk Hydro factory in Norway), it became clear that the Germans were also interested and consequently may already have been researching an atomic bomb. 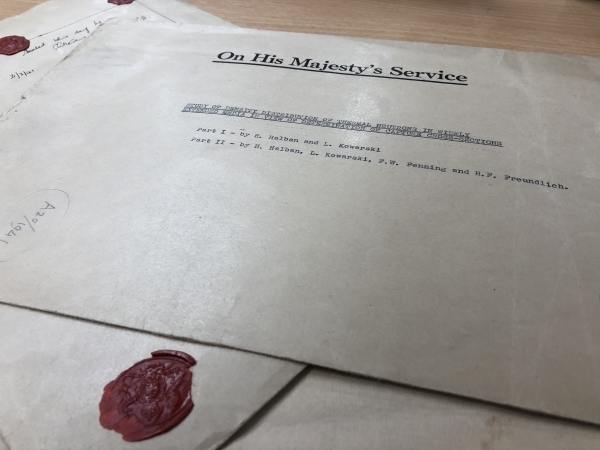 We can’t know what the consequences might have been if Halban and Kowarski’s findings had been lost. The German Uranium Club programme concluded by 1942 that nuclear fission was a technology unlikely to have significant impact on winning the war and directed their resources elsewhere. Our two scientists, having escaped occupied France bearing their papers, drums of heavy water and radium, continued their nuclear research with colleagues at Cambridge’s Cavendish Laboratory. They became part of the ‘Tube Alloys Project’, the unprepossessing code name for British clandestine wartime research into nuclear weapons. Later, they would liaise with the better-known Manhattan Project, the consequences of which were earth-shattering.

Meanwhile, Halban and Kowarski’s papers slumbered in the Royal Society Archive, kept in wax-sealed envelopes and locked away. Finally, they were opened on 31 May 2007 when physicist Brian Cox broke the seals to mark the 75th anniversary of James Chadwick’s discovery of the neutron. From Chadwick’s landmark discovery in 1932 to the first test detonation of an atomic bomb by the Manhattan Project in 1945 took just 13 years, surely one of the swiftest ever evolutions of a scientific discovery.