There, in the Lofoten archipelago, is that terror of tidal rips, the legendary maelstrom, feared by antique seafarers and by small children (like me) with story-reading habits.

Here is an unexpected discovery, made in a roundabout way. I’d noticed recently that our picture database is a little short on images of early maps and so I decided it was time to add a few interesting specimens. A famous piece of cartography by Edmond Halley appears in Edward Barlow’s book An exact survey of the tide (1717) so that seemed like a good place to start.

Apart from Captain Halley’s pioneering piece of oceanography – a version of his trade wind map of 1686, originally presented at the Royal Society – the remaining charts in Barlow’s volume were only vaguely interesting. Until the book’s final plate, that is. Look closely at his sketch of the Norwegian coast and you’ll be drawn to a small swirl of inky blackness. There, in the Lofoten archipelago, is that terror of tidal rips, the legendary maelstrom, feared by antique seafarers and by small children (like me) with story-reading habits. 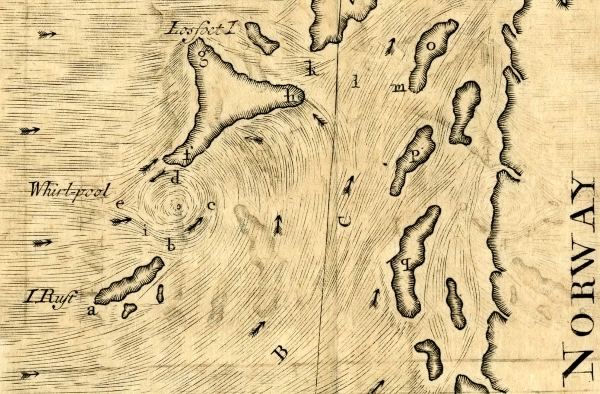 Detail of the maelstrom, after Herman Moll, 1717

The vortex features in the great Edgar Allan Poe tale from 1841 A descent into the maelstrom, rightly famous for its collision of the nightmarishly sublime in nature and the scientifically rational. The narrator, a fisherman, becomes suspended upon the moonlit slopes of the void – his watch fails (which would have scandalised the clockmaker, Edward Barlow) but he manages to reason his way to salvation, by observing how a variety of floating objects behave in that gigantic eddy. Launching himself from his doomed ship attached to a cask, he regains enough time to outlast the whirlpool as the tides change and it subsides.

The story is often characterised as an early piece of science fiction and Poe knew the detail of his historical and scientific sources well enough to make the fantastic very plausible. Barlow’s plan is a detail from a larger map of Europe by Herman Moll (1654?-1732) and his text notes, for example, that the maelstrom confused fishes by churning them from the depths and that must have inspired the American’s fictional protagonist. It is, wrote Barlow ‘the Navel of the Sea; which Whirlpool is, in all Probability, occasion’d by some mighty subterraneous Hiatus, and proves fatal to Ships that approach too nigh…upwards of two Leagues round…’

Now as all of you readers will know, Poe’s prematurely white-haired fisherman wasn’t the only character to escape the whirlpool. The naturalist Professor Aronnax and his companions also survived the horrors of the maelstrom, just as Captain Nemo’s Nautilus was swallowed up by it at the climax of Twenty thousand leagues under the sea (1869). Jules Verne’s maelstrom is more matter-of-a-fact and less vertiginous. Verne (1828-1905), although a great admirer of Poe, liked to get his science right, where he could.

One of the earliest surviving accounts of the maelstrom was written by another Nemo-like exile from his homeland, the Swedish Catholic priest Olaus Magnus (1490-1557). In Rome, Magnus produced a marvelous map of Scandinavia and also the great account of his homeland and its people, the Historia de gentibus septentrionalibus (1555). Since we have this in the Society’s Library, I thought I’d take a look at it. Sure enough, there was a woodcut illustration of the maelstrom: and with it many of the sea monsters that would have delighted Jules Verne. Curious to think of how antiquarian books retained such power over the imaginations of so many later writers. 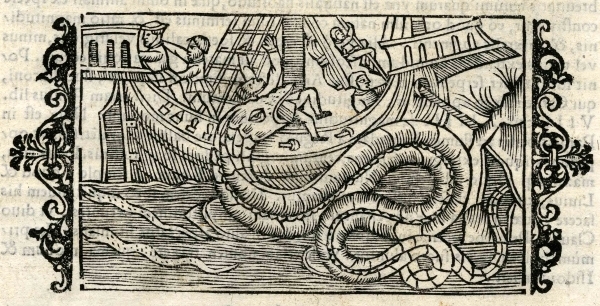 Stricken ships in the whirlpool (above), and a sea serpent (below), from Olaus Magnus, 1555