A recent paper in Philosophical Transactions B looking at the impact of the ‘open’ workspace on human collaboration has achieved our highest Altmetric score to date in a very short time.

The study by Ethan Bernstein at Harvard Business School and Stephen Turban from Harvard University used new technology to track behaviour in an office before and after the space was made more ‘open’.

A recent paper in Philosophical Transactions B looking at the impact of the ‘open’ workspace on human collaboration has achieved our highest Altmetric score to date in a very short time. Here we look at the background to this paper and ask what we learn from this.

The study by Ethan Bernstein at Harvard Business School and Stephen Turban from Harvard University used new technology to track behaviour in an office before and after the space was made more ‘open’. They found that, following the change, the volume of face-to-face interaction decreased significantly (~70%), with an associated increase in electronic interaction. Rather than prompting increasingly vibrant face-to-face collaboration as intended, a transition to open architecture appeared to trigger a natural human response to socially withdraw from officemates and interact electronically instead.

Altmetric is way of seeing how content is being talked about online – for example in places such as news articles, Twitter, Facebook and blogs, rather than in the traditional academic literature. Content is given an ‘Attention Score’ based on these online mentions. An article’s page in the Altmetric database provides details about when and where these mentions appear, and even demographics of who’s talking about the article.

The paper’s current score is close to 3700, and we expect this to continue increasing. It is currently number 102 out of all papers on Altmetric (over 11.5 MILLION papers). It has been tweeted by over 7500 people from every continent on Earth, and appeared in 76 news articles. We think that is pretty incredible! 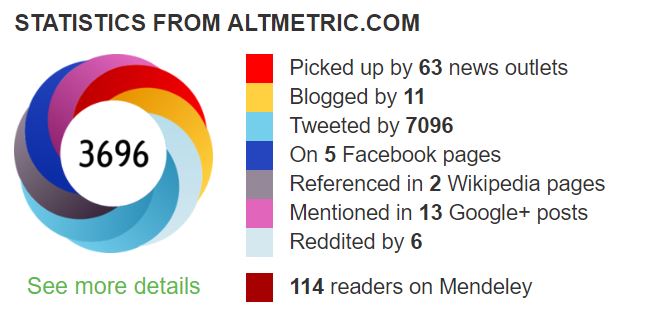 Why has it been so popular?

There are a few reasons why this paper in particular has done so well. As might be expected, papers with high Altmetric scores tend to be those that grab the attention of both the media and the general public. This paper did just that, as it reported on an aspect of many peoples’ lives that they feel strongly about: their working environment. This study provided some scientific evidence for a common complaint!

The experiment itself was novel and creative, and used clever technology. This helped to attract the public’s interest, and also that of more technology-focused journalists and media outlets, helping to drive attention.

Both of these factors make it an appealing story for journalists to cover. The paper’s clear overall message is easy to summarise in a few words, so lent itself well to social media.

What did the authors do to help?

The authors did a few key things that likely helped to make their paper more successful:

What can other authors learn from this?

Firstly, don’t expect to be able to achieve these results easily! Realistically, the vast majority of scientific papers don’t have the ability to attract readers in this way. However there are a few easy ways to make your paper more shareable:

Congratulations again to Ethan Bernstein and Stephen Turban on their fantastic work!

This article is part of a theme issue on interdisciplinary approaches for uncovering the impacts of architecture on collective behaviour. To browse all issues published in Philosophical Transactions B please visit the journal website.