Exploring science in the making

Read more about Sarah Eames' special visit to the Society to see some of the archives in return for providing some feedback on a new online resource called Science in the making.

'I love teaching science, encouraging children to ask questions; trying to answer them, helping children wonder about the world around them, education really doesn’t stop.'

I love teaching science, encouraging children to ask questions; trying to answer them, helping children wonder about the world around them, education really doesn’t stop.

So during the school spring half term holiday I went on a continuing professional development (CPD) event to the Royal Society on evidence informed education.

I was delighted to then be invited for a special visit to the Society to see some of the archives in return for providing some feedback on a new online resource called Science in the making. Who better to share my experience with but a few fellows from the Primary Science Teaching Trust (PSTT)?

Just getting to the London building was exciting as we walked up the Mall and then through the glass doors with DNA handles. The Royal Society was formed back in the 1660s after a lecture by Christopher Wren (yes, the architect of St Paul’s Cathedral ,after the Great Fire of London , but did you know he was also an astronomer, mathematician, physicist and anatomist?). 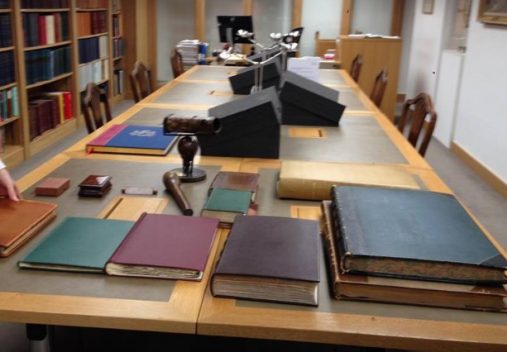 Some of the historic books the teachers were able to view from the Royal Society archives.

Anyway, we followed Jo Cox (Education Outreach manager) under the ceiling that featured a metal spiral of influential signatures, down the steps into the archives; an amazing room filled with books, ancient, old, and new; tiny handwritten ones, large with coloured drawings and the obscure. 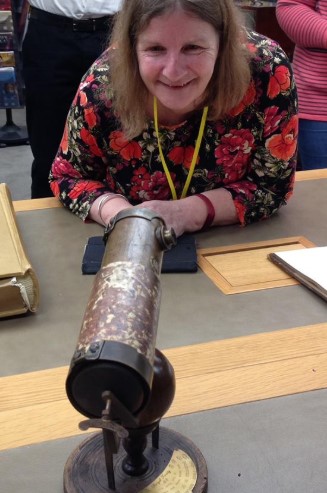 Sarah with the first reflective telescope.

We all started off at a polite distance from Rupert Baker (Library manager) at the curator’s table, but gradually we all edged closer to peer, stroke, touch and wonder about the items on the table. The talk was so interesting that another visitor in the room kept coming over to find out more. We learnt about the wax death mask of Isaac Newton, the Victorian book which catalogued creatures that have since become extinct and the first reflective telescope. Drawings of where Earth was the centre of the universe showed how ideas have changed and even looking at the evolution of the paper in books was fascinating. We also saw signatures from royalty and ‘the great and good’ of the science world in the Royal Society Fellows book – and yes, there were an increasing numbers of female signatures.

We really didn’t want to leave the archive room, but we had already taken up more time than had been planned. Next, we went up the magnificent winding stairs to find out about how the archives had been put onto the Royal Society website.

The Science in the making website is a really good starting point for looking at the archives and finding interesting and historical resources to share in lessons. As I have just trained with STEM Learning to be a Polar Ambassador I was immediately drawn to Captain Scott’s Antarctic expedition between 1901 and 1904. The interactive map is fascinating as it shows photos that are over 100 years old, accompanied by typed and handwritten documents.

As a teacher it would be completely possible to get children to navigate their own way through the map or select one or two interesting photos /articles to look at. It is certainly possible to do a ‘zoom out’ activity (where you zoom into and image, show the students and see if they can guess what it is. If they don’t get it right, slowly zoom out in increments until they see the whole image) with the photos as they have been scanned in such detail.

Another section ‘A scientific history of colours’ looks at light. Letters written by Isaac Newton are numerous with little sketches and may make primary teachers think about how science can be recorded in their classrooms. Be warned, it is too easy to get absorbed in the archives and suddenly you find time just drifts away from you as you read what is written and look at just one more photograph...