Getting stuck into science at the Edinburgh International Book Festival

From my perspective I wanted to see how these activities were received in relation to the books and whether or not we could then roll these activities out to schools who are participating in the judging of the Young People’s Book Prize. 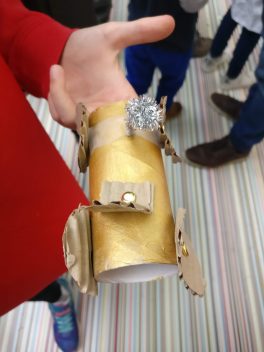 A brilliant Mars rover constructed by one of our budding engineers. Equipped with a robotic hand and camera, it is ready to be sent straight to Mars.

The day was a lot of fun with children of all ages visiting the Baillie Gifford Story Box. As well as the activities, children were encouraged to cast their votes for their favourite books and also take time to sit and peruse the books at their leisure in the reading corner.

By sharing these activities it is hoped that we can further promote the links between science and literacy and get those children who are passionate about reading to extend their own learnings by experimenting based on ideas they have discovered in these wonderful books – a great way to create links between activities in the school library and the science classroom.

The shortlisted books and the activities are listed here:

Curiosity: The story of a Mars Rover by Markus Motum
Related to this book, children were encouraged to design their own Mars Rover, considering engineering principles about design and functionality – our own version of a scrap-heap challenge

Lonely Planet’s Dinosaur Atlas by Anne Rooney, illustrated by James Gilleard
In this workshop children created their own fossils, using Plaster of Paris, a disposable cup and a few original dinosaur fossils (models of which can be purchased online) – lots of excited chatter about relative size, structure and function of teeth related to diet – who doesn’t love a dinosaur activity!

Scientist Academy by Steve Martin, illustrated by Essi Kimpimäki
In this workshop, children were encouraged to think about what it means to be a scientist – what they look like, what they do. Some simple props and a photo booth made for all manner of discussions amongst the parents too. I loved the response by one particular 8 year old who told me that all she needs to do is to look in a mirror to see a scientist!

Perhaps one of the most discussed books was the Women in Science by Rachel Ignotofsky which discusses ‘50 fearless pioneers who changed the world’. Children were encouraged to think about what scientists look like, create their own scientist and display them as part of our ‘science is for everyone’ display.

My own activity was the O-Rings lab supporting the book Exploring Space by Martin Jenkins, illustrated by Stephen Biesty. The extraordinary story of space exploration, from Galileo’s telescope to the launch of the International Space Station – and beyond! Martin Jenkins’ accessible and wide-ranging narrative covers early astronomy, the history of flight, the Space Race, the day-to-day of astronauts in the International Space Station and the possibility of extra-terrestrial life, and considers where future missions might take us.

With the O-Ring activity children could delve into some of the fascinating science behind how rockets fly as they created and experimented with their very own O-ring rockets. Children were encouraged to experiment using different sized rings, different materials, different shapes and it quickly became apparent that there was no end to their suggestions ‘What if I launch it with the large ring first?’ ‘What if have both rings the same size?’ ‘What if I use a shorter straw?’ etc.

So, over to you teachers, librarians and club leaders – what experiments can your panellists carry out?

The education team at the Royal Society would love to hear about other experiments and activities that you have carried out relating to the 2018 shortlisted books, or perhaps schools could send us a write up about their own successes using these suggestions.

If you’ve never taken part in the Young Persons Book Prize, why not read the information here about getting involved next year?

The 2018 winner will be announced in November.