Read more about this project funded by a Royal Society Partnership Grant.

'Everyone involved is thrilled to have had our Royal Society Partnership Grant proposal funded so that we can run this project...'

Everyone involved is thrilled to have had our Royal Society Partnership Grant proposal funded so that we can run this project, with collaboration between secondary and primary schools in Abingdon, Science Oxford and our research partner, Tanesha Allen at Oxford University’s Wildlife Conservation Research Unit.

Tanesha and I first met at ‘Greenlight for Girls’, an event at Oxford University encouraging more girls to take up STEM subjects, where she and I ran a workshop together on science writing. A few months later, we met up again to discuss ways in which Tanesha could do more outreach work with schools and a Partnership Grant seemed like a possibility.

The more we discussed it, the more obvious it became that we had a really good opportunity for a great project with genuine collaboration between schools and a field biologist and even an aim to contribute to Tanesha’s own D.Phil. research.

The basic idea is to purchase a set of wildlife camera traps, exactly like those used by Tanesha, and to train secondary school pupil mentors to use these. After some experimentation at their own schools, the secondary pupils will then lead teams of primary pupils in carrying out surveys of wildlife around their school grounds.

Following a review of the results of this initial stage, Tanesha then hopes to engage the pupils in carrying out some behavioural studies of the animal she actually studies, the badger. This will involve further collaboration with local wildlife experts and with Science Oxford whose new Stansfeld Park education centre is already a wildlife haven, with a resident badger population.

So far, we have held two workshops for schools and organisations interested in our project. The first was held, optimistically, ahead of final confirmation of our grant award, in order to gauge interest and brief schools about the plan in the summer term of 2018. We recently held the second workshop, with more hands on activities and discussion of the logistics and a forward plan for meeting our objectives. This workshop involved teachers from two of the secondary schools and two of the primary schools, and pupils from both secondaries. 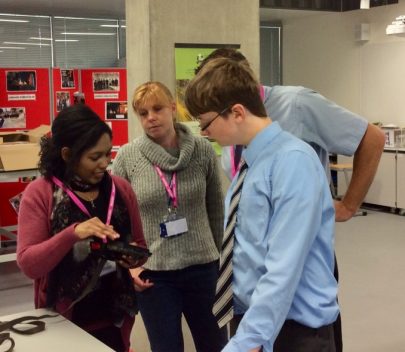 Tanesha showed us how to use the cameras and gave an introduction to how field work is conducted and what types of behaviour biologists look for. A really fun activity was asking the pupils to try to identify the sex, age, health and dominance of three of Tanesha’s co-workers by sniffing unwashed shirts they had kindly donated for the occasion! With a sense of smell less sophisticated than a badger’s, this was quite tricky but one pupil did get all four aspects correct for one of the shirt owners.

The next stage will be to set up and distribute our own cameras, purchased with the RSPG money, two each to the secondary schools, some of whom couldn’t attend the workshop but really want to take part. The secondary pupils will the test the cameras and data gathering strategies in the own schools, before being paired up with a nearby primary school where they will then pass on their experience to the younger pupils. The results of these general wildlife surveys will be shared at the next workshop early in the spring term, when teams from each secondary and primary school will present their initial findings and pose some research questions they would like to investigate further.

So, we’re all very excited, ready to get started on some camera trap deployments as soon as possible and hoping to share some exciting results in future blog posts.