The winning image is a product of a series of exposures, which were used for sophisticated white corona imaging.

Earlier this month we announced the winning images of this year’s Royal Society Publishing photography competition. Here, we talk to the overall winner, Petr Horálek.

Earlier this month we announced the winning images that were submitted to this year’s Royal Society Publishing photography competition. Here, we talk to the overall winner, Petr Horálek, about his interest in photography and how he captured a stunning image of a solar eclipse. 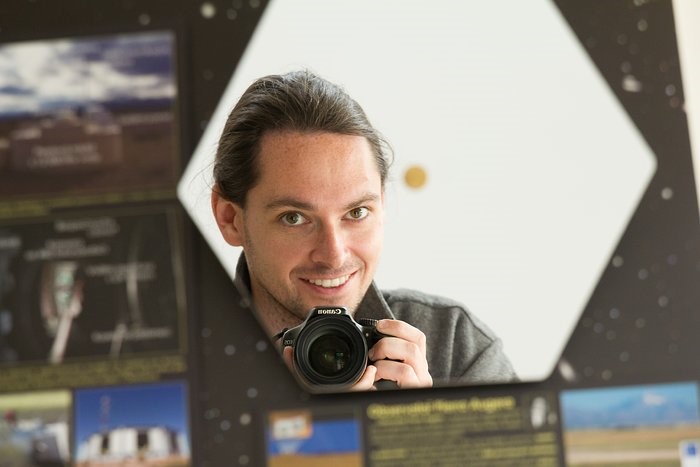 While I was studying astrophysics at Masaryk University of Brno I started my first job as an observer of fireballs with the Astronomical Institute of the Czech Republic. I had to use a few cameras – not typical cameras, but cameras with film. The observatory was part of an international network that monitored meteors and calculated whether a cosmic rock fell to the ground or just burned up in the atmosphere. This was very important and exciting, but at times could be boring. The only thing I had to do was change the film every three or four hours and check the weather for undesirable changes, so I had a lot of time. But I earned some money so the first thing I was able to buy was a camera, and I actually tried to make a documentary about skies. I didn’t plan to be a photographer. But somehow I found out that the data for the time-lapses could be used for beautiful pictures, so I learned how to process the pictures, especially with huge help from Professor Miloslav Druckmüller. This was in 2011. Now it’s been seven years and I’m still going.

The judges picked your photo as the winner as it fulfilled the competition’s aims of being aesthetically pleasing while conveying an interesting scientific phenomenon. Tell us a bit about the science behind the photo and how you managed to capture it.

The winning image is actually a product of a series of exposures, which were used for sophisticated white corona imaging by Professor Miloslav Druckmüller in a scientific project led by Professor Shadia Habbal of University of Hawaii. I was a member of a small group of photographers in Uganda, however there were more groups in the path of this unusual totality (in this particular case the very short totality in the path of the hybrid eclipse). They were located in Gabon and Kenya.

'Three diamonds in the sky' by Petr Horálek

Despite very uncertain and bad weather at all sites almost all groups were successful so we were able to determine some phenomena in the solar corona. The Sun was at a maximum of activity at that time and these images excellently showed some coronal mass ejections moving away from the solar surface, and by combining with SOHO data we could track these phenomena all the way from the outer to the inner part of the corona. The science is, however, much deeper, containing also photometric data of every single pixel in the corona portraits, which allows us to study the solar magnetic field above the solar surface, and determine reasons for the behaviour of plasma in the transitional zones of outer levels of solar atmosphere. By understanding this behaviour astronomers could be able to predict the space weather sometime in the future. But there is still long way to go and much to do. In the meantime, these visualizations of the scientific data are being shown to the public as educational material, because apart from science the solar eclipse is also such a beautiful natural phenomenon.

When you submitted the photo did you think you had a good chance of winning?

Not at all. I was expecting some honourable mention at most because when I saw the winning images of previous years, I understood there are so many better photographers trying for the luck that I can only be happy to be part of, which I definitely was.

Do you have any tips for someone who’s just started getting involved in photography?

Most of all I have one piece of advice: be patient. Astrophotography is not the type of photography where you can just make a series of short exposures and take the most beautiful one. Here you have to count usually with long exposures, durable equipment, hours to dozens of hours of post-processing, mostly with some basic knowledge of the mathematics of digital imaging. The photographed objects are often barely visible to unaided eyes and only sensitive cameras can help to reveal them. However, it is beautiful every time. I would recommend starting with simple experiments helping to recognize the limits of the camera you have. First of all, you need durable tripod, DSLR camera, wide angle lenses between 12 and 35 mm with minimal f number at least ~2.2 but preferably 1.4, and some remote control. Then focus by lifeview on the brightest object in the sky and prepare for some single exposures: try higher ISO, 15-30 exposures, different apertures (no bigger than 3.5) under a starry sky. With the results of these experiments you can see the real problems you will deal with, but also the potential of sky photography. Then can come panoramic shooting, stacking and so on…

What is the one thing you would love to photograph but have never been able to?

At the moment the biggest dream is a truly bright comet with a long tail such as comet Ikeya-Seki in 1966. I was born in 1986 when the Halley’s one was in the inner Solar System and so I have to wait until I am 76 to see it! And I missed the two really bright comets of 1996 and 1997 (Hyakutake and Hale-Bopp) because I was a child and nobody around me was interested in astronomy. What a shame that years later I found out both of the comets I could have seen from the window of my room. The very bright comets McNaught (2007) and Lovejoy (2011) were visible only from southern hemisphere. So naturally I dream about this very deeply.