Global science in a time of global turmoil

Professor Richard Catlow FRS reflects on the global nature of science, and why it will benefit every one of us if we ensure that international scientific collaboration continues to flourish.

"Science has always been an inherently international activity, and scientists have continued to collaborate during times of much greater upheaval." 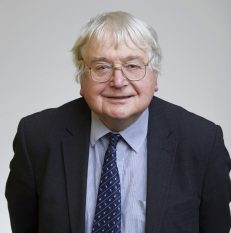 Richard’s work has offered insight into mechanisms of industrial catalysts, especially involving microporous materials and metal oxides. In structural chemistry and mineralogy. Simulation methods are now routinely used to predict the structures of complex solids and silicates, respectively, thanks to Richard’s demonstrations of their power.

As we enter a new year, it is more important than ever in these tumultuous times to reflect upon the fundamentally global nature of science, and why it will benefit every one of us if we ensure that international scientific collaboration continues to flourish. As the Society’s Foreign Secretary, I spend my days talking to scientists all over the world – but that is not unusual for a scientist. A survey of nearly 1,300 Fellows and grant holders from all the UK national academies (PDF) found that 95% had been involved in international collaboration in the last five years, and nearly 90% said that international collaboration was important to their careers.

We face, of course, much uncertainty over the future UK-EU relationship, at the same time as we see substantial changes to the political landscape elsewhere in the world. This is driving a fundamental rethink of the nature and importance of international cooperation and mobility, just as we are seeing increasing political polarisation and a greater degree of mistrust of scientists and experts. What does all of this mean for our international scientific relationships? And does this matter?

It is perhaps worth noting that such turmoil is nothing new. Science has always been an inherently international activity, and scientists have continued to collaborate during times of much greater upheaval. Notable examples include Humphrey Davy and Michael Faraday’s scientific expedition to Europe during the Napoleonic Wars, and Benjamin Franklin arranging for the American Navy to grant Captain Cook’s ships safe passage during the US War of Independence (PDF). And of course the Society was founded after a prolonged period of turmoil and political instability in Britain.

But supporting international scientific collaboration has to remain a fundamental part of the Royal Society’s mission. Two years ago, the #scienceisglobal campaign demonstrated the global nature of scientific teams around the world. This is business as usual for science. The Society’s activities in the first few weeks of 2019 neatly illustrate the point. We will launch a number of calls for the Society’s flagship international grants programmes, including those aimed at outstanding scientists across the world and supporting scientific capacity strengthening in developing countries, and convene high level international scientific meetings in China and Japan. The global breadth of such activities is nothing new, but has an added resonance at this crucial time for UK science.

Last year we invested over £73million in outstanding scientists, which included nearly 400 grants specifically to support international scientific collaboration and travel. Over half of the 643 leading scientists who were speakers, chairs and organisers of 33 Royal Society scientific discussion meetings – meetings convened to discuss cutting-edge research – were from outside the UK. This is just a small slice of UK scientific activity, but reflects how important our openness to people and ideas is in making us the scientifically excellent nation that we are.

Without this global collaboration we would not be able to build on each other’s ideas, work with the best in the world, and learn from them in order to tackle global challenges such as climate change and infectious diseases, or shape the development of new technologies such as low carbon energy, gene editing and artificial intelligence. Science seeks to understand the world, contribute to sustainable economic growth and to improve wellbeing, and there is added value by doing this together.

This is why the UK must and will remain outward looking and can and should play a global role in championing ongoing scientific collaboration around the world. We benefit hugely from people coming here and working with us, and they will only want to continue doing so if we preserve and maintain our scientific excellence, which means that it is crucial to get a deal from the Brexit negotiations that keeps highly skilled scientists working in the UK (PDF), retains access to funding and networks that support UK scientists to collaborate internationally, and maintains regulatory alignment that enables access to new medicines and technologies.

Maintaining and enhancing such collaboration is strongly in the UK’s strategic interests.  Overall, over half of the UK’s research (and rising) is the result of international collaboration. Nearly a third of the UK’s academic workforce comes from outside the UK, as do over half of PhD students. The UK’s scientific strengths and institutions are a key source of ‘soft power’ on the international stage (PDF), and science cooperation can help to improve relations between countries (PDF). Science and scientific evidence will also prove fundamental to developing the UK’s new trading relationships and agreements.

Ultimately, global science benefits all of us. It underpins a wide range of innovations in communications, healthcare, transport, environment and agriculture, which impact on everyone’s daily life. To reap the benefits, it is essential that we ensure continued support for the mobility, networks, infrastructure and funding that enable international scientific collaboration, and the outstanding science it underpins, to thrive.