How plastic pollution is threatening the home of green turtles

Read more about how plastic debris is affecting the UNESCO World Heritage Site of Aldabra.

Aldabra is a raised coral atoll: one of the largest in the world, a place where herds of giant tortoises still roam and thousands of seabirds form noisy colonies.

Associate Professor and Fellow of The Queen’s College, Oxford

In scientific terms, Aldabra is a raised coral atoll: one of the largest in the world, a place where herds of giant tortoises still roam and thousands of seabirds form noisy colonies. As on many islands, Aldabra has been a laboratory for evolution, and it has some unique animals, such as the flightless rail, that terrorises the local crabs.

Aldabra also has a remarkable history. During the 19th Century, Aldabra was exploited for its natural resources, particularly tortoises, turtles, and mangrove wood. Giant tortoises were particularly vulnerable, as they are easily picked up and survive for many months on ships, providing food for sailors. They once occurred on all islands in the Indian Ocean, but only survived on Aldabra, due to the intervention of none other than Charles Darwin.

In the 1960s, the exploitation of tortoises had almost stopped, but now a new threat loomed – the British Government had secret plans to build a military base, which would have had dramatic impacts. However, the plans were leaked and the Royal Society in London led the charge to save the atoll and established a research station in 1967.

Once Seychelles became independent, the atoll was placed in the care of the Seychelles Islands Foundation. They protect the atoll and it has gone from strength to strength – a real conservation success story – with the largest breeding population of green turtles in the Indian Ocean and incredible marine life. 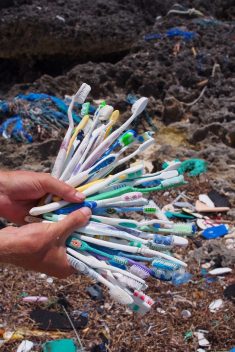 Some of the plastic toothbrushes that have washed up on Aldabra

However, sadly the atoll is being impacted by humanity once again. Huge amounts of plastic debris are accumulating on its beaches and impacting its wildlife. It’s time for people to step up again, and a joint team of Oxford students and Seychelles conservation volunteers organised an expedition to clean the beaches and to remove tonnes of accumulated plastics. They worked hard for five weeks in February and March 2019 and removed 26 tonnes of debris – including 60,000 flip-flops.

We want to share our story with as many people as possible to bring change to a wider audience and to encourage others to do the same. So, follow our story on Facebook and on Twitter.

Do post your suggestions for the kinds of educational materials you’d like us to produce. What would you like to know about this magical island and the threat of plastic pollution?