Why was an 1808 paper by Jean André De Luc FRS, ‘On the galvanic pile’, never published by the Royal Society? Jon Bushell investigates.

De Luc wrote to the Society in December 1809, ‘begging that the drawings annexed to these papers should be lent to me, in order to have them engraven, as I meant to publish my papers myself; but to this day I remain without an answer’.

The Royal Society Library receives a regular flow of research enquiries about our archives. These aren’t always straightforward to answer, but they do provide interesting opportunities to dig into the collections, and there are plenty of stories to uncover. I was recently asked to find out why an 1808 paper by Jean André De Luc, 'On the galvanic pile', was never published in the Royal Society’s Philosophical Transactions: 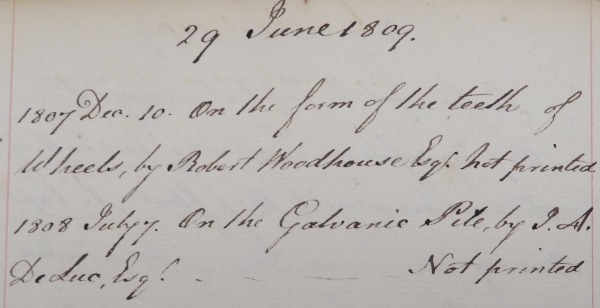 Born in Geneva in 1727, De Luc was a prominent natural philosopher whose interests lay in geology and meteorology. On his regular excursions into the Alps, he amassed a significant collection of fossils and mineral samples, which now resides in the Natural History Museum of Geneva. De Luc took part in the first successful climb of Mont Buet in 1770, making numerous atmospheric measurements on the trek. He used the results to calculate the height of the mountain, and his work was published in the Philosophical Transactions.

In 1773 De Luc decided to move to England, after the failure of his business in Geneva. He was elected as a Fellow of the Royal Society in this same year, and in 1774 was appointed to the royal court as Queen Charlotte’s reader. He held this position for the rest of his life, giving him a steady income and ample leisure time to devote to his scientific pursuits. 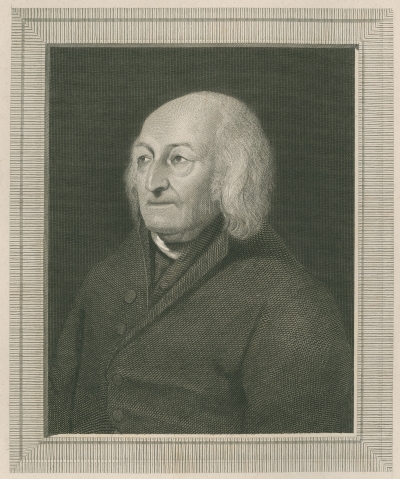 While the bulk of his scientific work was geological and meteorological, De Luc’s wider research interests included physics and electricity. In 1804, he published Traite elementaire sur la fluide electro-galvanique, which outlined his experiments with the galvanic pile (today more commonly called the voltaic pile), the first electrochemical battery. He presented a copy to the Royal Society Library in January 1806.

De Luc was far from the only Fellow experimenting with electricity at the time. Humphry Davy discussed his experiments using the galvanic pile to split compounds in his 1806 Bakerian Lecture ‘On some chemical agencies of electricity’. He referred to the process as ‘decomposition’, but today we know it as electrolysis.

To understand why De Luc’s paper was never published, we first need to look at the prevailing ideas about electricity at the time. By the end of the eighteenth century, the most widely accepted theory was based on the work of Benjamin Franklin and William Watson, who independently proposed that an invisible fluid capable of permeating solid matter caused electricity. Objects containing excess fluid became positively charged, while matter containing too little fluid was negatively charged.

While this ‘one-fluid’ theory of electricity was widely accepted, Davy’s 1806 lecture took a more sceptical view. He argued that ‘In the present state of our knowledge, it would be useless to attempt to speculate on the remote cause of the electrical energy’. More significantly, he suggested that electricity might not be caused by a separate entity, but was rather ‘an essential property of matter’.

Davy’s arguments certainly seem forward-thinking to modern eyes, but De Luc disagreed strongly with his conclusions. In Traite elementaire, De Luc argued that fluid theory was crucial to understanding electricity, and he clearly felt that his work had been ignored by Davy. When ‘On the galvanic pile’ was read out at a Royal Society meeting on 7 July 1808, the minutes record that ‘These experiments which have already been described… the author has nevertheless thought fit to repeat being of opinion that if they had been attended to they would have prevented those ideas’. 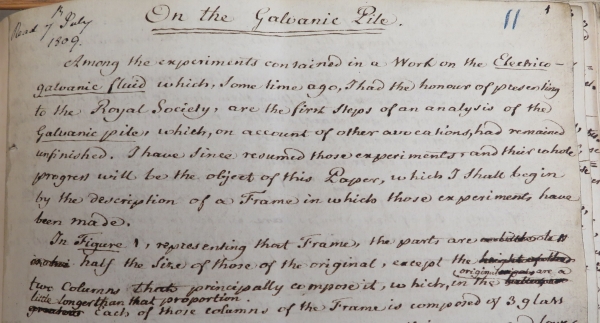 Papers read out at Royal Society meetings normally went to the Committee of Papers, who decided what to publish in the Philosophical Transactions. The Committee delayed a decision on De Luc’s paper several times, before finally deciding in July 1809 not to publish it at all. Eventually, De Luc published a similar article in the Journal of Natural Philosophy, Chemistry and the Arts (Nicholson’s Journal) in 1810. He accompanied this with a letter to Nicholson in which he heavily criticised the Society’s handling of his paper.

Until the introduction of a peer review system in 1831, much of the work of the Committee of Papers took place behind closed doors and was not recorded in detail. De Luc was initially told that his paper was too long for publication, and he resolved to shorten it. ‘One of the abbreviations that I adopted was to suppress the application of my experiments to Mr. Davy’s theory’, he notes in his letter.

De Luc clearly felt forced to tone down his criticism of Davy in order stand a chance of getting his paper printed. The situation cannot have been helped by the fact that Davy served on the Committee of Papers at this time, and it is hard not to sympathise with De Luc’s frustration. Potential conflicts of interest such as this certainly demonstrated the need for a more robust review process for scientific publication in the nineteenth century. 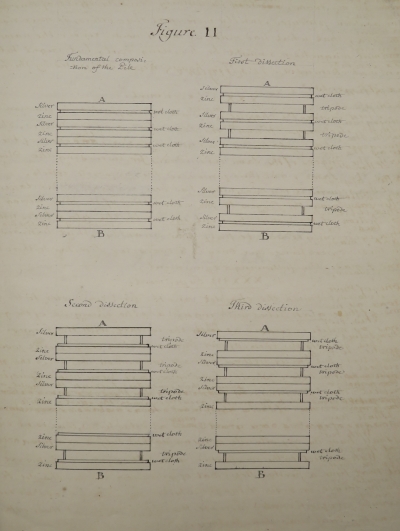 Despite not publishing his work, the Society elected to keep De Luc’s manuscript in the archives, which irritated him further. He wrote to the Society in December 1809, ‘begging that the drawings annexed to these papers should be lent to me, in order to have them engraven, as I meant to publish my papers myself; but to this day I remain without an answer’.

It is obvious that De Luc felt that Davy and the Committee of Papers had treated him unfairly; however, scientific thinking on electrical theory was moving onwards at this time. De Luc may have made important contributions to the study of electricity, but his steadfast belief in fluid theory was beginning to look positively out-of-date.