Preparing girls for careers in tech with free coding clubs

Read about how Girls Who Code is closing the gender gap in tech.

It’s been one year since Girls Who Code launched in the UK, and there are already over 200 Clubs all across England, Scotland, Wales and Northern Ireland.

The world of tech has entirely transformed every aspect of our lives, including the world of work. In the United Kingdom, women make up 50% of the workforce, yet they hold less than 15% of computing jobs.

Computing is where the jobs are — and where they will be in the future — but women and girls are being left behind. To close the gender gap in tech, we need everyone involved, even those with no experience in tech or computer science.

It’s been one year since Girls Who Code launched in the UK, and there are already over 200 Clubs all across England, Scotland, Wales and Northern Ireland.

Clubs are run by club facilitators like Jackie and aim to provide a space for girls to explore their interest in the many aspects of computer science. Club members build hard and soft skills like teamwork, time management, confidence, communication, functionals, conditionals, variables and loops.

“I grew up at a time where computers, the internet and social networks were becoming more common in households. Our parents were learning how to use all of this new technology alongside us, so my younger brother and I spent a lot of time just clicking around. That’s how I developed a real affinity for computers. I had no interest in the things we were learning in IT at school so I wouldn’t have even dreamt of doing Computer Science. I wish I had understood that I was already doing Computer Science and that I actually quite liked it! My manager at work recently suggested I start a Girls Who Code Club at our Library.

I was nervous since I’m not proficient in any coding languages. I’ve used HTML in the past but not for a long time. I looked more into what the organisation is about and understood that I’m not actually teaching, I’m giving the Club Members space to learn and teach themselves, so I got really excited. I want more girls to be curious about computers instead of being intimidated by them, and I think support systems and strong friendships for young girls is so important for their confidence later in life. If I can provide that while I’m also learning a new coding language with them in the process, then why not?”

Clubs typically meet weekly at non-profit host sites such as schools or libraries and use the free tutorials from Girls Who Code’s online platform to produce a coding-based Project together (e.g. website, application, animation etc.), selecting from the multiple coding languages provided. The Project is a vehicle to help Girls relate to computer science in the context of their broader passions. It encourages more engagement and investment in the process of learning, creating and ultimately leads to a higher retention rate of girls in computer-science related subjects.

Girls Who Code also provides ‘Sisterhood Activities’ to build friendship and encourage teamwork. The organization also provides ‘Women in Tech Spotlights’ to shine a light on successful – but often overlooked – women in tech in order to inspire the girls to consider a future in the tech industry.

“During one of our sessions we watched a video on Kelechi Anyadiegwu, founder of the online retailer Zuvaa. Kelechi is Nigerian, and so is one of the girls in my class. The smile on her face seeing a young Nigerian woman talking about the massive success of her online business really, really warmed my heart. Representation matters, especially in spaces where we don’t often see women of colour, and I think our girls seeing women who look like them doing amazing things demonstrates to them how much they’re capable of.”

The world needs more girls and young women in computing. Together, we can change the image of what a programmer looks like and does. 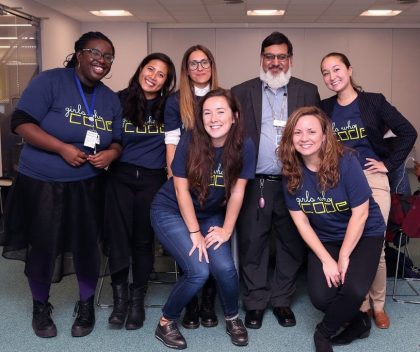 Note about Girls Who Code and the authors:

Girls Who Code is an international non-profit working to close the gender gap in technology and change the image of what a computer programmer looks like and does.

Girls Who Code has reached 185,000 girls around the world through its programs and 100 million people through campaigns, advocacy work, and New York Times best-selling series. To join the movement or learn more, visit uk.girlswhocode.com. If you’re ready to start a Club in your community, apply at girlswhocode.com/international_application. Follow the organization on social media @GirlsWhoCode.