Guest editor Professor Richard Fenner discusses how our cities can respond to a rapidly escalating threat.

Issues of Philosophical Transactions A can be guest edited by any scientist or research group on a topic of interest, creating the opportunity to present work from different disciplines.

Director of the MPhil in Engineering for Sustainable Development, University of Cambridge

Dick Fenner is Professor of Engineering Sustainability in Cambridge University's Engineering Department and is the Director of the taught MPhil in Engineering for Sustainable Development. He is a Chartered Civil Engineer and a Fellow of the Chartered Institution of Water and Environmental Management.

In 'Urban Flood Resilience', guest editor Professor Richard Fenner brings together work from engineering, geography, planning , social science, hydrology, economics and architecture to discuss how our cities can respond to a rapidly escalating threat. He tells us how this issue came about, and why it's important to challenge traditional flood management in the era of climate change.

This issue has grown out of the work of the Urban Flood Resilience Research Consortium (2017-20), which has been working on ways in which transformative change can be achieved in managing urban water through the adoption of a whole systems approach to urban flood and water management. Extending our earlier work of the Blue-Green Cities project (2013-2016), the emphasis has been on using Green Infrastructure solutions to manage flood risk. Whilst this work has had a strong UK focus, it echoes many similar initiatives in other countries with the same goals in mind: to fundamentally restore the benefits of pre-development hydrology in rapidly growing urban centres. It therefore seemed timely to bring much of this work together and set our approach to urban flood resilience in the UK alongside contributions from the Netherlands, China, Australia, New Zealand and India.

Flooding is occurring more frequently in many countries, often affecting communities who have not been exposed to flooding before. The need to adapt to these unwanted and damaging events in ways that are resilient and sustainable is the underlying premise behind this themed issue.

The concepts explored in this issue challenge traditional flood management through hard engineered drainage systems that rapidly convey water “away” in pipes. In reality there is no such place as “away”, but simply “not here”. This conventional approach moves water further down a catchment where it becomes someone else’s problem and can lead to more catastrophic flooding. This notion of “drainage” (as shown in Figure 1) has been used as the conventional way of managing flood risk since cities began to emerge in modern times. 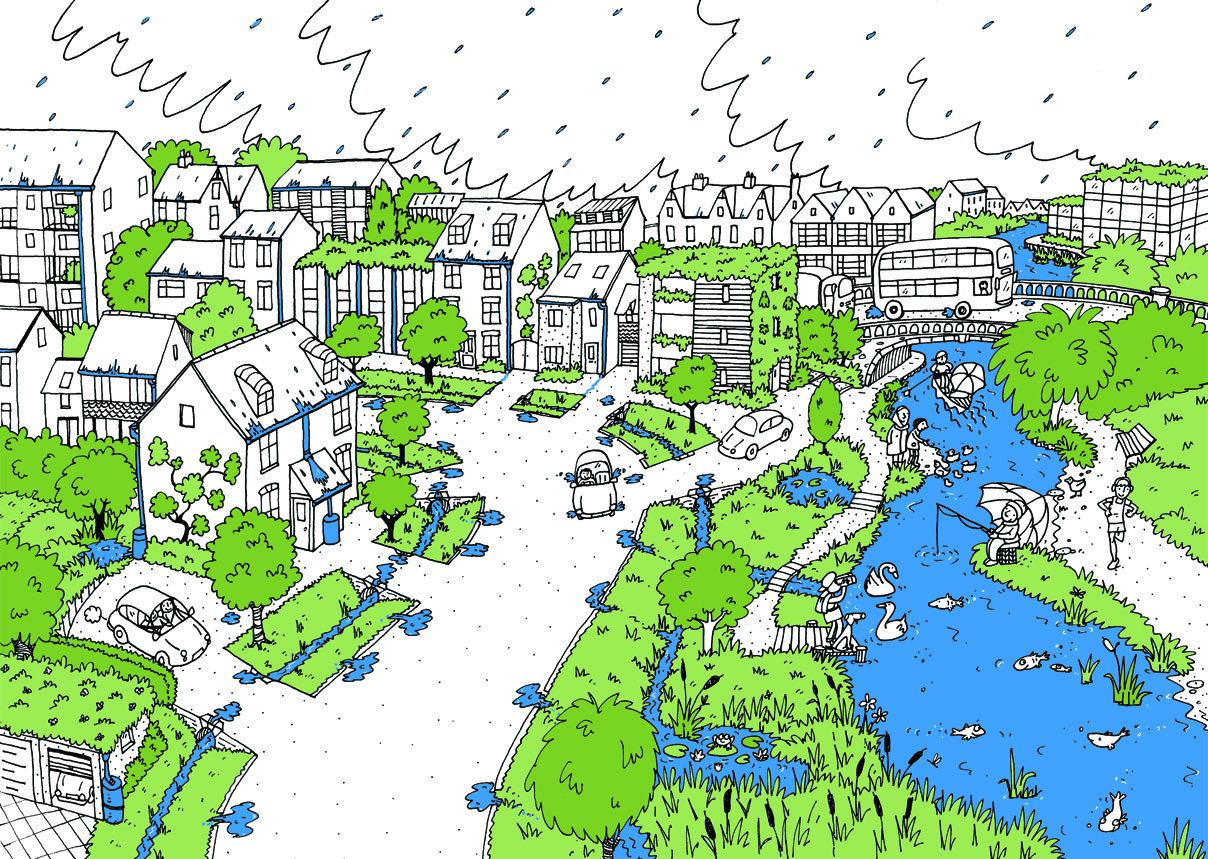 The papers in this issue challenge both the notion of “drainage” and the negative perception that this constitutes a “risk”. Instead, approaches are preferred which use natural and green solutions to deal with the water at source, where it initially falls during a storm (as shown in Figure 2). 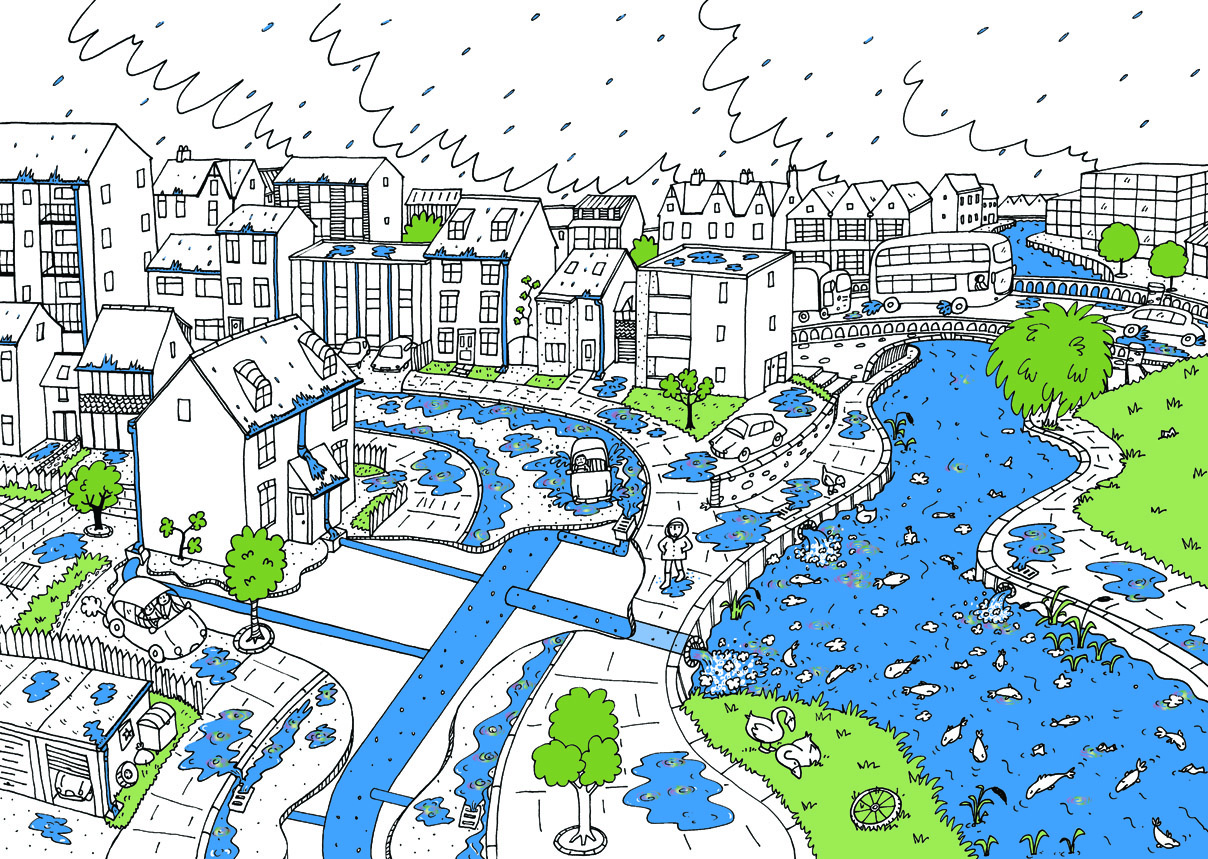 These blue-green methods can be valued as multi-functional assets, providing a range of other benefits which contribute to wider practices of urban greening, and present real opportunities for enhancement of urban environments.

To achieve this means looking at the problem as a single system. This requires paying attention to what is happening in all parts of the physical catchment, both rural and urban, as well as all the institutional, governance and regulatory requirements that intersect in a web of messy and conflicting problems. Solutions therefore extend beyond elegant engineering and more comprehensive modelling, to innovation, adoption and implementation of new ideas in the planning and development sectors. This issue brings perspectives from these areas together, highlighting where the real barriers to change may lie.

The papers have been contributed by authors from a wide range of disciplines including engineering, geography, planning, social science, hydrology, economics and architecture. Whilst each reflects the norms and understanding of flood problems from the perspective of these different backgrounds, it is clear that solutions need to embrace all these various dimensions. Never has the need for such a multi-disciplinary approach been so apparent.

My research interests are in water, sanitation and sustainability issues in both developed and developing countries. My current focus is on drainage and flood resilience in the UK, and water sanitation and health (WASH) issues in Africa.

I began my career by working on the maintenance of buried pipe networks, trying to work out how to cost effectively intervene just before a failure occurred, rather than just after! This involved examining the problems created by infiltration of groundwater into sewers, and identifying when small leaks on water distribution systems could rapidly turn into large bursts.

Increasingly however I have been turning away from working with large infrastructure systems, which often can be shown to be unsustainable, and instead seeking to deliver the necessary levels of service either from better use of existing assets or by using local, small and well distributed solutions such as Sustainable Drainage Systems. In this work, as well as my work in the WASH sector, I try and take a systems view of the problem, as this can help avoid unintended outcomes as well as highlight where the most effective solutions and interventions might be.

What’s the biggest take-away message from the papers in the issues?

This is captured in the final paper, ‘Managing flooding – From a problem to an opportunity’ by Richard Ashley, Berry Gersonius and Bruce Horton, which reinforces my earlier comment about the paradigm shift needed in flood management. The solution needs to be framed as an opportunity rather than seeing the problem as a risk. If approached from this perspective, stormwater can be treated as a huge potential resource which can be used in some contexts for energy generation as well as providing an essential source of future water supplies. Using it in this way makes perfect sense rather than merely draining it “away”.

Beyond that, the use of green infrastructure to manage stormwater provides a range of other important benefits from enhancing urban biodiversity through creation of new habitats, sequestering carbon and trapping air pollutants, as well as providing recreation and amenity opportunities for local communities. Urban flood resilience is about responding to the need to protect against flooding through creating enhanced urban environments in Blue-Green Cities.

Philosophical Transactions A is actively seeking proposals for theme issues on topics within engineering, mathematics and physical sciences. Email the Editorial Office to discuss your proposal or visit our website for more information on how to become a Guest Editor.