A look at the Antarctic observations of physicist Louis Bernacchi, the most experienced scientist on Captain Scott’s Discovery expedition to Antarctica in 1901.

I've recently been delving into the Royal Society’s Meteorological Archives, and have found some fascinating gems.

I've recently been delving into the Royal Society’s Meteorological Archives, and have found some fascinating gems.

My favourites so far are the Antarctic observations of physicist Louis Bernacchi, the most experienced scientist on Captain Scott’s Discovery expedition to Antarctica in 1901. Before that, Bernacchi had been one of the first to spend a winter on the Antarctic continent, as part of the Southern Cross expedition of 1898-1900 led by Carsten Borchgrevink. 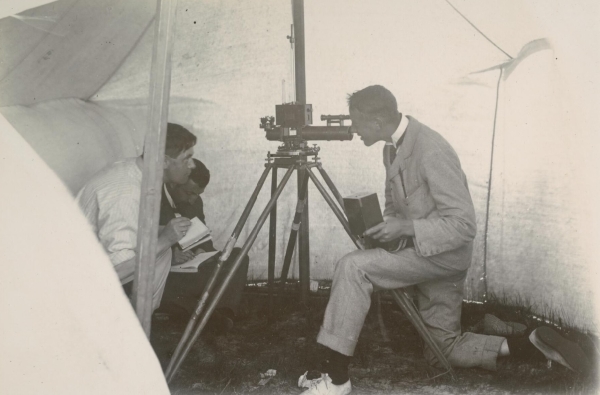 This recent look at our meteorological collection was prompted by a presentation I gave on the Royal Society’s historical weather data at the inaugural UK meeting of a new British arm of ACRE, the international Atmospheric Circulation Reconstructions over the Earth. This initiative works to retrieve our global climate history, harnessing the work of many professionals and volunteers to recover historical, terrestrial and marine weather observations through digitisation, in order to make it more accessible to scientists and researchers.

Along with our Digital Resources Manager, I found myself in a room at the University of Reading filled with experts in weather, from climatologists to researchers working on historical epidemiology. We informed them that, in the vaults of the Royal Society, we have 394 weather data sets dating from 1706 to 1915. As well as the Royal Society’s own measurements, taken at our London headquarters consistently from 1774 to 1843, they cover an international range, and include observations of atmospheric phenomena such as magnetic and electrical fields as well as weather.

The data, gathered on land and at sea, was recorded by an intriguing variety of weather watchers, from high profile scientists such as John Herschel to ships’ officers, mining agents and rectors. While Herschel was a weather watcher of questionable enthusiasm, only recording a few days of observations at the vernal equinox, some truly dedicated weather-watchers kept records for years and responded to calls from the Royal Society to send these in for comparison with their own records.

Apart from recording locations and dates, there is little information about the Meteorological Archives in our public catalogue – certainly not enough for climate scientists to tell whether a data set is complete and robust enough to be of use to them. Armed with the information from the ACRE meeting about priority geographical areas and those with most gaps in historical information, I decided to start by looking at our Antarctica records, with a view to fleshing out the catalogue information and adding it to the metadata registry on the Climate Change Service’s newly launched C3S online portal. This aims to collect and share information on past, current and planned data rescue projects, and I encourage other archivists out there with weather data in your archives to use the portal to let researchers know what you have, and potentially link up with interested parties who could help digitise and make use of it.

I found that the meteorological diaries we have from Antarctica are largely the work of Louis Bernacchi, appointed as physicist in charge of meteorological and magnetic observation on the Discovery expedition. It appears that the appointment was a stroke of good fortune for both parties: Bernacchi, already an Antarctic veteran and trained in magnetic observation at the Melbourne Observatory, happened to be on hand to join the expedition when it arrived in New Zealand after the previously-appointed physicist was dropped due to ill health.

We have original Bernacchi field notebooks from both the Southern Cross and Discovery expeditions. The former are largely magnetic observations, made to try and understand the Earth’s geomagnetic field and its relationship to the weather, as well as effects on other natural processes and human activities such as navigation. The notebooks from the Discovery expedition, meanwhile, are mostly records of atmospheric electricity readings. A photograph in one volume shows Bernacchi at work with a portable electrometer, designed by Lord Kelvin, who had previously explained the importance of the study of electrical fields in weather forecasting:

‘… there can be no doubt but that the electric indications, when sufficiently studied, will be found important additions to our means for prognosticating the weather’ (from a speech at the Royal Institution, 1872) 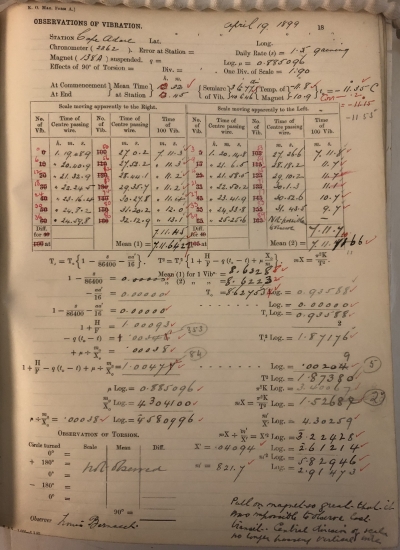 Bernacchi was an excellent record-keeper. His notebooks include his annotations on exactly which instruments he was using, where they came from, their condition and calibration, and directions for their correct use, giving us good context on how his observations were taken. The photograph below is annotated to demonstrate how the electrometer – in this case, an early design of Kelvin’s which uses a match as a flame probe to generate local ionisation – was used. 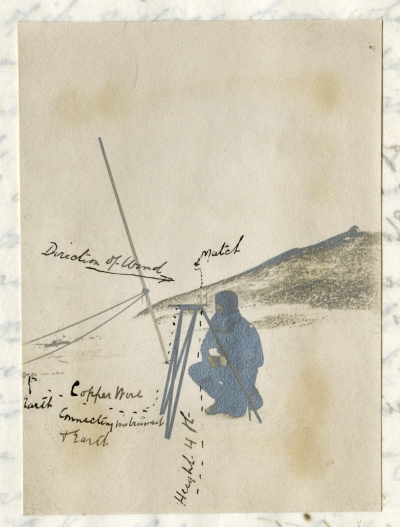 But my favourite of all the Antarctic weather observations in the archive is the Discovery aurora diary, in which Bernacchi and other expedition personnel (including Scott) record instances of the southern lights or aurora australis. Bernacchi’s instructions at the front of the notebooks outline what observations to make, including duration, extent of arcs and streamers, intensity, speed of motion and accompanying weather conditions, and there are some wonderful descriptions and sketches of auroral patterns. 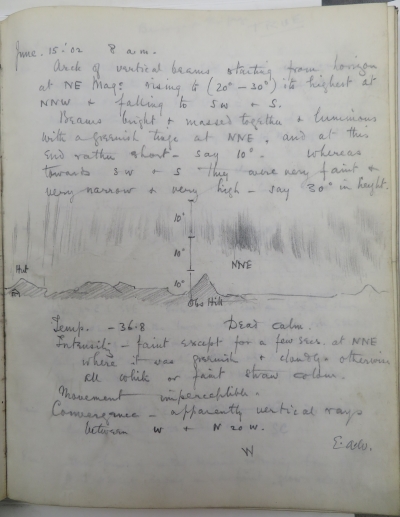 Tucked into the back of the diary is a printed chart recording the observations, which was also published in the South Polar Times. This was the expedition’s own self-produced newspaper; they obviously needed something to keep them entertained during those nights when the aurora wasn’t performing. 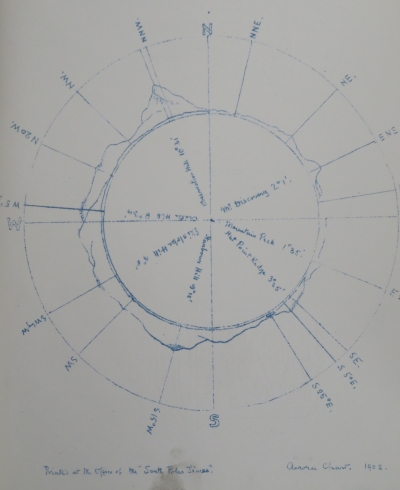 Thanks to an 1839 decree of the Meteorology Committee (everything at the Royal Society is governed by committee!), the meteorological data sets were identified and kept separately from the rest of the archive in their own series. There is also meteorological data to be found elsewhere in the Society, and much more work to be done to catalogue and digitise all this material, making it of potential use to climate scientists trying to reconstruct historical weather and get a better idea of long-term weather patterns. For now, keen weather-watchers can see much more in our current ‘Stormy Weather’ exhibition, alongside fascinating instruments, observations and weather diaries from the Met Office archive. Find out more about the exhibition on our website.