Ellen Embleton looks at the lack of representation of women in scientific portrait collections, and considers five commissions from 2013 that aimed to increase their visibility on the walls of Carlton House Terrace.

'I am very pleased that we have seen a huge change over the last few years, in that we have a sizeable number of prominently displayed portraits of women, reflecting the greater awareness of women in science.'

Last week the Royal Society made history with its first ever digital Summer Science Exhibition (SSE), which took to YouTube and social media with a range of talks and activities for members of the public to enjoy from home. As this was going on, I just so happened to be cataloguing a set of portraits from a former moment of SSE history, the 2013 Scientists exhibition.

Kennard has a keen interest in the overlapping realms of art and science, specifically neuroscience, a subject he has written on in the past. Therefore, it was important to him to foreground the science of his sitters in their likenesses. He asked them to bring a small object or reflection that would say something about how they thought about their science to their sittings and the result is five truly wonderful portraits, each with a powerful sense of the sitter’s personality.

Francesca Happé is a cognitive neuroscientist specialising in autism-spectrum disorders, with a particular interest in undiagnosed autism in girls and women. She is depicted with four Lego figures, an acknowledgement of her engagement with Lego Therapy, an evidence-based approach that aims to develop social communication skills in autistic children such as sharing, eye contact and problem-solving. Zita Martins holds a sample of carbonaceous chondrite, the analysis of which is central to her astrobiology research, in which she develops methods of detecting life on other planets; while Giovanna Tinetti is depicted with a representation of a planet, signalling her work in galactic planetary science.

We see Sarah-Jayne Blakemore at a table inscribed with a quotation from Shakespeare’s The Winter’s Tale, in which the Old Shepherd bemoans the tumultuous teenage years ‘between ten and three-and-twenty’. This is a playful nod to her work in the development of social cognition in adolescents, recently published in her book Inventing Ourselves: The Secret Life of the Teenage Brain.

The inscription below theoretical epidemiologist Sunetra Gupta might seem a little more cryptic. However, when you know that her research – including her most recent work on Covid-19 – uses mathematical models to form hypotheses on the processes that determine the structure and makeup of pathogens, the equation and smiling life form make more sense. 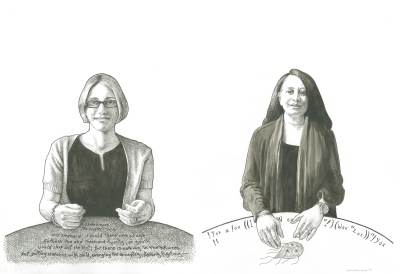 I asked Uta why 2013 felt like the right time to commission these portraits and investigate the issue of female representation in science. She responded:

‘A decade ago, gender inequality stood out as a burning social injustice at all levels. This was true also for the composition of the Fellowship of the Royal Society, and it was reflected in the dearth of images of women scientists in Carlton House Terrace. I am very pleased that we have seen a huge change over the last few years, in that we have a sizeable number of prominently displayed portraits of women, reflecting the greater awareness of women in science. Diversity is of key importance in research. Advances are driven by arguing across different perspectives, backgrounds, and skills.’

As Uta suggests, the visibility ‘problem’ with women and science manifests itself clearly in historic portrait collections, where representations of women are few and far between. This is something that the Library Team and Committee are working hard to remedy, fully aware of the effects that visible female role models can have on performance. However, female invisibility extends beyond visual art. As discussed in this Notes and Records paper, it is also enforced by stereotypical narratives of science, which traditionally portray women’s work as secondary and women themselves as assistants, masking their many and great contributions to the story of science.

As a memory institution, the Royal Society Library has a responsibility to make space for historically marginalised stories and voices whenever we encounter them, or a distinct lack of them, within our collections. It is heartening to hear Uta comment upon improvements in representation at the Royal Society since Scientists, and I can only hope we continue to make such strides in the years to come.