2021 marks an important crossroads for the UK’s rural landscape, as we design and pilot domestic agriculture and environment policies to replace those of the EU. Later this year, the eyes of international policymakers will turn to the UK as we host the international climate conference, COP26. The Royal Society has commissioned Ipsos MORI to conduct a public dialogue to better understand the public’s perceptions of – and priorities for – rural land in the future.

At a time when political division and social inequality is rife, communicating a shared vision for a sustainable, equitable future for rural land could offer a point of reconciliation.

Leaving the EU brings an end to the UK's participation in the Common Agricultural Policy and grants us the opportunity to redefine our domestic environmental and agricultural policy. This process is currently taking place with two major bills passing through the Westminster Parliament, and parallel processes taking place in the devolved administrations. Our rural landscapes, and the value we derive from them, are likely to change as a result.

These changes to the countryside will affect everyone in society – not just those living in rural areas. To understand how people from around the UK perceive rural land and how they prioritise the benefits it provides, the Royal Society commissioned Ipsos MORI to conduct a public dialogue. The dialogue was conducted entirely online with groups of participants from four regions of Great Britain – East Anglia and the Fens, the West Highlands, North Wales, and Southwest England. The results provide insight into how we might communicate and manage the imminent transformation of the UK landscape.

The report shows how valuable deliberative dialogue between policymakers, scientists and the public can be in hearing and responding to society’s concerns. Land use is a highly complex issue to describe and discuss because of the intricate relationships between natural processes and human interventions. The challenge lies in helping people to understand these relationships better, whether relating effects that national policy will have on people’s local area; or relating lifestyle changes – such as shifts in diet – to changes in what food is grown. People will be more likely to accept future land use change when they understand how it is likely to affect them personally and how it relates to the global challenges of climate change and species loss. This will require decision-makers to communicate coherent narratives about land use which are responsive to people’s aspirations and concerns.

There is a need for a pluralistic approach to such narratives because public priorities for the countryside vary. In the dialogue, people’s attitudes to things like culture, nature, politics and consumer choices intersected in different ways to produce a variety of outlooks on rural policy. Ipsos MORI have subsequently drawn out six different personas whose priorities and concerns cover a broad spectrum. While the groups we worked with came from four different regions of the UK, each of the six personas was represented in each region. 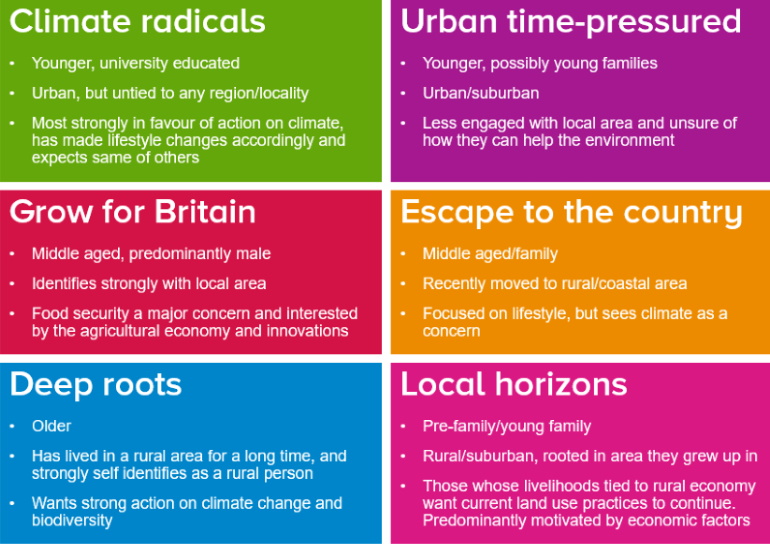 The dialogue set out three possible versions of the future of the UK countryside. These scenarios were brought to life for participants through a package of physical objects produced by creative agency The Liminal Space. These were designed to provoke and inspire the participants to interrogate the things they did or didn't want to see in the future. The first, ‘Follow the market’, kept the UK on a broadly business-as-usual approach to how it used its countryside but with a greater focus on economic growth, with land being used for premium agriculture, leisure and development and cheap food being sustained by imports from overseas. The next, ‘Home front’, prioritised food sovereignty, in which the UK increased the proportion of food consumption from domestic sources through a variety of intensive farming techniques, with the area of land used for conservation and recreation decreasing as a result. Finally, ‘Climate coordination’ represented a version of the future in which climate goals were met and species loss was averted, but the cost of food – especially meat – increased.

The persona groupings gravitated towards different scenarios with their preferences changing dependent on the time scale they expected different changes to occur. Each group took distinct paths to arrive at their final conclusion and were drawn by particular aspects from each – such as the imperative to tackle climate change, maintenance of wildlife, agricultural innovation, localised food sources, impacts on jobs or the economy; but over the course of the dialogue the majority of people in each persona grouping were willing to accept landscape change as necessary or – in certain cases – desirable, with most deterred by the ‘Follow the market’ scenario which most closely resembled our current system of environment and agriculture. Comprehending the complexities and uncertainties of land use change in the two alternative scenarios was no small task, not least because moving from the status quo would likely involve significant disruption of lifestyle. Despite this, participants were able to place themselves in these disrupted futures after considering the trade-offs and benefits.

Unsurprisingly, while not directly related to the subject-matter of the dialogue, COVID-19 featured as a major paradigm throughout the workshops. Participants’ experiences from the past year helped them to frame their own capacity for adaptation, along with a vision for how collective, state-supported action can help to resolve a global crisis.

Although the majority of rural land is privately owned, it is still in many ways a shared national asset in which the public have a stake, and as such careful, participatory deliberations about its future have the potential to bridge ideological and political rifts. At a time when political division and social inequality is rife, communicating a shared vision for a sustainable, equitable future for rural land could offer a point of reconciliation and help to create a sense of unity and shared endeavour. There is an inclusive and inspirational story waiting to be told in which every acre of the UK, from pasture to cropland, moor to marsh, has a part to play in achieving a sustainable, prosperous future.

The Society will be using the findings from the dialogue to help shape our thinking in relation to future land use policy. This will be set out in our Multifunctional Landscapes report in autumn 2021. The report will include a chapter on how to approach land use change in a manner which is inclusive of the views and needs of land managers, the rural economy, and wider society.