The videos from our first first fully online history of science workshop, ‘Computers and Computer People, 1950s-1990s’, are now available on demand. Rupert Baker gives an overview of the themes and content.

We hope we’ve played a part in preserving for future audiences a record of the major players and their innovations.

Over seventy years ago, in 1948, the Cambridge Mathematical Laboratory exhibited a memory system for ‘an Electronic Digital Computing Machine’ at the Royal Society’s Summer Science Exhibition. By 1957, the Ferranti company was demonstrating the principles of electronic computing at the same event.

We’ve come a long way since then. A little while ago, the Royal Society Library held its first fully online history of science workshop – not such a milestone perhaps, but an indication of how much computers have changed our ability to communicate.

The event, ‘Computers and Computer People, 1950s-1990s’, brought together a distinguished group of contributors with, in many cases, personal knowledge of developments in the UK computer industry. We’ve now edited the videos from the event and put them all up on our Royal Society YouTube channel for public viewing. This article gives a summary of the contents of each of the four themed sessions, with screenshots to provide a flavour of what you’ll be able to see; there are also direct links in brackets to each of the 14 presentations:

Session 1, Hardware, featured contributions from two Fellows of the Royal Society. Steve Furber FRS gave an account of his work in the early 1980s on the first ARM microprocessor (presentation 1), and David May FRS looked back to the same dynamic era in UK computing with his talk on the development of the Inmos transputer (presentation 2). David was also kind enough to pre-record an extended 45-minute career retrospective interview which we’ve added to the video list (presentation 3).

Chris Burton from the Computer Conservation Society took the story even further back with the story of the Manchester Baby, the first electronic stored-programme computer (presentation 4). Chris was followed by Sir Anthony Cleaver, former chairman of IBM, who gave the first of two talks on the many significant innovations made at IBM Hursley (presentation 5), and the session concluded with a panel discussion bringing together all the participants (presentation 6). 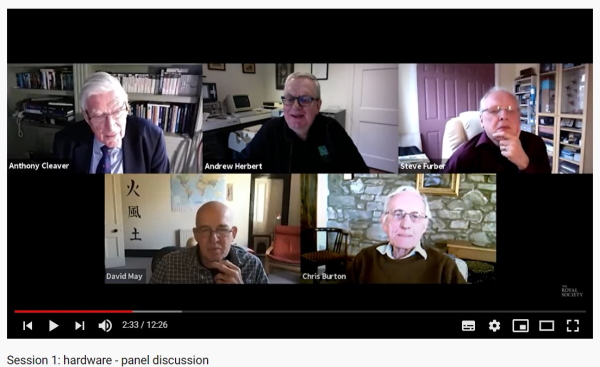 Another of our Fellows, Alan Bundy FRS, led session 2 on AI with an account of the early years of the discipline at the University of Edinburgh, where Alan has worked since 1971 (presentation 7). Following this, the workshop audience heard from Tony Hey, who returned to the theme of the transputer and the UK’s important contribution to supercomputing (presentation 8). 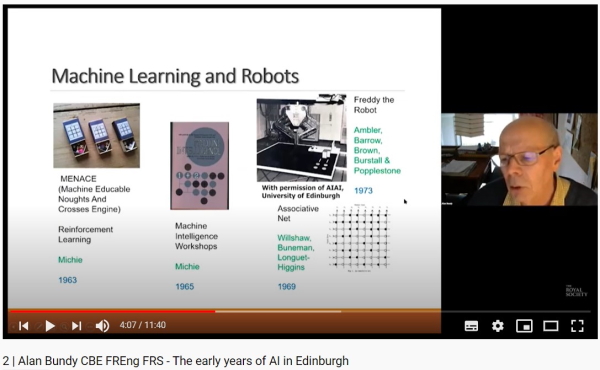 Turning to the theme of People in computing, session 3 began with science writer and broadcaster Georgina Ferry and her talk on LEO, the Lyons Electronic Office, used by catering company Lyons as a management information system – the first ever use of a computer in this type of business application (presentation 9). We then heard an eye-witness account of the lives of three UK computer pioneers, Maurice Wilkes FRS, David Wheeler FRS and Roger Needham FRS, from David Hartley, who worked closely with all three in Cambridge (presentation 10). Session 3 wrapped up with a ‘lightning talk’ from John Naughton, author of A brief history of the future, intriguingly titled ‘Memoir of a recovering Utopian’. Recovering from what? You’ll have to watch the video to find out! (presentation 11). 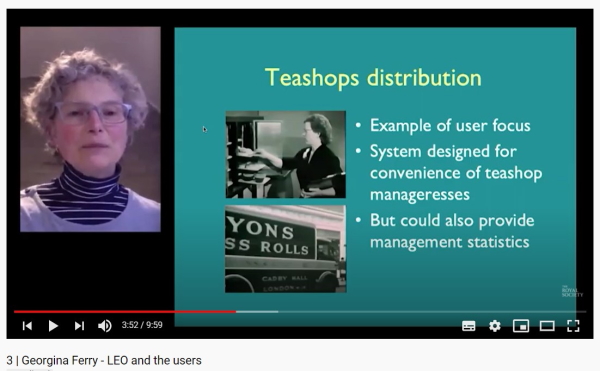 The fourth and final session dealt with the theme of Software, and began with a return to Hursley in the company of the second of our IBM speakers, Chris Sharp, who gave a summary of more than 60 years of software innovation and the engineers who have driven it forward (presentation 12). Our Royal Society archivists all tuned in keenly to the next talk, in which David Holdsworth gave some pointers on the important topic of preserving computer software as historical artefacts (presentation 13). To conclude the session and our series of videos, a panel featuring Martin Campbell-Kelly, Troy Astarte and David E Dunning provided their own personal reflections on the history of software (presentation 14). 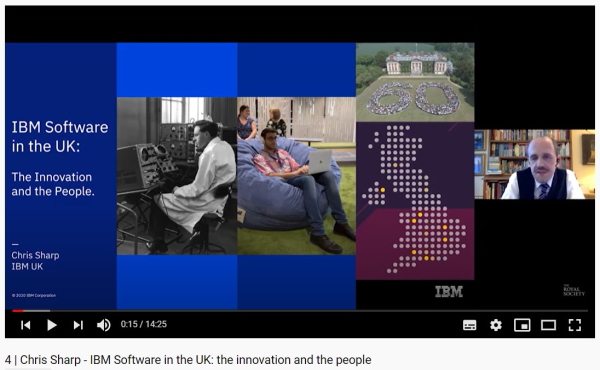 The workshop initially went out to an invited audience of around 130, and we’re glad that the videos have now been released for wider viewing. Do enjoy them, and spread the word to any computer historians of your acquaintance. The UK did indeed have a key role in the development of the computer industry in the second half of the twentieth century, and we hope we’ve played a part in preserving for future audiences a record of the major players and their innovations.

(Credit for main image at top: from the personal archive of Liddy Zweers-De Rond; used by kind permission of her son, Onno Zweers. Photographer unknown)