Louisiane Ferlier explains how the work of John Napier (1550-1617) exerted a strong influence on the mathematicians of the early Royal Society.

Everyone in the Royal Society Library team will have a wish list of items they think would complete the collections. One of mine is a set of Napier's bones.

Everyone in the Royal Society Library team will have a wish list of items they think would complete the collections: ‘must-have’ books, manuscripts, paintings, or museum objects they dream of acquiring. One of mine is a set of Napier's bones.

Those not familiar with these objects will be relieved to know that I’m not revealing any morbid fascination for Elizabethan ossuaries, but a more benign interest in early mathematical devices. Napier’s bones are named after John Napier of Merchiston (1550-1617), an illustrious Scottish mathematician who pre-dates the founding of the Royal Society. 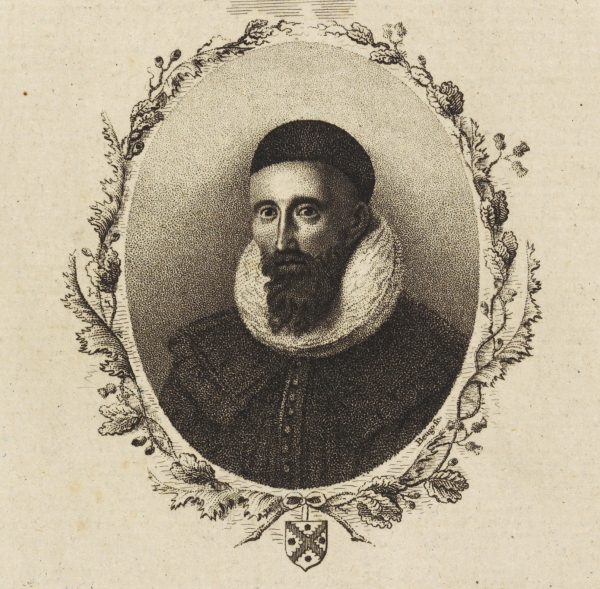 To me, the tools symbolise an intellectual genealogy on which our collections were built. The 'bones’ are in fact engraved rods and need not be made of bone at all. They were designed to speedily multiply, divide and find the roots of numbers. Picture the direct evolutionary step between the abacus and your school calculator, or perhaps a somewhat distant ancestor to modern computers. 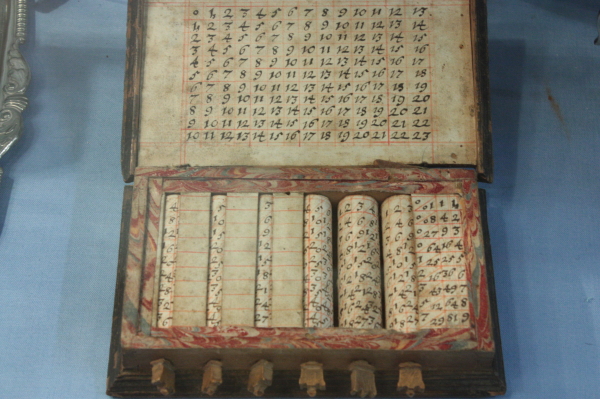 Beyond the fact that these are fascinating objects in themselves, calculating tools were one part of Napier’s larger mathematical arsenal. Indeed, they should be seen in tandem with his great works, Mirifici logarithmorum canonis descriptio (1614) and Logarithmorum canonis descriptio (1620) in which he sets out, first practically then theoretically, what logarithms are. Just like his calculating tools, Napier created a mathematical method which sought to turn the more complex operations of multiplication, division and root extraction into simpler addition and subtraction. 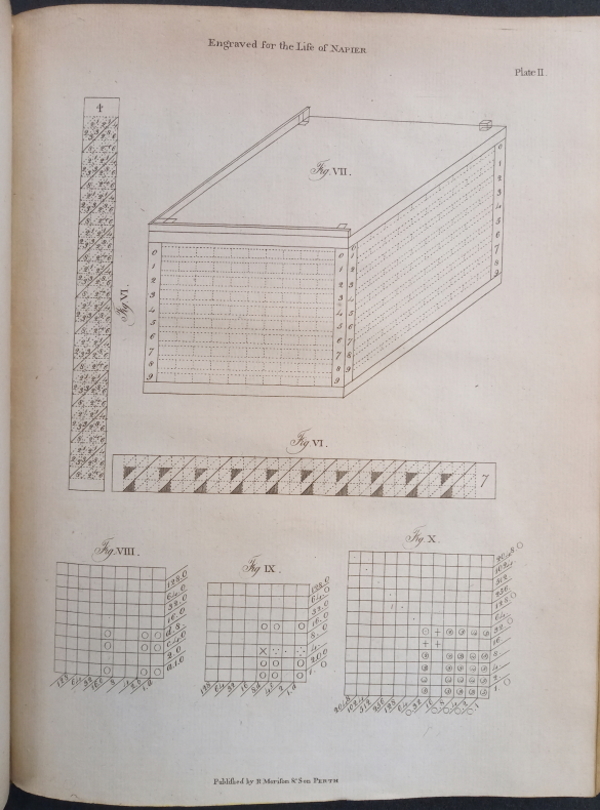 In his 1614 text, Napier is very clear that he seeks to make mathematics available to all. Logarithms, calculating tables and tools are intended to make tedious calculations easier and more reliable, with the aim of supporting practical applications such as navigation, as well as theoretical developments of the discipline. For the sake of space and coherence, I’ll refrain from describing Napier’s wackier pursuits in astrology, his penchant for apocalyptic predictions or the fact that he ‘dabbled in alchemy and necromancy’ - best leave those for the Netflix adaptation.

Napier died long before the Royal Society was founded, but his calculating tools and logarithms remained relevant throughout the seventeenth and eighteenth centuries, and were at the core of the mathematical work of the founder Fellows. Indeed, the story of logarithms is so closely entangled with that of the Royal Society that the editor of a 1705 collection of mathematical tables manages to omit Napier altogether, spelling out the genealogy of logarithms as an all-English team sport:

‘To lead the Reader on from the Beginning, we give him the 12th Chapter of Dr. Wallis’ Algebra, which treats of the Original of Logarithms, and gives a full History of their Progress, to this is subjoyn’d Mr. Halley’s Compendious Method of making Logarithms, which proceeds abstractedly from the Nature of Numbers … from which is deduced for practice the making of the Natural and Mr. Briggs': With the further Prosecution of the same Subject, generously Communicated by the ingenious and unwearied Mr. Abr. Sharp, with his Table of Logarithms to above Fifty Figures.’

It is in fact based on his discussions with Napier that an admiring Henry Briggs, professor of mathematics at Gresham College, refined Napier’s logarithms to suggest in his Arithmetica logarithmica that base 10 would be more useful. Subsequent generations of mathematicians, including John Wallis, Edmond Halley and Isaac Newton, expanded the reach of logarithmic calculations and demonstrated how useful they were for applied physical fields and for the advancement of calculus – but the work all stemmed from Napier’s roots.

The importance of this intellectual genealogy was brought home to me at a session, entitled ‘Practices of Mathematical Antiquaries’, that I was honored to chair at the annual conference of the British Society for the History of Mathematics in July. Although some may think of the history of mathematics as a straightforward progression where each generation adds to previous work, it is in fact, like all sciences, the result of fervent exchanges, controversies, games. An effervescence perhaps best embodied in objects. 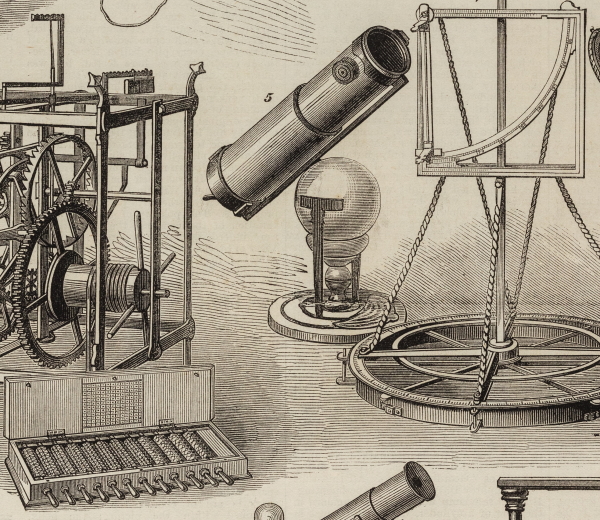 Napier’s calculating device (bottom left) with Newton’s telescope in the ‘Historical treasures’ of the 1876 International Exhibition at South Kensington.

Within the collections of the Royal Society, you can find mathematical ideas emerging through correspondence or influenced by the exchange of books. For instance, let’s not forget that Gresham College, where Briggs wrote his treatises and taught Napier’s logarithms, was the first home of the Royal Society and the academic institution of many of its Fellows. It’s more difficult, however, to find the more mundane yet entertaining paraphernalia of mathematics in our collections. This is why, if anyone has a spare set of Napier’s bones, they should definitely consider donating them to the Royal Society! 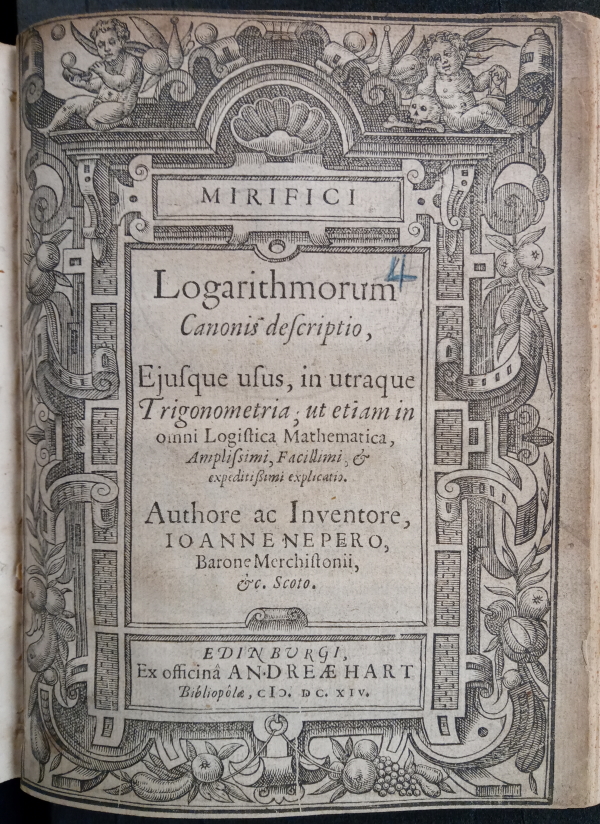