The craze for ballooning took off in 1783, but some Fellows of the Royal Society kept their distance, as Vannis Jones Rahi discovers.

An unpiloted balloon landed in the French village of Gonesse, terrifying the villagers who thought it was either a sea monster or the Devil ‘in a form he had never before appeared in’. 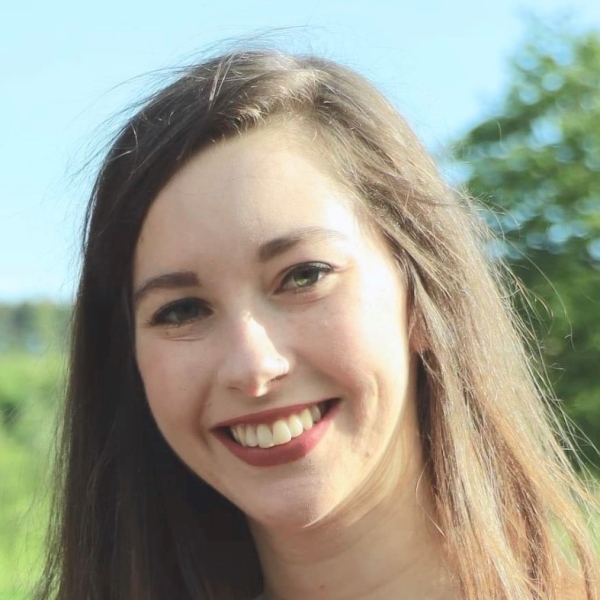 Vannis joined the Royal Society in October 2021 as the Archive Cataloguer on the Science in the Making digitisation project, responsible for cataloguing the treasure trove of collections relating to the Royal Society’s publishing history. She previously worked at Heriot-Watt University, the University of Kansas, and the Lothian Health Services Archive.

Humans have dreamed of flight since time immemorial. For many, this desire came less from an interest in scientific endeavours only achievable at great heights, such as the study of the atmosphere, and more from the possibility of adventure and the unimaginable novelty of soaring in the air like a bird.

Our vision of what these flying machines might look like has changed dramatically over time. An early pioneer in aeronautics, Francesco Lana de Terzi, published designs in 1670 for a flying boat with a sail and four masts, each topped with a copper foil globe. They attracted the attention of Robert Hooke FRS, who published a partial translation of Lana’s work and related commentary in the Philosophical Collections. Despite this interest, it took another century for flight to become a reality. The first hot air balloon as we know it was launched in 1783 by the Montgolfier brothers, Joseph-Michel and Jacques-Étienne, beginning a short-lived but enthusiastic balloon craze in France, Britain and beyond. Vincenzo Lunardi and James Tytler led the way in Britain, their high-profile ascents provoking fascination and speculation alike from the public, royals and natural philosophers. Female passengers in the early months of the frenzy, such as Élisabeth Thible and Citoyenne Henri, paved the way for the successful career of the first professional female balloonist, Sophie Blanchard, in the early nineteenth century. Developments in ballooning were followed closely by numerous Fellows of the Royal Society, among them Charles Blagden and Benjamin Franklin. Despite their intrigue, few dipped their toes into the practical side, seemingly undecided on whether balloons represented scientific advancement or simply a flashy new spectacle to entertain the masses. The Montgolfiers’ successful first flight triggered a race to develop the most resilient and efficient balloons. Their key competitors, also based in France, were Anne-Jean and Nicolas-Louis Robert, known as the Robert brothers, who designed a balloon for Jacques Charles. Both consisted of paper, linen or taffeta, varnished with various types of oils and gums. The fundamental difference between the two was the ‘lighter than air’ component within the envelope: the ‘Montgolfière’ type was raised by hot air from burning straw, and the Roberts’ balloons by hydrogen created by pouring sulfuric acid over iron filings.

While perhaps the most successful, the Montgolfiers and the Roberts were certainly not the only inventors designing flying machines. Many other (at times comical) configurations appeared, some of which were submitted to the Royal Society. Henry Smeathman, having witnessed the Montgolfiers’ balloon demonstrations in France, was inspired to create his own arrangement with wings on either side, decorated with a lion, a unicorn and a Saint George’s Cross, shown below. Smeathman’s designs were never published, nor was the balloon ever constructed. 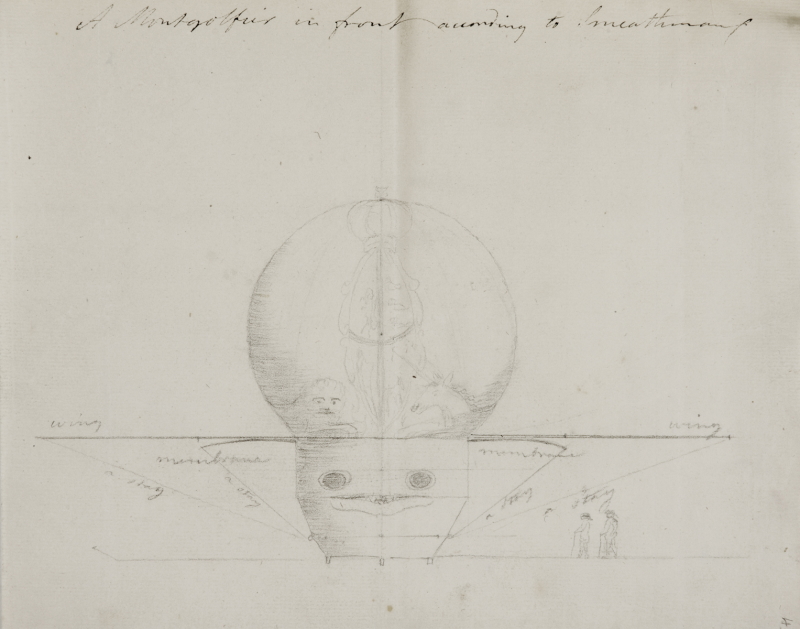 Public balloon ascents thrilled and delighted eighteenth-century society. Hundreds of thousands would flock to launch sites hoping to catch a glimpse of men and women sailing off into the clouds. The launches were truly democratic events – whilst tickets were sold for prime spots, once the balloon was in the air, anyone for miles around could experience the marvel in the sky.

Outside the city, however, where word had not yet spread of the flying invention, balloons were received with trepidation. An unpiloted Montgolfière landed in the French village of Gonesse in 1783, terrifying the villagers who, according to a Miss Delessert in her letter to Blagden, thought it was either a sea monster or the Devil ‘in a form he had never before appeared in’. The villagers enthusiastically attacked the balloon with stones and knives before finding a note placed inside requesting its safe return to Paris in exchange for a reward. Oops! Grand purposes were put forward for balloons. Thomas Baldwin suggested in his account of a solo ascent that they could be used as military signals (as indeed they have been), to transport heavy loads, or to create an unexplained ‘Wind-Gun’. Benjamin Franklin, writing to Sir Joseph Banks PRS on developments in France, explained that some enthusiasts had suggested attaching balloons to a running footman or a horse, enabling the man or animal to travel ‘as fast as the wind’. Others, he said, thought balloons might be used to preserve meat or make ice, as air is colder at higher altitudes. 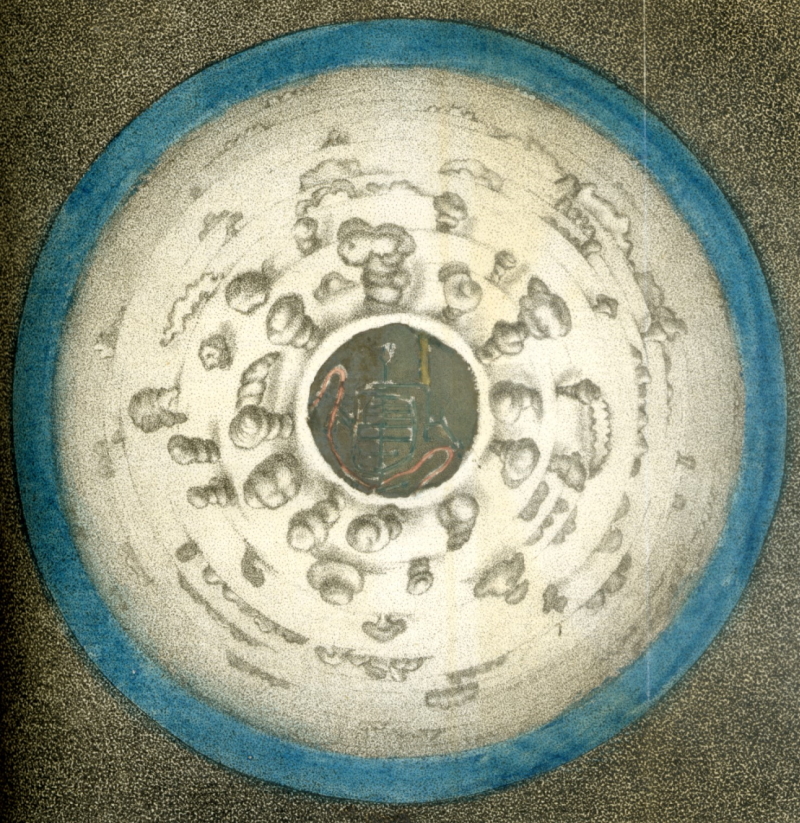 A balloonist’s view of Chester, from Baldwin’s Airopaidia (RCN 26300)

The Royal Society kept its distance from ballooning, possibly in part due to Banks’s reservations regarding the scientific relevance of the new craze. Banks wrote scathingly of the first pioneers in letters to Blagden, complaining that Lunardi had made no real meteorological observations in his pursuits of ‘the art of delivering [himself] over to the command of the wind’ and on another occasion writing that it was ‘wondrous how many people have been tolerably at their ease in the air without making one observation worth a groat’. It seems that the scientific innovation encapsulated in the mere creation of these flying machines, a veritable achievement marrying chemistry and hydraulics, was perhaps lost on some.

While Banks’s criticisms were certainly true to an extent – there were many balloonists who sought simply to fly higher, farther and longer – there were also those, like Baldwin, who did ascend to make scientific observations. The problems faced by aeronauts were simple: multitasking was hard, and balloons were deadly. Accidents were common, and piloting was no easy endeavour, requiring near-constant attention to ensure the balloon avoided obstacles and remained afloat, making it challenging to simultaneously take meaningful observations. As Clare Brant writes in her book on the craze in Britain, ‘survival was the point, not science.’

Interest in ballooning steadily tapered off throughout the final years of the eighteenth century and the first half of the nineteenth. It became obvious to the public that balloons could not and would not be a reliable form of transport, given their vulnerability to changes in the weather and reliance on the skill of their pilots. It was clear, too, that the perils of flight outweighed the benefits offered by airborne scientific observation. Generally, crewed balloons remained an activity reserved for adventurers who sought to break records for distance travelled, elevation and flight time.

The Royal Society did show brief interest in the mid-nineteenth century with the formation of a Balloon Committee, which met on precisely one occasion in 1837. The Committee planned an ascent to make meteorological observations, discussing cost and instruments required, with four Fellows offering to ascend, but it seems that the plan never came to fruition.

Fifteen years later, our final flirtation was a grant offered to meteorologist John Welsh in 1852 for four flights from Vauxhall undertaken with accomplished balloonist Charles Green as the pilot. Welsh’s observations resulted in a single article in the Philosophical Transactions the following year, marking the end of the Royal Society’s involvement in ballooning.