Air, land, and sea—climate change and past Fellows of the Royal Society

A new special collection of biographical memoirs looks back on the history of climate and sustainability science from the 1950s to present day.

Understanding the causes and consequences of climate change through Biographical Memoirs of Fellows of the Royal Society.

A new special collection of Biographical Memoirs, entitled Climate and sustainability, features a broad range of expertise—from meteorologists and oceanographers, to soil and plant scientists. This diverse mixture of talent hints at the complexity of the challenge the world faces, and the array of sustainable solutions required to combat the change.

Here we focus on the achievements in climate change science of past Fellows and Foreign Members of the Royal Society, across the realms of air, land and sea…

Our planet’s atmosphere protects and sustains life on the surface. In the late 20th century, scientists from different disciplines were uncovering the mechanisms of this protective role.

The ozone layer in the Earth’s stratosphere protects life from the sun’s harmful radiation. Signs of ozone layer depletion in the 1970s caught the attention of atmospheric chemists from around the world: Paul J. Crutzen (ForMemRS 2006) discovered the damaging role of nitrogen oxides, whilst Frank ‘Sherry’ Rowland (ForMemRS 2004), with Mario Molina, did the same for chloroflurocarbons (CFCs). Together, these three scientists were awarded the 1995 Nobel Prize in Chemistry for their ground-breaking work "in atmospheric chemistry, particularly concerning the formation and decomposition of ozone”. Ozone depleting substances also act as greenhouse gases, and so policies that have since reduced emissions of ozone-damaging chemicals, have also helped to protect the climate from warming.

Paul Crutzen went on to investigate the links between atmospheric chemistry and global warming, and would also coin the term ‘Anthropocene’ to describe the current epoch in geological time—a term now inextricably linked with the negative connotations of humanity’s impact on the Earth’s climate and environment.

The impact of anthropogenic greenhouse gas emissions—particularly carbon dioxide—on our atmosphere’s temperature-regulating role has increasingly held the attention of the scientific community from the 1950s onwards. Polymath Freeman Dyson (FRS 1952)—perhaps better known for his work on quantum electrodynamics—attended a climate dynamics conference in 1955 that addressed the impact of post-industrial revolution CO2 levels, and included an opening address from J. Robert Oppenheimer (ForMemRS 1962). 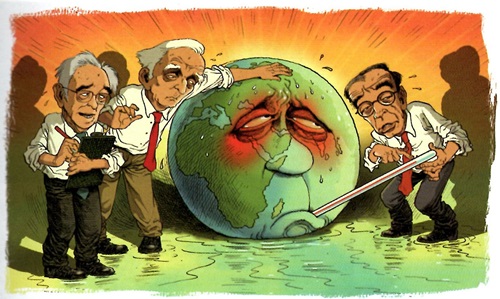 In the same period as the ozone-depletion atmospheric chemistry discoveries, atmospheric physicist Sir John Houghton (FRS 1972) was investigating the structure and temperature of the stratosphere. Following a period as director general for the UK Meteorological Office (1983-1991), Sir John’s experience placed him in a prime position to become a key figure in the growing global climate change movement. In 1988, the Intergovernmental Panel on Climate Change (IPCC) was launched, with John leading the scientific evidence working group. By 1990, the IPCC had published its first report underlining the importance of climate change as a challenge with global consequences and requiring international cooperation.

What role do plants, and the soil they grow in, play in atmospheric carbon dioxide levels and climate change?

The role of soil carbon stocks in the context of climate change was a core research area for soil scientist David Jenkinson (FRS 1991). In 1991, he provided the “first quantitative assessment of the reinforcement, or positive feedback, to climate change through increased decomposition of soil organic carbon in a warmer world.” In 2010 he published a general guide aimed at non-specialists entitled Climate change - a brief introduction for scientists and engineers or anyone else who has to do something about it.

CO2 release from plant matter. Figure 1 from ‘The turnover of organic carbon and nitrogen in soil' by D.S. Jenkinson

Plant ecologist and physiologist Paul Jarvis (FRS 1997) investigated water and CO2 exchange between forests and the atmosphere. This pioneering work highlighted the role of forests in the climate system—a role that he would go on to advise the UK government on with regards to combating climate change.

Recognising and responding to contemporary climate change also requires an understanding of past climates. Palaeobotanist William Chaloner (FRS 1976) recognised that the plant fossil record provided direct recordings of carbon dioxide levels: “valuable ‘biosensors’ of ancient atmospheric composition allowing investigation of the link between the greenhouse effect and past warm climates.”

The ocean-climate relationship is another key piece in the climate puzzle: oceans are mediators of temperature and weather, and the risk of rising sea levels is one of the most apparent and critical consequences of a warming world.

This relationship attracted ocean physicist Robert Stewart (FRS 1970). He played an influential role in international organisations (including the Committee on Climate Change and the Oceans) and was a proponent for understanding the ocean’s impact on global warming amidst growing concerns in the early 90s.

The life contained within our oceans is also of significance. Michael Fasham (FRS 2000) pioneered marine ecosystem models that studied nutrient and carbon cycling in oceans, expanding our understanding of these important marine networks. The detrimental impact of climate change on marine life, however, is threatening this mechanism of carbon sequestration.

Inferring palaeotemperatures from oxygen isotope data. Figure 1 from ‘The last interglacial in the marine and terrestrial records’ by N.J. Shackleton

Similar to William Chaloner, Sir Nicholas Shackleton (FRS 1985) (Antarctic explorer Ernest Shackleton’s great nephew), began his pioneering career in palaeoceanography by inferring past temperatures from marine fossil isotope data. With others, he went on to identify the correlation between ancient climate data and variations in the Earth’s position relative to the sun, as described in the 1976 seminal work, Variations in the Earth's orbit: Pacemaker of the ice ages. His isotope record research across oceans and ice also highlighted the relationship between carbon dioxide levels and the climate. Together, his work increased our understanding of the Earth’s natural climate system, which is key to addressing anthropogenic climate change.

From climate change to land sustainability, browse all the memoirs featured in the new special collection. Biographical memoirs are published online as they are ready before being compiled into two volumes per year. Sign up for alerts or keep an eye on our website for new memoirs as they appear.

CO2 release from plant matter. Figure 1 from ‘The turnover of organic carbon and nitrogen in soil’ by D.S. Jenkinson

Inferring palaeotemperatures from oxygen isotope data. Figure 1 from ‘The last interglacial in the marine and terrestrial records’ by N.J. Shackleton