Being transgender in STEM

Dr Julia E Stawarz discusses her experiences transitioning within academia, and her life in STEM.

'Not everyone has a positive experience coming out and transitioning within academia – be that due to a lack of supportive supervisors, departments, and institutions or the multitude of other intersectional aspects of life that that may interact with one’s transition in complex and nuanced ways – which can make things even more challenging and impose unnecessary barriers to a career in science.' 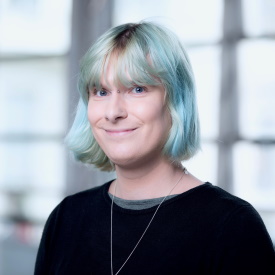 Dr Julia E Stawarz’ s research focuses on using spacecraft observations to study the fundamental physics of plasma turbulence and magnetic reconnection and how they impact the interaction between the Sun and the Earth.

My experiences of becoming a space plasma physicist and an openly transgender women were intrinsically intertwined. I came out as transgender and began my transition in the midst of working toward my undergraduate and doctoral degrees. Coming out as transgender can be both a profoundly liberating and particularly stressful experience, relieving the turmoil associated with hiding who you are and living an inauthentic life while simultaneously requiring you to deal with a plethora of barriers and anxiety-filled situations. When I came out professionally, I had already started doing research and publishing academic papers in the field of space physics, which meant that, in my case, there were both the usual transition related challenges, but also hurdles specifically related to transitioning within academia.

Even without taking into account the unfortunately real possibility of explicitly discriminatory actions or hurtful comments, navigating how to come out to my supervisors, colleagues, and department and worrying about how they would react was a mentally exhausting task. Academic careers also often involve moving from institution to institution, particularly at earlier career stages, as well as traveling for conferences and collaborations to countries that may have varying views toward trans people. As such, considering how people may react to me being transgender and whether I will be in a safe situation in a particular location has been an ongoing worry at times.

Beyond initially coming out, transitioning can involve a range of tedious tasks, some of which are specific to academia, such as changing the information associated with academic records and updating the name on previous publications such that it accurately reflects who did the research (fortunately, becoming possible with more and more journals in recent years). These tasks can be time consuming to sort through and, in some cases, have poorly established procedures or, even when procedures do exist, they may be difficult to track down or staff may be unfamiliar with them, which leads to wasted time and excessive anxiety. At the time that I came out, while I knew of some prominent trans people in STEM fields and had trans friends outside of my professional life, I didn’t know many trans colleagues personally that may have been able to provide guidance on how to navigate some of these issues. Fortunately, this has changed in the years since I came out as transgender; however, it highlights the need to support the visibility of the trans community in STEM, not only to provide examples of successful trans individuals for those thinking of pursuing a career in science, but also to foster local networks of support within the scientific community.

In many ways I was fortunate during my transition. I was in a relatively accepting area at the time and was able to find (sometimes in surprising places) a supportive set of friends, colleagues, and PhD supervisors, that ultimately made my transition a positive experience. At the same time, transitioning in conjunction with the already demanding act of working toward a PhD in physics was an incredibly challenging time in my life, which took a toll on my mental health and made me question whether continuing in science was the right decision at times. Unfortunately, not everyone has a positive experience coming out and transitioning within academia – be that due to a lack of supportive supervisors, departments, and institutions or the multitude of other intersectional aspects of life that that may interact with one’s transition in complex and nuanced ways – which can make things even more challenging and impose unnecessary barriers to a career in science. For many people, LGBTQ+ people in particular, university can be a time of self-reflection and self-discovery and as academics, trans or otherwise, we are in a unique position to provide the support that can make this a positive experience.

Transgender Awareness Week culminates with the Transgender Day of Remembrance, where we remember those that have been victims of transphobic violence, and which is a profound reminder of the impact that the intersection of different spheres of marginalisation – such as gender, sexual orientation, race, ethnicity, and class – can have. As a scientific community, striving to make academia a more supportive and inclusive environment, not only for trans people, but for all marginalised groups is just the right thing to do. Despite some people espousing the rhetoric that scientists should just focus on doing science when issues relating to equity, inclusion, and the visibility of marginalised groups are discussed, the role of our academic and research institutions, professional societies, such as the Royal Society, and the scientific community as a whole is to create an environment that allows everyone to do the best science possible. Creating such an environment requires continually working to remove the unnecessary barriers that stand in the way of trans people and other marginalised groups and actively providing the support and resources that will enable everyone to be successful.