I remember using negatives as bookmarks myself, but it was quite unexpected and touching to find these family images in our book collections, which usually preserve scientific work rather than the personal lives of our Fellows.

‘The first law of Library Science, like the first law of any other science, embodies an elemental truth … BOOKS ARE FOR USE’: wise words from Shiyali Ramamrita Ranganathan, known in India as the father of library science. They come from his landmark 1931 publication The Five laws of library science, intended to promote the library movement across India and give some theoretical underpinning to the discipline.

Ranganathan went on to describe libraries as the stage for a constant struggle between the preservation of volumes and the risks involved with providing access to them. The Royal Society collections certainly reflect how readers have used (and sometimes abused) books in a multitude of ways over several centuries.

The corollary to Ranganathan’s first law is that reading usually leaves its marks on books: their spines soften or break with repeated opening, the pages get stained with ink, tobacco, chemicals or coffee, the margins are used to cross-reference, comment or doodle. Lately, I've been ferreting through the shelves not for annotations or stains but ‘things’ that may have been left behind in our printed book collection by previous readers.

It all started with a volume I picked by mistake from our Astronomy section – Darby’s The astronomical observer: a hand-book to the observatory and the common telescope (1864). Its opening page contained some provenance information: ‘From Ms Rosamund Dyson / in memory of J. Dyson, FRS 2 February 1990’ and a strip of negative film was loosely inserted at the end of the introduction: 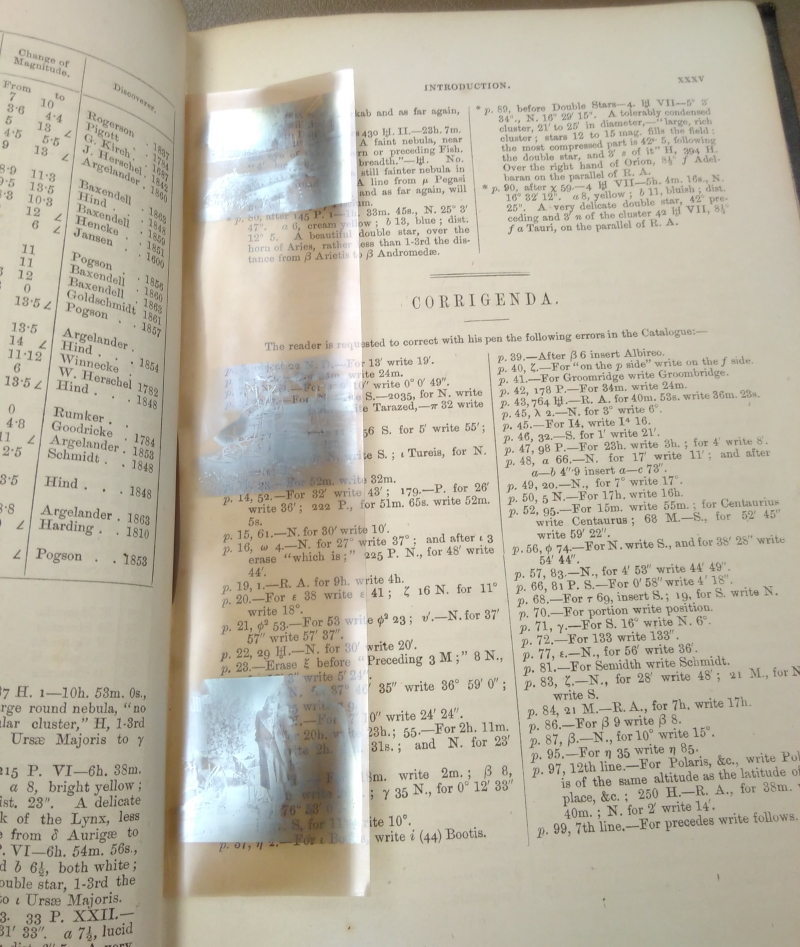 I couldn’t resist the mystery, and soon found out that the donor was Dr Rosamund Dyson-Shuter, a psychologist investigating the effect of music on infant development. She donated the volume very shortly after the passing of her husband, James Dyson FRS (1914-1990), a specialist in optics who designed several high-precision instruments. The negative film contains three family photos taken in a garden, and bears no connection to the text:

The film is coated, and free of perforations, which indicates a personal camera from the first half of the twentieth century. As you can see from the digitised positive images above, the children’s toys and clothes look to be from the 1950s. This would rule it out as a childhood portrait of James Dyson, but it could be of his children. It seems unlikely that Dr Dyson-Shuter intentionally donated the negative as it was inserted flush in the pages and marked the end of a section.

I remember using 35mm negatives as bookmarks myself, but it was quite unexpected and touching to find these family images in our book collections, which usually preserve scientific work rather than the personal lives of our Fellows. If, through the powers of the internet, we could reunite the photographs with Dr Dyson-Shuter's family, it would make for an even more memorable encounter.

Overall, it’s more common than you’d think to find a bookmark or a piece of paper left inserted in one of our library books. So far, the other bookmarks that I’ve come across, having survived generations of librarian housekeeping, actually relate to the text in which they are inserted, and were kept as meaningful interactions with the volume. For instance, in our very used and battered copy of John Ruskin’s The stones of Venice, someone copied out some of the architraves, friezes and cornices on a bookmark inserted between the pages of chapter XXIII, ‘The edge and fillet’: 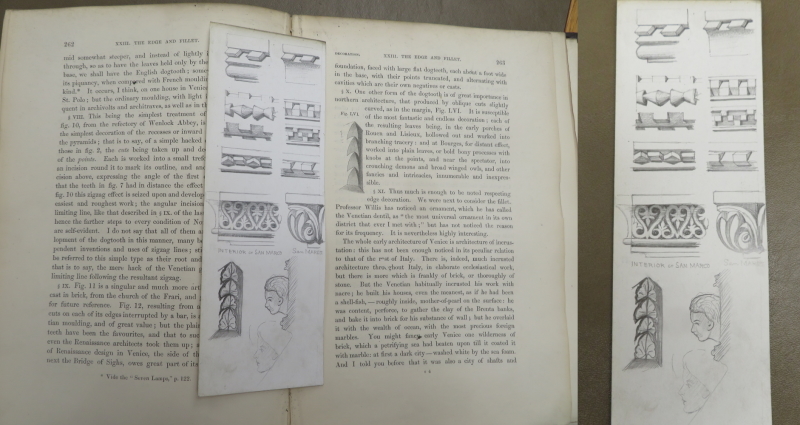 The final example opens a new line of questioning. Another pencil drawing (at least these readers were following our ‘pencils only when consulting material’ rule!), it shows an armoured fossil fish, and was found loosely inserted between pages 36 and 37 of Louis Agassiz’s Recherches sur les poissons fossiles, volume one: 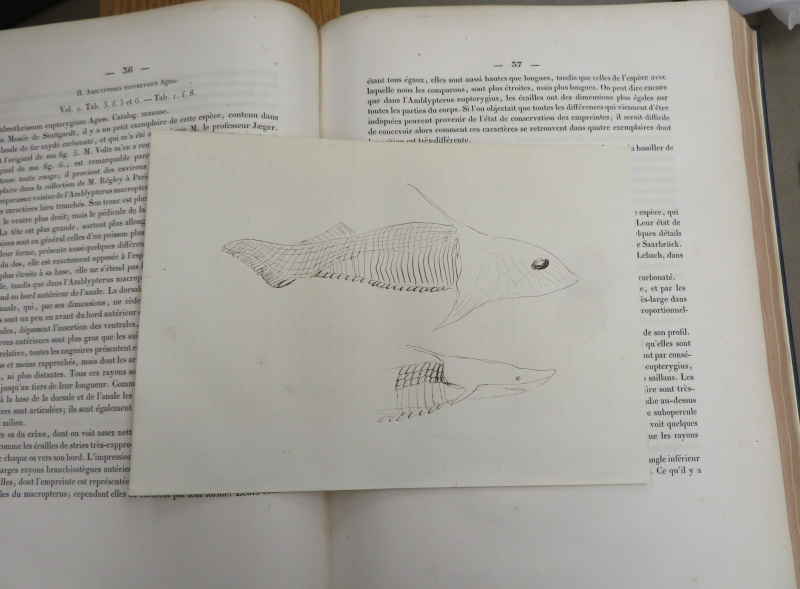 The drawing was not inserted in a passage related to the specific Placodermi fossil fish, as the pages describe collections of fossil fish in Britain in general terms; from my brief comparison, the fishes themselves do not seem to have been copied from the plates of Agassiz’s accompanying atlas volumes. Unlike the Ruskin reader, who appears to have added drawings to the bookmark progressively as they read, this reader augmented or cross-checked Agassiz’s overview of fossil fish by inserting a type not described yet. On a nearly unrelated note, an exhibition is currently on display in London, in response to Agassiz’s scientific racism, showing again that works can provoke a variety of responses in their readers.

The three bookmarked volumes are a good reminder of Ranganathan’s final law: ‘the library is a growing organism’. The Royal Society Library has grown over the centuries thanks to donations of books from Fellows, and these personal books often tell us how they read. And, sometimes, a donor or borrower may introduce a new organism within this live ecosystem, to intrigue and amuse future librarians and readers!