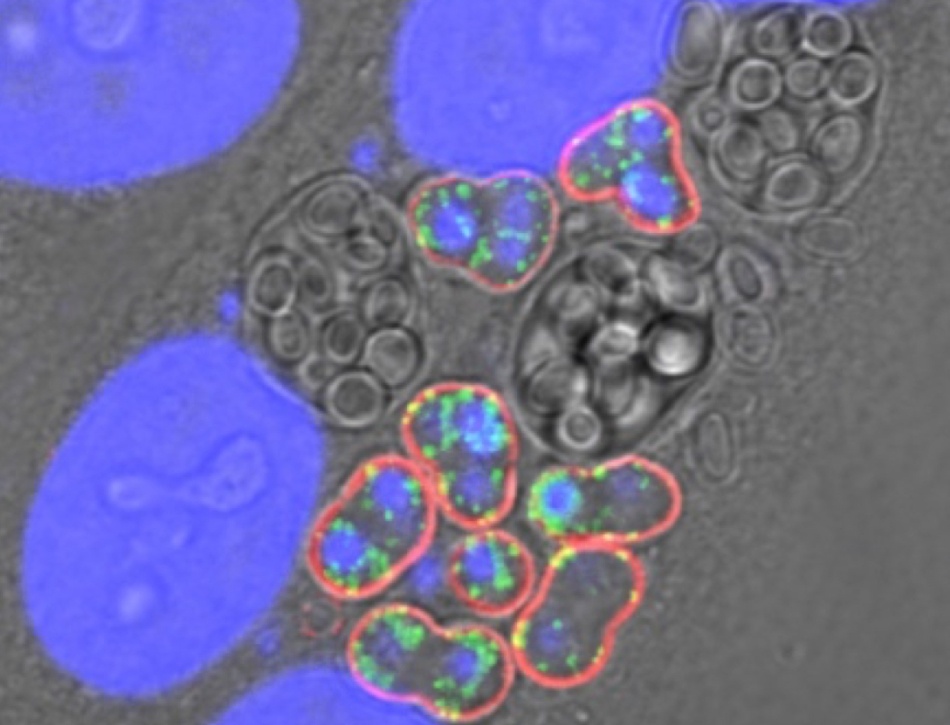 Micrograph showing obligate intracellular Microsporidia parasites growing inside mammalian cells. The red dye binds to a membrane transporter that the parasites use to steal energy from the host cell, the green dots are the tiny minimal mitochondria of the parasite that, unlike our own mitochondria, can no longer make energy. The mammalian host cell nuclei (large blue objects) and parasite nuclei (smaller objects inside the parasites) and bags full of parasite spores are also shown. Martin Embley has used Microsporidia, which also infect humans, as a model system in his research investigating the origin and evolution of eukaryotes and mitochondria. The original image and additional data from his lab can be found in Heinz et al. (2014). PLoS pathogens 10 (12), e1004547. 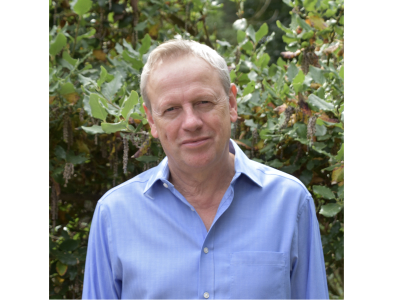 The Darwin Medal 2022 is awarded to Professor Martin Embley FMedSci FRS for his fundamental, paradigm-changing contributions to the understanding of mitochondrial endosymbiosis and the origins of eukaryotes in a new two-domain tree of life.

The Darwin Medal is awarded for work of distinction in evolution, biological diversity and developmental, population and organismal biology. The Darwin Medal was created in memory of Charles Darwin FRS and was first awarded in 1890 to noted biologist and naturalist Alfred Russel Wallace FRS 'for his independent origination of the theory of the origin of species by natural selection.' The medal is of silver gilt, was awarded biennially until 2018 and is now awarded annually, and is accompanied by a gift of £2,000.

The Darwin medal is open to UK/Commonwealth/Republic of Ireland citizens or those who have been residents for three or more years. There are no restrictions on career stage and nominations will remain valid and shall be considered by the award selection committee throughout three nomination cycles. Teams or groups may now be nominated for this award.

Nominations are now closed. Nominations will reopen in November 2022.

Professor Dolph Schluter FRS was awarded the Darwin Medal 2021 for major and fundamental contributions to the understanding of the how species originate, adaptive radiations develop, and geographical patterns of biodiversity emerge and are maintained.

Professor Robert Martienssen FRS was awarded the Darwin Medal 2020 for outstanding contributions to genetics and epigenetics, including defining the role of RNA interference in inherited gene silencing and in genomic stability in the germ line.

Professor Peter Holland FRS was awarded the Darwin Medal 2019 for his work with many organisms and genes elucidating key aspects of how changes in the genome influence evolution of animal development.

See full list of all past winners of the Darwin Medal.