A figure containing the modelling produced by the committee SPI-M-O in July 2021 on hospital admissions, showing data up to 15 September 2021. This figure updated every week until October. There are 12 scenarios, each shaded, on the figure. The peak of individual scenario and range are shown by the vertical lines. Note the log scale. 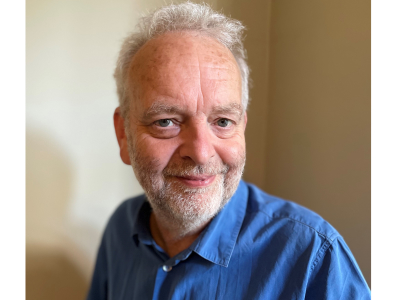 The Gabor Medal 2022 is awarded to Professor Graham Medley OBE for leading an interdisciplinary team of biologists, clinicians, mathematicians and statisticians who provided SAGE with epidemiological modelling expertise concerning the COVID-19 pandemic.

The Gabor Medal is now awarded annually for distinction of interdisciplinary work between the life sciences with other disciplines. The award was created in memory of the engineer Dennis Gabor FRS (PDF), Nobel Prize winner and inventor of holography. The first award was made in 1989. The medal is of silver gilt, is awarded annually and is accompanied by a gift of £2,000.

The Gabor medal is open to UK/Commonwealth/Republic of Ireland citizens or those who have been residents for three or more years. There are no restrictions on career stage and nominations will remain valid and shall be considered by the award selection committee throughout three nomination cycles. Teams or groups may now be nominated for this award.

Sir Peter Donnelly FMedSci FRS was awarded the Gabor Medal 2021 for his pioneering work in the genomic revolution in human disease research, transforming the understanding of meiotic recombination, and for developing new statistical methods.

Professor David Stuart FMedSci FRS was awarded the Gabor Medal 2020 for his seminal contributions to understanding virus structure and application to vaccine design, as well as driving the application of engineering and physical science to the life sciences.