Other Minds: The Octopus and the Evolution of Intelligent Life by Peter Godfrey-Smith 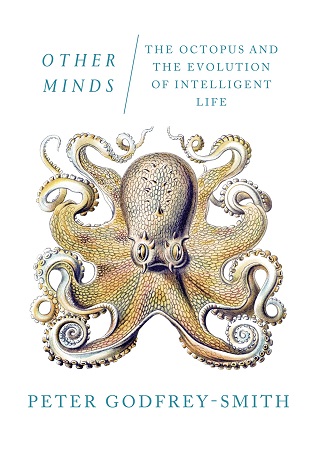 In Other Minds, Peter Godfrey-Smith, a distinguished philosopher of science and a skilled scuba diver, tells a bold new story of how nature became aware of itself – a story that largely occurs in the ocean, where animals first appeared.

Tracking the mind’s fitful development from unruly clumps of seaborne cells to the first evolved nervous systems in ancient relatives of jellyfish, he explores the incredible evolutionary journey of the cephalopods, which began as inconspicuous molluscs who would later abandon their shells to rise above the ocean floor, searching for prey and acquiring the greater intelligence needed to do so – a journey completely independent from the route that mammals and birds would later take.

But what kind of intelligence do cephalopods possess? How did the octopus, a solitary creature with little social life, become so smart? What is it like to have eight tentacles that are so packed with neurons that they virtually ‘think for themselves’? By tracing the question of inner life back to its roots and comparing human beings with our most remarkable animal relatives, Godfrey-Smith casts crucial new light on the octopus mind – and on our own.

Peter Godfrey-Smith, aged 53, is Professor of History and Philosophy of Science, University of Sydney. He is the author of four books, including Darwinian Populations and Natural Selection, which won the 2010 Lakatos Award for an outstanding work on the philosophy of science. His underwater videos of octopuses have been featured in National Geographic and New Scientist. He was born, and currently lives, in Sydney, Australia.

Other Minds is an entertaining tale about the octopus which at the same time tells so much us about ourselves. Clearly and beautifully written, it provides a fascinating close-up look at one species that sheds so much light on our own evolution. Instead of looking to the stars for intelligent life, we should start looking at the life on our own planet.