The Last Stargazers by Emily Levesque 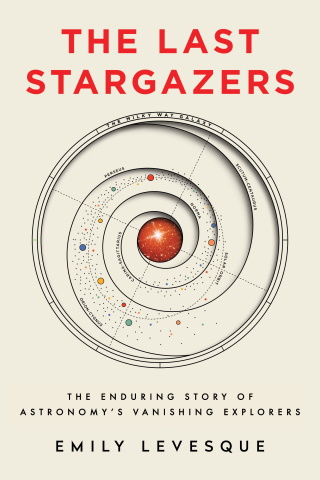 To be an astronomer is to journey to some of the most inaccessible parts of the globe, braving mountain passes, sub-zero temperatures, and hostile flora and fauna.

Not to mention the stress of handling equipment worth millions. It is a life of unique delights and absurdities … and one that may be drawing to a close. Since Galileo first pointed his telescope at the heavens, astronomy has stood as a fount of human creativity and discovery, but soon it will be the robots gazing at the sky while we are left to sift through the data.

In The Last Stargazers, Emily Levesque reveals the hidden world of the professional astronomer. She celebrates an era of ingenuity and curiosity, and asks us to think twice before we cast aside our sense of wonder at the universe.

Emily Levesque is an astronomy professor at the University of Washington. She has won the American Astronomical Society’s Annie Jump Cannon Prize and been named an Alfred P. Sloan Research Fellow in Physics. She is the author of two academic works on astrophysics and has written for Physics Today. Emily lives in Seattle.