Understanding an African lifeline: new analysis of the Congo River

A consortium of UK and African universities has united field measurements with satellite imagery and computer models to provide up-to-date scientific knowledge on the main river channel and wetlands of the Congo Basin. By working together, and with river navigation, management and monitoring authorities, the researchers have unlocked new understanding of Congo River behaviour and change.

The project has sparked the creation of a centre dedicated to researching water resources in the Congo Basin, at the University of Kinshasa in the Democratic Republic of Congo (DRC), and the provision of key hydrological data and models to stakeholders involved with navigation, hydropower and flood management. These developments are testament to the progress made by the consortium in building regional research capacity. 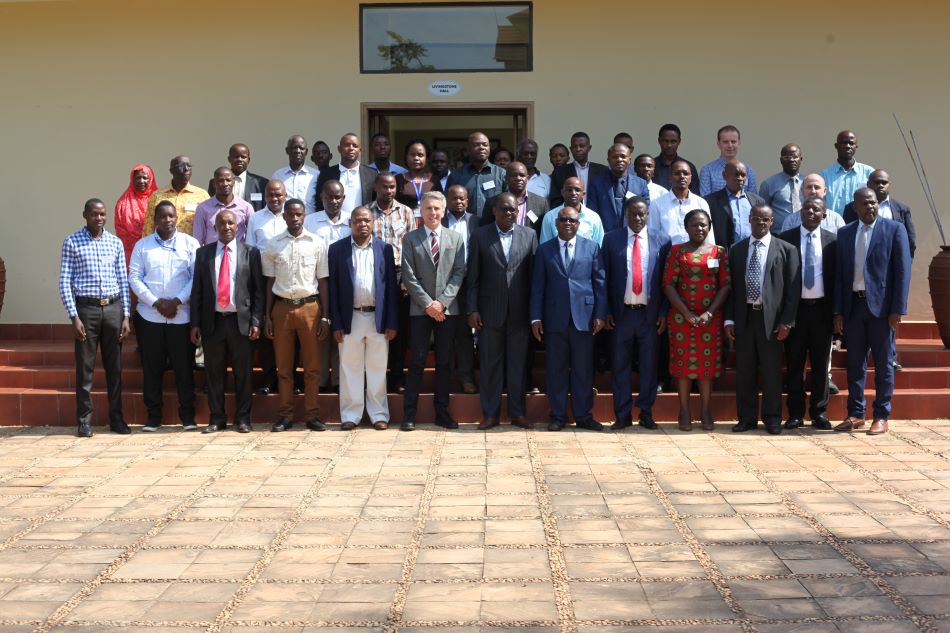 The Congo River is huge – second only to the Amazon in size. It is critical for biodiversity, rural livelihoods, transportation, and nearly all development plans and prospects in the region. But knowledge on the hydrology of the river is lacking, especially after decades of instability in the DRC. Accessing up-to-date equipment and transporting it along seasonally navigable river channels is difficult, and data modelling requires specific software and expertise.

As a result, only a few African universities and public research bodies have gathered and analysed limited data on the Congo River. Policymakers, engineers, water managers and boat handlers have been ill-informed when it comes to how water and sediment in the Congo Basin impacts on water and energy projects, river navigation, wildlife and water resources.

To fill this vast knowledge gap, researchers in the DRC, Tanzania, South Africa and the UK formed a consortium under the Royal Society-FCDO Africa Capacity Building Initiative. Through the Congo River: User Hydraulics and Morphology (CRuHM) consortium, African researchers have accessed the latest remote sensing data, methods and research models, as well as measuring equipment and training in how to use it; while UK researchers have benefited from historical data and local knowledge when studying the Congo River system.

“The project was designed so that we would meet the need for scientific discovery in an area where little research has been done. But we also had the priority of meeting the needs of stakeholders in terms of management and development of water resources. Then, as we went to the field, we also found that we could meet local needs, for instance on flooding.” - Raphael Tshimanga, University of Kinshasa

Stakeholder engagement from the start

The team knew that their research had the potential to not only strengthen academic capacities but also shape countries’ development. Thus the CRuHM consortium engaged stakeholders early on and at all levels, from riverine communities to government officials and international development organisations. These included the DRC’s Régie des Voies Fluviales (RVF), responsible for river navigation and flood forecasting; meteorology and remote sensing agency MettelSat; nine-nation basin authority Commission Internationale du Bassin Congo-Oubangui-Sangha (CICOS); and the Congo Basin Network for Research and Capacity Development in Water Resources (CB-Hydronet).

It all began with a stakeholder mapping exercise that led to a kick-off meeting with these and other interested parties. Their needs and ideas then critically shaped the research framework. The framework, in turn, included different stakeholders in capacity building and shared data collection campaigns.

The stakeholders needed fundamental data on the state of the river. Of more than 400 river gauges installed in the colonial era, fewer than ten were operational in the entire basin. Meanwhile, there were more uses for data than ever: for navigation, hydroelectric development, irrigation, water supply and sanitation, and more. All of these require data from the river’s surface to supplement satellite observations.

The challenges and lessons of engagement

In 2017, the team executed a major two-month fieldwork programme along 700 km of the lower main river channel to collect data for hydrological models. This was the first time that a research team had collected such extensive data and, as such, it produced core datasets previously unavailable for the Congo River. In 2019, the consortium carried out 1,700 km of continuous water surface elevation profiling, the first application of this technique in the basin. The data was combined with remote sensing to establish accurate and detailed water slopes along the Congo – the first use of such a methodology on a river of this scale.

These tasks were complicated by the sheer scale of the basin, its scant infrastructure, and the challenges of deploying advanced technologies out of reach of communication networks and electricity. The fieldwork relied on extremely capable local logistical support and teamwork from all members of the consortium. The team also had to develop skills in negotiating with local stakeholders, building an environment of trust with communities who are used to foreign visitors coming for their natural resources.

The seemingly simple act of installing gauging stations became a focus for this process. In reality, this was not so simple; for every gauge, the team needed to bring together more stakeholders: communities and river users, convened through local chiefs. The researchers took the time to explain the importance of the equipment and train communities to care for the river monitoring infrastructure. These meetings also brought out local needs that reached decision makers through the consortium’s briefs and reports.

Thus stakeholder engagement started with intentional design and logistical need, and became more: a way of engaging with the whole basin context, its people and their issues; of gathering data relevant to the river’s future; and of bringing together expertise from across the region in partnerships of mutual respect.

Through equal collaboration, the three African universities of the consortium increased their hydrological research capacity, with researchers accessing sophisticated analytical equipment and receiving training and mentoring. Along the way, they realised that a new research centre in the region could sustain equitable collaboration and serve as a hub for international research. With an enthusiastic response from the DRC Government and University of Kinshasa, the Centre de Recherche en Ressources en Eau du Bassin du Congo (CRREBaC) was founded. Starting with CRuHM data, CRREBaC will conduct future hydrological research to solve water resource problems in the Congo Basin.

Engagement with RVF also led to a memorandum of understanding for resource and data sharing, training and fieldwork support. Better river flow measurements, together with CRuHM models, help RVF predict river conditions and update navigation charts. This can be life-saving in the Congo Basin, where thousands of people die in boating accidents every year.

Hydropower is another area in which CRuHM is making an impact, as its data is important for managing and mitigating the risks of hydroelectric developments near the river’s outlet. This is especially true of data and scenario analysis on sediment load, which remains a wild card for dam construction; CRuHM found that sediments could be increased by land use changes, deforestation and climate change upriver.

Flood risk, not originally a focus, came out strongly in meetings with local stakeholders. Therefore the researchers incorporated flood risk exposure into the design during the project, and one student is developing further research in the area using project data. RVF’s flood forecasting will benefit from CRuHM data and models, and the World Bank is also looking to make use of flood risk models. CRREBaC has meanwhile begun a project to investigate the stability of the river’s more than 30,000 islands and the effects of human activities on them; this is a crucial topic for sustainable basin development that came directly out of interviews with local river and island users.

Other issues came up frequently in fieldwork, too, like water quality and the health impacts of pollution; widespread, unmonitored deforestation; and bank erosion. Clearly, sustainable development in the Congo Basin will be a long and complex process. It will need to proceed in parallel with a deepening understanding of river processes through equitable research collaborations, led by African scientists.

The Royal Society-FCDO Africa Capacity Building Initiative is a pilot programme managed by the UK’s Foreign, Commonwealth and Development Office, the Royal Society and the Liverpool School of Tropical Medicine Centre for Capacity Research to increase the research capacity of universities and research institutes in sub-Saharan Africa.