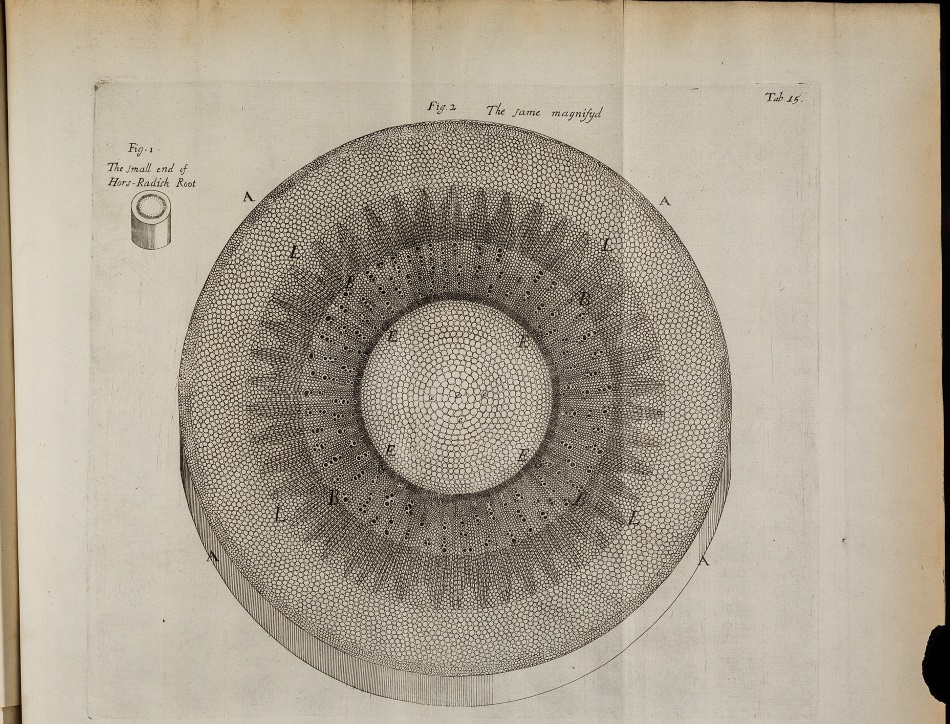 Plate from Nehemiah Grew's work The Anatomy of Plants published in 1682 shows a magnified section of a horse radish stalk.

I am a Ph.D. candidate at the University of British Columbia in the department of Art History, Visual Art and Theory. My work explores visual epistemology, technologies of vision, and representations of nature in seventeenth century scientific illustrations. While working at the Royal Society as Lisa Jardine grant awardee, I was also a visiting researcher at Lincoln University's School of History and Heritage under the supervision of Dr. Anna Marie Roos. My work is additionally supported through the Social Sciences and Humanities Research Council of Canada (SSHRC). I am currently at the Bibliotheca Hertziana – Max Planck Institute for Art History in a predoctoral position in the research group "Visualizing Science in Media Revolutions" lead by Sietske Fransen. While at the Hertziana, I will be working towards the completion of my dissertation, Microscope/Macrocosm: Early Modern Technology, Visualization and Representations of Nature, specifically on the different conceptualizations of the microscopic world as represented in the illustrations of Marcello Malpighi and Nehemiah Grew.

My research at the Royal Society explored the influence of the international exchange of knowledge in the late seventeenth century, as facilitated by the Royal Society, on the development of images of nature and especially microscopic life in scientific illustration. Spending significant time with the original letters, drawings, meeting records and publications allowed me to trace the development of ideas and images through various networks exchange, showing the many forms of collaboration and debate between scholars, physicians and craftspeople that led to the creation of a work like Grew’s Anatomy of Plants (1682).

I focused on points of exchange between Grew and his contemporaries, especially Marcello Malpighi, whose work I am focussing on this year with the research group "Visualizing Science in Media Revolutions” at the Bibliotheca Hertziana – Max Planck Institute. My work at the Royal Society has contributed significantly to the development of that project, through which I not only will produce my doctoral dissertation and eventual publications, but has also led to several conference presentations, including one upcoming at the Universities Art Associations of Canada in Quebec City in October 2019. Additionally, we will be working with images and topics that are a result of both my own research at the Royal Society and Dr. Fransen’s considerable knowledge of the archives obtained through her work with the Making Visible project, an image database that was instrumental for my research this summer. We will be further developing the applications of the image digitization completed through the work of the Making Visible team.

I also began another small project that I hope to develop into a larger research undertaking in the future, looking at visualizations of bladder stones among the Royal Society’s early papers. I aim to produce a short publication with that research sometime in the coming months and eventually hope to work it into an application for postdoctoral research.