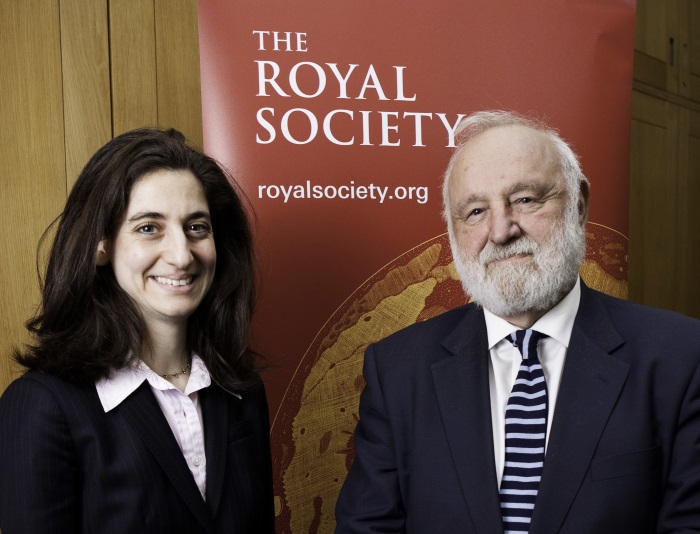 As ever, the Royal Society Pairing Scheme was of great benefit to me.  I think we MPs get the best of the bargain.

In 2013, Dr Karin Shmueli was paired with Frank Dobson, MP for Holborn and St Pancras who was Secretary of State for Health from May 1997 until October 1999. Karin is a Lecturer in Magnetic Resonance Imaging in the Department of Medical Physics and Bioengineering at University College London (UCL). Karin’s research aims to develop new Magnetic Resonance Imaging (MRI) techniques and maximise their potential to offer earlier diagnosis and improved understanding of disease. Her current focus is on creating MRI images sensitive to the magnetic susceptibility of tissues. Tissue magnetic susceptibility depends on its microstructure and composition, e.g. iron content, which is altered in diseases such as Alzheimer’s and Parkinson’s, making MRI susceptibility images a useful tool to investigate the effects of diseases like these.

Karin discusses her experience in Westminster and during the reciprocal visit:

“During a fascinating Week in Westminster we had a packed schedule of lectures on the role of science in Parliament and government. I also had the privilege of shadowing Mr Dobson for two days, gaining a real insight into his role and perspectives as an MP as well as hearing plenty of entertaining anecdotes from his many years in Westminster and his constituency. When Frank came to visit me at UCL I gave him a flavour of my role as a researcher and academic. As well as distilling an explanation of my research into a 10-minute presentation, I showed Frank around the MRI-PET facility in the UCLH Macmillan Cancer Centre. This is the first facility of its kind in the UK and is fully integrated to allow a positron emission tomography (PET) scan to be acquired at the same time as MRI images. Together with my colleague, UCLH Medical Physicist Dr Anna Barnes, we explained the system to Frank as well as the combination of MRI and PET safety precautions. Clinicians and radiographers from the MRI-PET team talked Frank through a plethora of clinical images from the system including dynamic MRI ‘videos’ of a beating heart showing regions of damaged heart muscle that were less mobile than healthy tissue in the cine-MRI and also had lower blood-flow in the PET images.

During the reciprocal visit I introduced Frank to Professor Jem Hebden, the Head of my Department, as well as two PhD students to give him a window into the breadth of research going on here. Professor Hebden showed Frank around the Department and demonstrated some recent optical data from the hospital, showing real-time variations in the oxygenation of babies’ brains detected using near-infra-red light.

As I wanted Frank to appreciate the wider context to my research projects and work in the Department, we also met with the Dean of the UCL faculty of Engineering, Professor Anthony Finkelstein and UCL’s new Provost, Professor Michael Arthur. The discussions ranged from past UCL provosts, UCL’s strength in biomedical science, its global impact and desire to ’Change the World’, to UCL’s role in the local London community, politics and economy, particularly in the light of several huge infrastructure projects planned near UCL in Mr Dobson’s constituency.”

Frank said about his time on the scheme:

“The work that Karin and her colleagues are doing at UCL was a revelation to me. It is important as science, important to the future of healthcare and important to our economic future when we have to compete with the best of the world on the quality of our goods and services – we can’t compete with the cheapest on price.”