The Kavli Royal Society Centre for the Advancement of Science at Chicheley Hall was officially opened on Tuesday 14 September 2010.

Fellows of the Royal Society, including a number of Nobel Prize winners, gathered at the 18th century country home to hear the official dedication of the building and witness the unveiling of a portrait of the Centre's lead donor, Fred Kavli, who is Founder and Chairman of the Kavli Foundation.

Chicheley Hall is a unique and historically significant Grade I listed Georgian country house located in North Buckinghamshire. The Kavli Royal Society International Centre will host a programme of major scientific meetings; including high level ‘round tables’, policy forums at national and international level, and bilateral meetings with other academies. It will also host a programme of science and mathematics education activities to support policy makers and teachers. 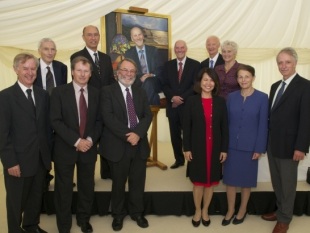 Set within 80 acres of grounds, the venue features 2 lecture halls for approximately 100 delegates each, 4 meeting rooms for up to 25 delegates and 47 bedrooms.