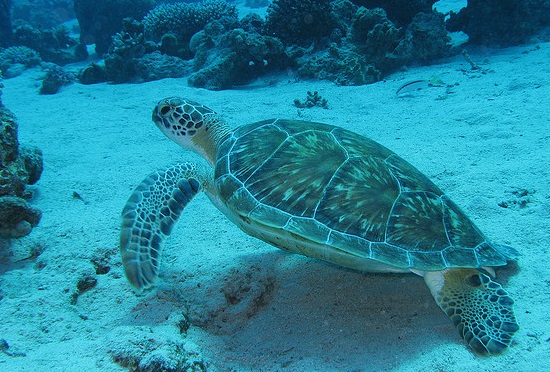 Researchers led by David Pike from James Cook University show that sea water flooding of sea turtle nesting sites could be contributing to declining numbers of turtle hatchings but add that flooding alone doesn’t completely explain the mysterious declines seen at nesting sites over the past decades.

Sea turtles haul themselves out of the sea to lay their eggs on the beach. Rising sea levels, which are predicted as a result of climate change, could mean more frequent flooding of those nesting sites with salt water.

The team collected 262 sea turtle eggs from Raine Island, Australia - the largest green turtle nesting site in the world. Separating the eggs into 4 groups the researchers tested the effects of immersing the eggs for 1 hour, 3 hours or 6 hours. The 4th group was treated as a control and left to develop without flooding.

The team also tested the impact of covering the eggs with saltwater at different stages of development. The results were ambiguous because many of the eggs (45%) died before hatching regardless of treatment. They shrivelled and discoloured - a phenomenon regularly seen on Raine Island where nests consistently have high egg mortality during early development, even when incubation conditions are ideal.

The researchers says it seems the eggs in all stages of development are equally vulnerable to salt water flooding but that the reason for high egg mortality in general remains mystery and that mother turtle health, contaminants passed from mother to egg, or microbes in the soil could all play a part.