The advantage of shorter titles: Should scientists keep it snappy?*

A study published today in Royal Society Open Science has found that scientific papers with short titles tend to get more citations. 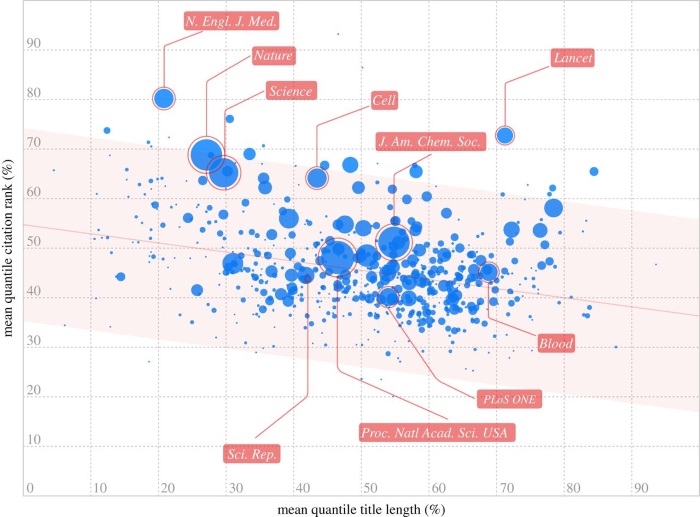 Hundreds of thousands of scientific papers are published every year. Some fade into obscurity while others attract considerable attention and are cited regularly in other scientific articles. The more citations a paper has the more successful it’s deemed to be. The success of papers can have a big impact. Some studies show that the long-term success of scientists depends on their early publications. So stylistically, do short titles spell success?

A team of researchers, led by Dr Adrian Letchford from Warwick Business School’s Data Science Lab, collected data on 140,000 papers from Scopus, an online database of citation records. They collected data for the 20,000 most cited papers each year from 2007 to 2013 and ranked the papers by number of citations and title length, including spaces and punctuation marks. For every year the shorter titles received the most citations.

But titles aren’t everything. Papers in prestigious journals can attract more citations per paper - an average that’s used to calculate a journals impact factor. The team did their analysis again, this time factoring the journal’s prestige. For the years 2007-2010 papers with short titles were cited more. However, for 2011, 2012 and 2013 there wasn’t a correlation between title length and citations.

The results indicate that journals that published papers with shorter titles tended to receive more citations per paper.

The reason for the link is unexplained. The researchers say it could be that high impact journals restrict the length of their papers’ titles or that incremental advances in research, which are unlikely to get lots of citations, tend to be published under longer titles in less prestigious journals. The team also hypothesise that shorter paper titles are easier to read and understand and therefore the papers might have wider readership and influence.

The study published in Royal Society Open Science is the largest of its kind but its sample still only covered between 1.12% and 1.53% of papers published in each of the years studied. Other scientific studies (albeit with smaller sample sizes) have posed a similar question and delivered different results. In fact one 2009 study found the opposite - that longer titles result in more citations.

*Researchers have also studied if using colons or question marks affect the number of citations a paper receives.