Title:Prolonged transition time between colostrum and mature milk in a bear, the giant panda, Ailuropoda melanoleuca

A study published this week in Royal Society Open Science has revealed the complexity of a mother panda’s milk. The mother’s milk changes slowly over time as the cub grows to provide the nourishment it needs. 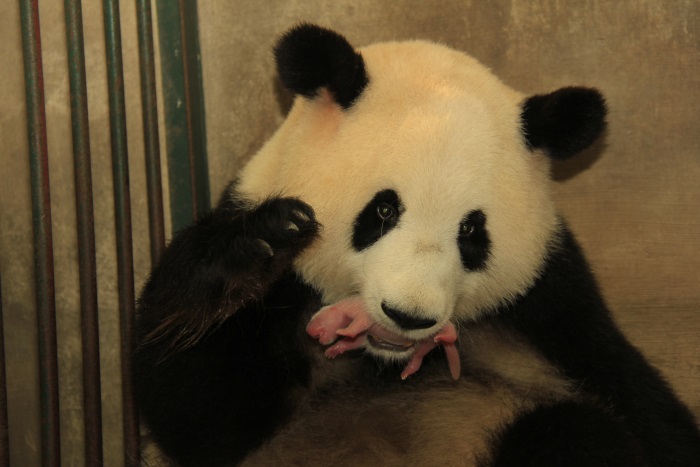 A newly born giant panda cub with its mother, illustrating its highly early stage of development, and the relative size of mother and cub. Bear cubs require an unusually high degree of maternal care compared with other species of placental mammal. (Image credit:Chengdu Research Centre for Giant Panda Breeding)

Giant pandas are born in an extremely early stage of development. They are reliant on their mother’s milk to provide the nutrition they need to grow and a host of antibodies to protect themselves from bacteria.

The researchers studied the milk of 6 giant pandas in a 5 year study. The team monitored the composition of the mother pandas’ milk in samples collected from the birth of a cub to 5 months after birth. The team found that the proteins and other molecules in the milk changed from the first milk a panda produced to mature milk the mother bears provide once their babies are 5 months old.

A type of protein called immunoglobulins are abundant in the milk at first but their proportion reduces over time. The team say that an immunoglobulin called IgA is particularly persistent in the milk and probably plays a protective role for the baby and also the mammary gland of the mother. The researchers say the IgA may also provide important gut bacteria for the baby’s gut.

The researchers also noted that although lactose is present in panda milk when a cub is born it decreases rapidly. The team say this may suggest that cubs lose the ability to digest high-lactose milks about three weeks after birth and add that supplementing a cub’s diet with cow’s milk, which is high in lactose, would be harmful to hand-reared cubs.

The changes in the milk are very slow compared other placental mammals. It takes at least 30 days for a panda cub to move on from the first milk a mother panda produces to mature milk. The study highlights the complexity of the bear’s milk.